Birth of the femme fatale!

They were Hollywood's first female rebels, using their smarts and sexiness to undermine traditonal male power 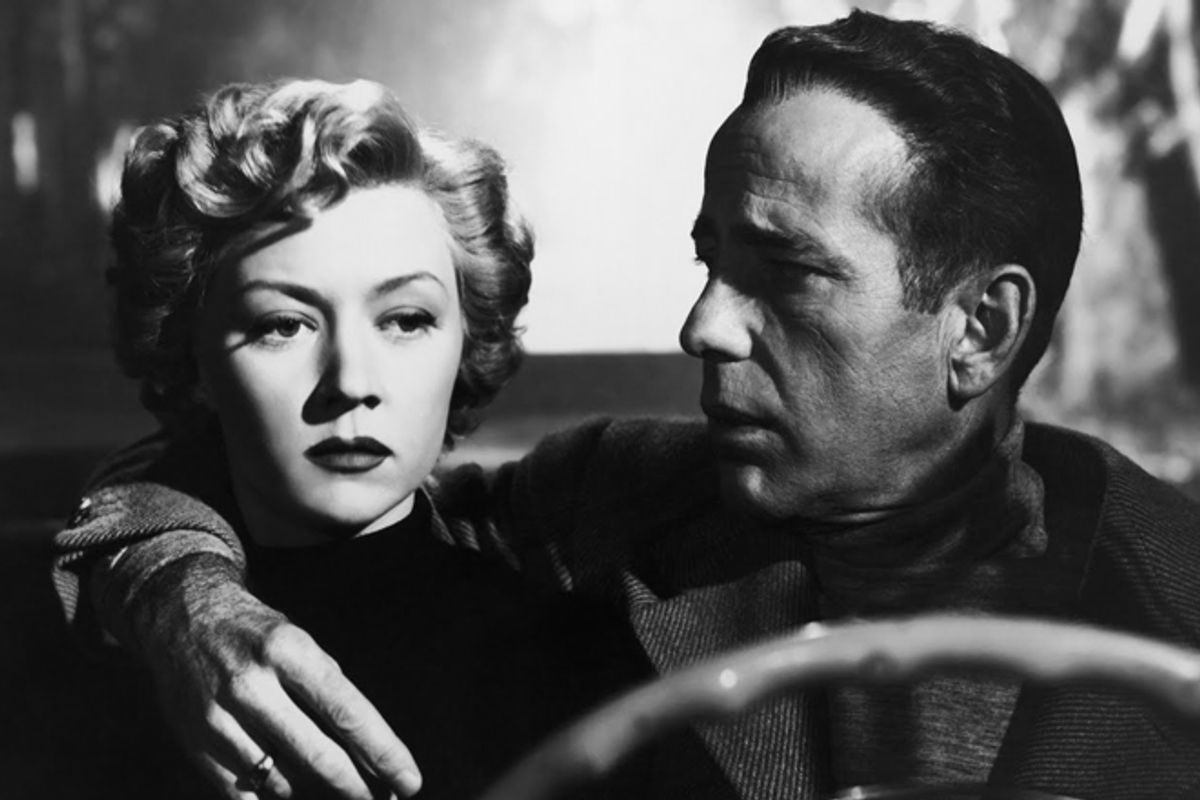 Gloria Grahame and Humphrey Bogart in "In a Lonely Place"
--

Excerpted with permission from "The Noir Forties: The American People from Victory to Cold War"

Film noir was born at the end of the World War II, the product of a confluence of several social, political, and artistic developments. These converged to create the climate in which such films could thrive. But the films themselves were made by a culturally diverse group of individuals — screenwriters, directors, cinematographers, technicians, who contributed their variegated talents and cultural knowledge.

Beginning in the late '30s, some 10,000 European artists, scientists, professors, writers, and other intellectuals, many of them Jews, sought refuge in America. The historian Peter Gay writes that “the exiles Hitler made were the greatest collection of transplanted intellect, talent, and scholarship the world has ever seen.” California welcomed many of these.

Generally, the motion picture industry vouchsafed these émigrés a chance to practice their talents. At the same time, they were seen by the FBI primarily as enemy aliens and potential subversives. One might think that their flight from Nazi persecution would have given them some kind of “home free” card. To the contrary, the FBI, sizing up the liberal or socialist ties inevitable among this staunchly antifascist group, invented a subversive label for them — “communazis.” The bureau shadowed a number of the exiles, including literary giants like Thomas Mann, Klaus Mann, Bertolt Brecht, Erich Maria Remarque, Lion Feuchtwanger and Hermann Broch. They were subjected to surveillance; agents interrogated them about their politics and sex lives; they were threatened with deportation.

And yet, most of them were hired by the studios (or given “lifeline” contracts paying them a stipend until they found film work). Despite cultural and linguistic barriers, not to mention the taboos imposed by studio bosses and the Breen Office, many succeeded in making significant contributions to American cinema. The majority practiced their art or craft and made a variety of films, from anti-Nazi propaganda to films noir.

Jewish directors like Curt and Robert Siodmak, Edgar G. Ulmer, Douglas Sirk, Billy Wilder, Fritz Lang, William Dieterle and Otto Preminger had apprenticed on films shot at the Ufa studios in Berlin in the twenties. They gravitated toward the themes of war, violence, psychosis, amnesia, alienation, fear and flight that recurred in the Weimar cinema. They favored stories about characters wrenched from their homes, as the émigrés had been, or loners bounced about by the blows of fate.

The long shadow of Weimar stretched over time and distance, between Berlin in the '20s and Hollywood in the '40s, from "Caligari" and "The Blue Angel" to "Scarlet Street" and "Double Indemnity." As the film historian Gerd Gemünden writes,

The sensibility of the films which would later be labeled noir certainly entertains close affinities to the sense of loss and cultural despair which many German language exile filmmakers experienced in 1930s and 40s America. These films frequently revolve around questions of (war) trauma, psychosis, memory, and amnesia, split or doubled identity, featuring men driven from their home, outsiders who cannot comprehend the political and social forces that determine their existence. . . .

Starting with Fritz Lang, one of the master filmmakers of Weimar Berlin, author of the silent classics "Metropolis" and “M,” the German émigrés had to varying degrees fallen under the influence of German Expressionism and the “objective,” or documentary, style that followed it. Leading directors like Billy Wilder, Curt and Robert Siodmak, Edgar G. Ulmer, and Fred Zinneman — all had served apprenticeships at the end of the Weimar era.

In his book on Wilder, Gemünden imagines the empathy that the culturally displaced director felt for James M. Cain’s very American hardboiled novel: "Double Indemnity." “This image of southern California as a sterile and culturally shallow place populated by disenfranchised, disconnected, and dishonest people is what must have appealed to Wilder,” who despite his success in Hollywood still felt himself to be an exile.

Quite a few of the actors who emerged as stars in the forties launched their careers in noir because, unlike the famous Gables and Tracys and Davises and Crawfords, their personalities and acting styles were better adapted to projecting its terse “tough” dialogue. Humphrey Bogart, who had played criminals in the thirties and was the romantic leftist soldier of fortune turned saloon keeper in "Casablanca," has been called the “iconographic figure in all of film noir.” His characters usually showed “a combination of bitterness and amusement at a world of duplicity”; they were men “whose great expectations had been defeated by events.”

Other actors who vaulted to prominence in crime films included Robert Ryan, Kirk Douglas, Robert Mitchum, Dan Duryea, Richard Widmark, and Gloria Grahame. A popular noir team was Alan Ladd and Veronica Lake, who costarred in adaptations of Graham Greene’s "This Gun for Hire" (1943), Dashiell Hammett’s "The Glass Key" (1945), and Raymond Chandler’s "The Blue Dahlia" (1946). They had a quality of “flatness” that seemed tailored to speaking the cynical, clipped dialogue of these films. As Foster Hirsch writes, “Their faces barely move. Their dry, tight voices, monotonous in rhythm and intonation lack any music or coloring . . . suggesting, beneath their masks, a weakness and vulnerability that the noir stories require of them, as they get pushed about by bizarre turns of fortune.”

Feminist critics would later celebrate the noir woman — the iconic femme fatale — as a lioness of empowerment and sexual freedom. Janey Place articulates this view when she writes that the noir era “stands as the only period in American film in which women are deadly but sexy, exciting, and strong . . . active, not static symbols . . . intelligent and powerful if destructively so.” The femmes fatales were certainly more than just sexpots; they were apolitical rebels against the traditional female role. Depression babes ambitious for a materially richer life but lacking education or business ambitions, they rejected domesticity (unless they wanted to negotiate a marriage of convenience to a wealthy man) and used their sexual wiles to undermine patriarchal power — to “unman” a man and thus control him.

The rise of the femme fatale in films noir reflected male ambivalence and anxiety about World War II women, those Amazons unleashed by the war who worked at men’s jobs, had sex with whomever they wanted, and rejected home and motherhood. In one of the rare films about a career woman who achieves business success, "Mildred Pierce," Hollywood resorted to a noir plot to sell the postwar message that women belonged in the home, not in the factory—let alone in the boss’s office (except as his loyal secretary).

A new breed of career woman who was different from the highspirited dames of the screwball comedies like Carol Lombard and Rosalind Russell emerged in the films noir in which women were involved at the production end. This was the wartime Amazon, physically as well as psychologically strong. Typical was "Phantom Lady" (1944), based on the Cornell Woolrich novel written before the war. The strong heroine more likely rose from the author’s mother complex than from social realism. Still, the character was in synch with wartime American women. Strikingly filmed by Weimar graduate Robert Siodmak on dark, menacing city streets, "Phantom Lady" was produced by Joan Harrison, who trained as Alfred Hitchcock’s assistant—and thus sympathized with the spunky secretary heroine (Ella Raines) known as Kansas, who follows a trail of possible witnesses through a series of sleazy urban venues trying to find the eponymous woman who can clear her boss, falsely accused of murdering his wife. At one point she flirts with a jazz drummer who knew the mystery woman at the bar. “You like jive?” he propositions her. “You bet, I’m a hep kitten,” she replies, adopting the lingo.

Perhaps the most strongly feminist crime film of the era, well ahead of its time, was "Outrage" (1950). Not only was it directed by a woman, the actress Ida Lupino (known for her tough, hard-bitten women in noirs like "Road House"), but it dealt with the subject of rape. Lupino sensitively explores the problems of a young woman (Mala Powers) after an attack. Her sense of violation and shame cause her to run away from family and fiancé. When a coworker in her new life tries to kiss her, she reacts violently and nearly kills him. Put on trial, she receives counsel from an understanding minister (Tod Andrews), who persuades the court that society has a responsibility to help such victims rather than condemning them.

A typical noir with a poisonous female, "Gilda" (1946) was produced by Virginia Van Upp, the foremost woman movie executive of the postwar years. Like many women in movies and journalism, Van Upp had been given a chance because of the wartime manpower shortage. Gilda (Rita Hayworth) is a femme fatale who flaunts her free sexuality but is tamed in the end. She has a stormy love-hate relationship with Johnny (Glenn Ford), whom she marries after her gangster-gambler husband disappears. Gilda and Johnny reconcile and return to the States for a new life. As he tells her, “Nobody has to apologize because we were both such stinkers.” Such are the tarnished male-female relationships in films noir, where they are either partners in being stinkers or buddies righting a wrong (like Ladd and Lake in "The Blue Dahlia" or Bogart and Bacall in "The Big Sleep").

Other femmes fatales, like Joan Bennett, Jane Greer, Ann Savage and Yvonne De Carlo exhibited varying degrees of destructiveness as they used sexual wiles to manipulate men for material ends. The emergence of this type of woman (different from the usually good-hearted gold diggers of the thirties) was unique to films noir. The femmes fatales reflect male ambivalence toward independent working women, an attitude compounded of their insecurity upon finding themselves back in a competitive civilian world, becoming the provider again, perhaps working for a large corporation. Indeed, the character of the emasculated male was common in films noir.

The archetypal noir femme fatale is the character Kathie Moffat, played by the dark beauty Jane Greer, in "Out of the Past" (1947). Kathie has no work; she is solely after money and will kill for it. She is literally a woman of the darkness. Her lover Jeff (Robert Mitchum) describes their affair in Acapulco: “I never saw her in the daytime. We seemed to live by night. What was left of the day went away like a pack of cigarettes you smoked." In the climax, like the transgressive lovers in "Double Indemnity," they kill each other.

Excerpted with permission from "The Noir Forties: The American People From Victory to Cold War," by Richard Lingeman. Available from Nation Books, a member of The Perseus Books Group. Copyright © 2012.