China up in arms over Newtown coverage 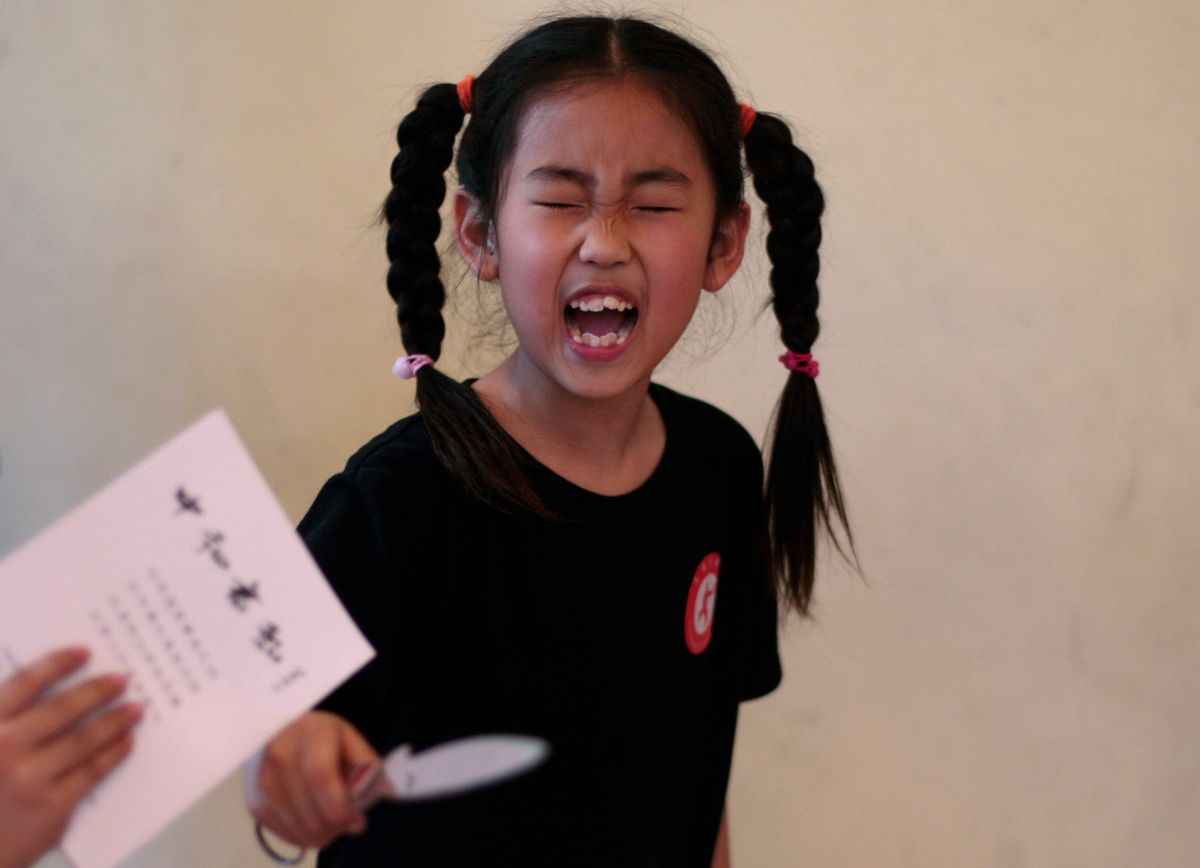 A Chinese School girl, reacts holding a knife during a self defence course at Changzheng Kung-fu School in Beijing, China. (AP/Muhammed Muheisen)
--

HONG KONG — On Dec. 14, the same day that Adam Lanza shot up Sandy Hook Elementary School, there was a rampage at another elementary school in China's central Henan province that left 23 young children bleeding and wounded.

Amid that horror, Chinese netizens gave an outpouring of condolences for Americans affected by the Newtown tragedy. Throughout the weekend, thousands of Chinese shared online images of lit candles and heartfelt expressions of sympathy for the 20 children and seven adults who were killed in Newtown, Conn.

“Today is a sad day for the entire world,” wrote Weibo-user Zheng Yuanjie, one of many who linked the Connecticut attack to China’s own tragedy.

On Monday, the hashtag “Honoring Ordinary Heroes” stayed at or near the top of the most popular topics on Sina Weibo, China’s equivalent of Twitter, with many users praising the teacher Victoria Soto, who died saving her students from the gunman. Little gloating or schadenfreude over America's loss was anywhere to be found.

As in the US, some Chinese pointed to the stark difference in death tolls as an illustration of the differences in gun policies between the two countries. (The Chinese government bans gun ownership outright.)

“They should learn from us and adopt gun control,” wrote one user from the Xicheng district of Beijing.

Yet these arguments were less numerous than people in the US might have guessed. Instead, many netizens in China were pointing out a different contrast: the relative lack of information about China’s own rampage. In fact, many directed their anger at the state-run news agencies for playing up America’s tragedy while ignoring their own.

In the days following both attacks, China’s state-run media focused heavily on America’s tragedy, and provided very little real reporting on the school stabbings in Henan.

Outgoing President Hu Jintao sent his condolences to Obama, but has not made any public statement on the Henan attack. Xinhua news agency published an editorial urging Obama to “make preparation for a protracted war” to pass better gun-safety laws in America. Yet local Chinese news stations, following an apparent prohibition, did not report the names of China’s wounded children — some of whom lost fingers or ears — and have not been able to confirm whether or not the attacker had a mental illness.

(Midday on Monday, Xinhua reported that the man had been "affected by rumors of the upcoming end of the world predicted by ancient prophecy.")

China has suffered a series of attacks against children in the last several years, raising questions about whether those suffering from mental illness are receiving adequate treatment.

Some Chinese critics argue that the public now knows more about Adam Lanza and Sandy Hook elementary than they do about the crime in their own country.

“Yesterday, I watched an entire day’s worth of CCTV4 news. I watched how America is in chaos and an abyss of suffering, with guns spreading unchecked, and had no idea whatsoever about the extremely tragic crime in Henan!,” wrote one user on Weibo, in a translation by ChinaSmack.

“China and the US had campus tragedies at the same time; the relevant organs issued orders prohibiting reportage on the scandal at home. Therefore, with much fanfare, every newspaper and television station began to report on the US massacre, with retrospectives, summaries, analyses, finally saying together in one voice: Look at this evil capitalism!” said Murong Xuecun, a well-known writer, in a translation by Tea Leaf Nation.

Others lamented the lack of public emotional display of the tragedy from China’s leaders.

“Their Obama cried and lowered the flag to half-mast. What about us? The gap, this is the difference between first and second."

Perhaps most surprising of all, while many Americans begin to demand better gun-control laws following several bloody massacres, some Chinese continue to look at US gun rights with envy. They argue that if ordinary Chinese could arm themselves, the government would think twice about appropriating land, or approving projects with destructive effects on their environment.

“The legal right to carry guns is a symbol of American democracy. The tragedy today is but a price for freedom,” wrote one user, in a collection of posts translated by OffBeat China.

In fact, some sentiments sounded as though they would be right at home at an NRA rally.

“So many children were shot. Even God would cry. But that’s probably the price of freedom,” said Wei Hanfeng, an editor at Chinese BusinessWeek.

“From a technical point, it’s OK to discuss how to pass laws that can better control the use of guns, but it’s not OK to take away people’s right to fight for freedom.”