Obama in 2000: "Pervasiveness of guns in this country contributes to violence"

EXCLUSIVE: In a previously unpublished interview, the then-state senator attacked guns and a culture of violence 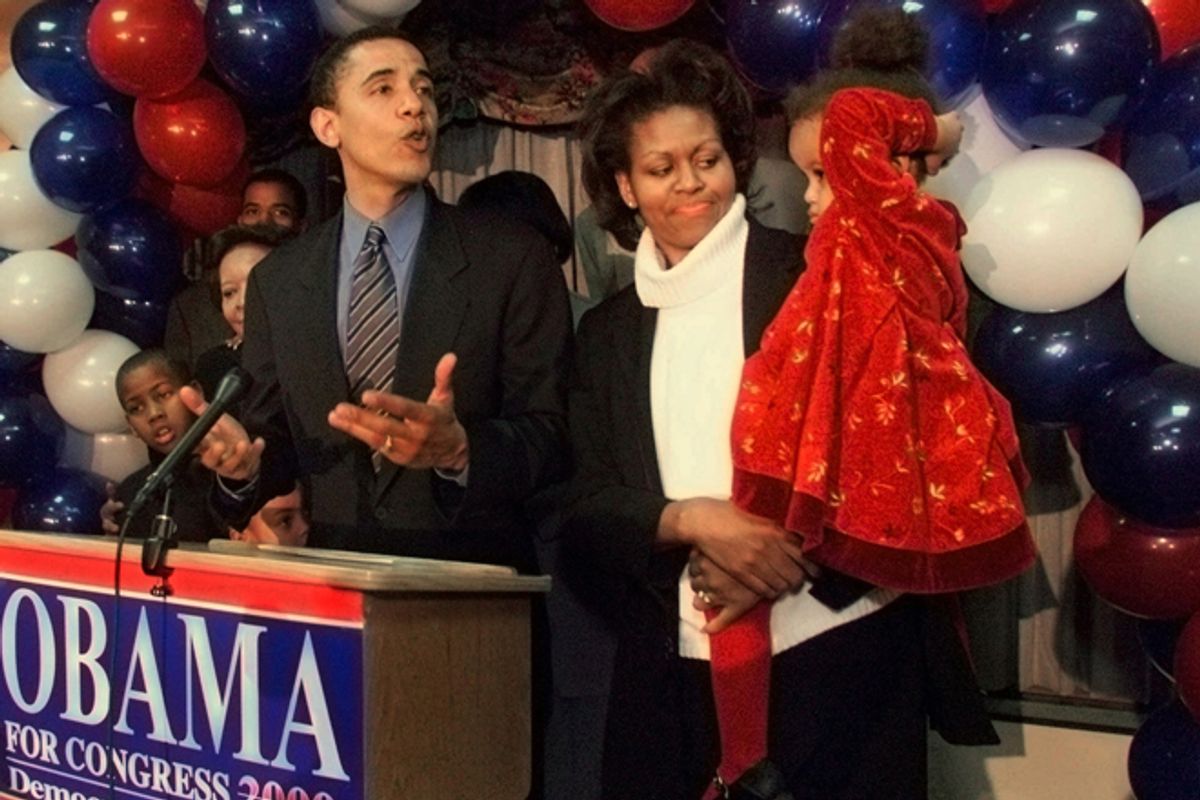 Back in 2000, I found out what Barack Obama really thinks about guns.

Obama was an Illinois state senator, running for Congress in an urban district, so he didn’t have to worry about appealing to rural voters, let alone red states. The most important gun issue he faced was his failure to fly back to Springfield from a Hawaiian vacation to vote on an anti-gun bill, because his then-18-month-old daughter Malia had an ear infection. The Safe Neighborhoods Act -- which Obama supported -- would have made illegal possession of a firearm a felony. It failed by five votes, but a compromise version passed the next year.

A month before the primary -- which he lost to Rep. Bobby Rush -- I interviewed Obama for the Chicago Reader. We mostly talked about the missed vote, which Obama’s opponents were using as an example of his callowness, but then I asked him about his philosophy on gun control. Here is a previously unpublished transcript of those remarks, which did not make the 2000 piece:

We were talking about gun control. People are cynical. They say, “We’ve already got all these laws. What we need to do is change the culture, change people’s hearts.” What can you do as a congressman?

I think that there’s a legitimacy to some of these arguments. And I sort of paraphrase Dr. King. I don’t think it’s an either/or. I think it’s a both/and situation. I think that if you look at the statistics, the murder and violent crime rate in America is so much higher than anywhere else in the industrialized world, and when you look at all the variables that are involved, the biggest single variable that you can attribute this difference to is gun prevention. Non-violent crimes in England are just the same as they are in the United States.

It’s undeniable that the pervasiveness of guns in this country contributes to violence, and if we can eliminate those guns, we’ll never eliminate violence, but it eliminates the most egregious results. Both in my announcement, and at every campaign stop that I make, and I think you saw it at the educators’ event where I was talking about education, I do think that there’s a values component to political leadership. I think we have to talk about values and individual responsibility, and behavior. And that, I think, resonates with the understanding of ordinary people in the 1st Congressional District, or throughout the country. We have young people who are far too tolerant of a violent culture, and who glorify in media and music, more so in, and I’m only 38. I don’t want to sound like a fuddy-duddy. There’s a substantial change in terms of the cultural norms that are presented today compared to what …

I’m not so sure I agree with that, because I watched "High Noon" yesterday. That glorifies a man with a gun.

Sure, and you have James Bond. We grew up with all that stuff. But my sense is that the culture is more pervasive for kids today. When I was growing up -- granted, I grew up for five years in Indonesia, so, you know, I was a little bit removed from it, but you didn’t have cable television, 50 stations, round-the-clock entertainment. I have an 18-month-old daughter, and she knows who Barney is, and Elmo. She knows the characters. I didn’t have all this. So I think that cultural penetration in the minds of our young people is stronger today. I’m not simply making a critical argument that television is causing violence. What I do mean, though, is that there are a range of factors.

I think all of those contribute to sort of a vacuum in the community, and I think young people, particularly those who aren’t benefiting from attentive parents, I think, fill that vacuum, and I think some of that is going to have to be addressed not only by taking guns off the street, but by having high-quality after-school programs, high-quality urban education programs, prevention and intervention programs that get young people back into school, on track, focused on positive activities. Very little is written about just the fact that, again, you talk to my wife or her brother, and they will talk about how when they were growing up, Park District, Little Leagues, community-sponsored dance recitals, there were all these things going on.

I know that part of the theory of why violence has gone down over the last 10 years is the war over [drugs]. And that makes sense to me because part of the solution to the crime problem is, and in this sense I’m old-fashioned, and I assume probably not that different from my competitors on this score. I believe in root causes. If people have jobs, and if young people see a track toward getting a living wage job, then the likelihood of reducing violence of all sorts is increased. I’ve always been convinced, even when it comes to the drug trade, as lucrative as the drug trade is, I’ve argued that, if you go to a corner where there are 10 guys dealing crack, and you tell those 10 kids, listen, right now, I can get you into a program that gives you training, pays a living wage, and will give you a skill, and the potential for advancement and a career, not all 10 of them would sign up, but six or seven of them will.