With reports circulating that Nancy Lanza was a survivalist, questions emerge about the movement 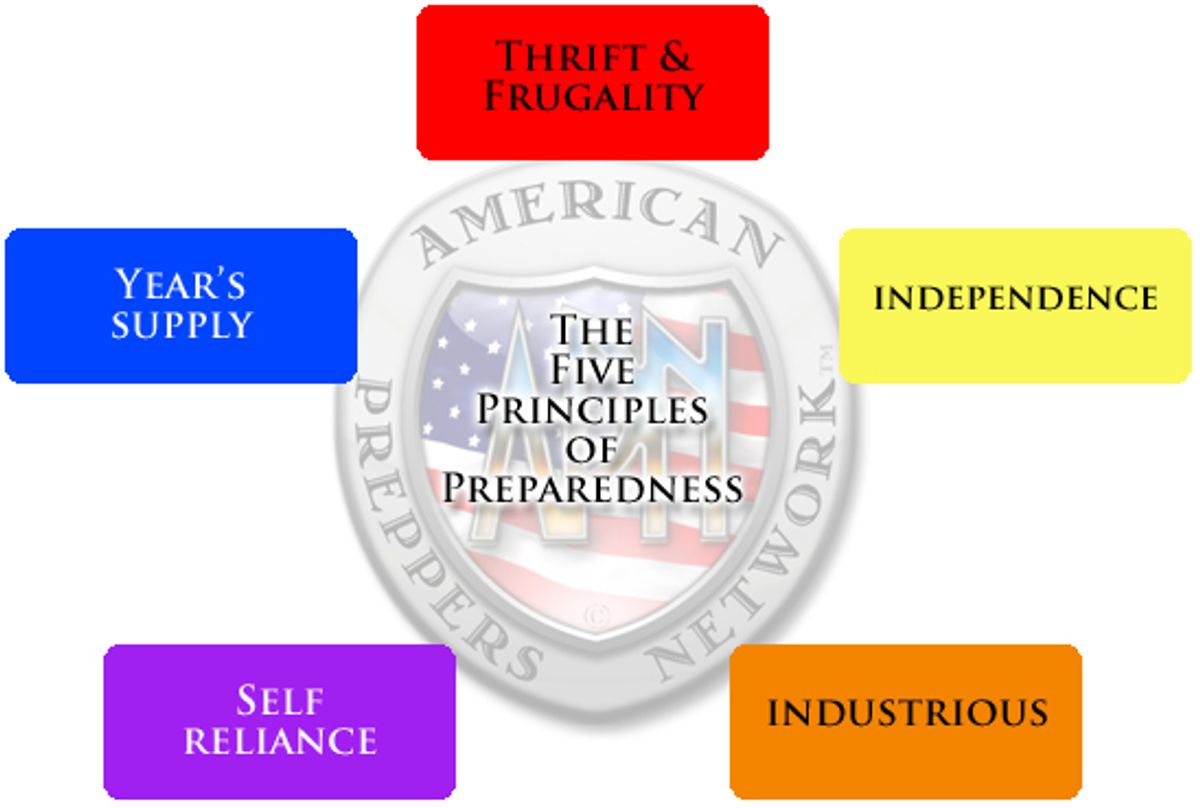 In an interview with local NBC affiliate WHDH 7 in New Hampshire this weekend, Marsha Lanza recalled that the last time she saw her sister Nancy, the conversation turned to disaster preparedness.

“Last time we visited with her in person we talked about prepping and, you know, are you ready for what can happen down the line when the economy collapses."

Since then, subsequent reports have suggested Nancy Lanza — the mother and first victim of Newtown, Conn., shooter Adam Lanza — may have been part of a survivalist movement known as "preppers."  And while it may prove impossible to confirm her affiliation in this loosely organized network of gun enthusiasts, back-to-the-land types and the generically cautious, the tragedy at Sandy Hook has invited increased scrutiny.

According to the American Prepper Network (APN) website, preppers take "personal responsibility and self reliance seriously."  They follow the Five Principles of Preparedness, a fairly innocuous edict preaching self-reliance, thrift and keeping at least a year's supply of "every needful thing" at the ready. But they aren't just preparing for Cormac McCarthy-style end times; the APN considers short-term economic instability just as dangerous a threat.

Preppers focus much more on being prepared for things that will more likely be an issue – such as the family bread-winner losing their job, passing away or being incapacitated.  Other primary concerns for Preppers are: death or serious illness/injury to a family member, all-consuming house fire, flooding or other natural and man-made disasters.

The APN website rejects the "doomsday" label outright, suggesting they are simply being cautious and promoting what they see as the deeply American virtue of independence above all else. They were also quick to respond after news of a possible link to their movement emerged out of Newtown.

Our members, and others around the globe who share our philosophy of being prepared in times of emergency, are sickened by this event.  We too are fathers, mothers, brothers, sisters, sons and daughters and to associate APN or any legitimate organization that stresses preparing for emergencies with this barbaric act goes against everything we collectively stand for.

Statements aside, preppers undoubtedly attract a fringe element. The APN site talks often and explicitly about "The End of the World As We Know It," which it refer to as TEOTWAWKI. And judging from the abundance of videos and blogs of self-identified preppers arming themselves while touting conspiracies about government, financial collapse and the apocalypse, it's clear this isn't strictly a peaceful movement of people hoarding canned goods.

Preppers don't just stockpile nonperishables -- they collect weapons. Like Nancy Lanza, who owned five guns -- three of which were used in the Sandy Hook massacre -- preppers believe having weapons is just as important as having enough water. They are also deeply suspicious of government overreach, sounding Tea Party-like in this statement on Christianity and the Constitution.

It is difficult to say what, if any, role Nancy Lanza's worldview played in her son's murderous rampage last Friday. But as a public portrait of this fractured movement emerges, it's fair to wonder if a culture increasingly equating safety and self-reliance with self-arming will see more of this kind of tragedy.