Is she a victim, or do her guns make her an accomplice? In the end, her attempts to cope with fear unraveled her 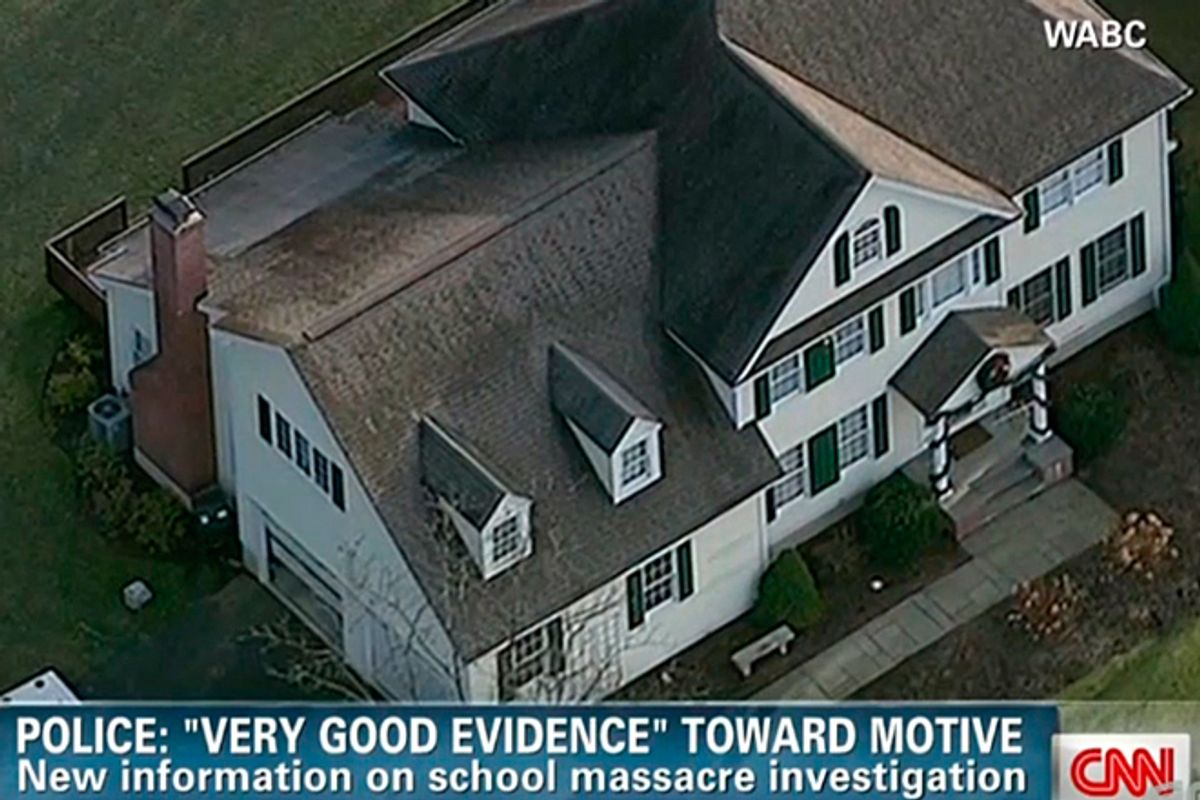 In a tragedy like Sandy Hook, grief comes at us from all directions. First it was the children. First graders make us smile and feel uncomplicated joy at being alive. As parents, we can feel the stabbing pain of newly bereaved Newtown mothers and fathers, but we don't have to be parents to feel that loss.

Then Victoria Soto's memorial overwhelmed me. Two of my daughter's best friends are elementary school teachers; I felt their bravery and vulnerability in a whole new way. On Monday a CNN interview with principal Dawn Hochsprung's teary, 20-something daughter Erica, begging her mother to "come back, just come back" undid me, making me miss my own mother and think about my daughter someday missing me. All of us have multiple identities that let pain find us in many different ways.

The only person I haven't been able to think about is Nancy Lanza, the first victim, shot in her bed with her own gun by her own son, the terminally mentally ill Adam. I shrink from the story despite the fact -- or because of it -- that we had things in common. She was close to my age, divorced, with children in their 20s. But I've been blessed; my daughter is as much a joy today as she was as a first grader.

Isolated in life, Lanza seems equally so in death. An anonymous benefactor donated 26 Christmas trees to a Sandy Hook memorial, even though 27 people died.

Consider this a meditation on the idea of Nancy Lanza, not a story about Lanza herself, because we know so little about her. Maybe that's because we'd rather not know. A blog post titled "I am Adam Lanza's mother" went viral, but it wasn't about his actual mother; it was the story of another mother sharing her own awful struggle with a deeply troubled son. It obscured Lanza rather than illuminating her, at least for now.

We're not even entirely sure: Is Nancy Lanza merely another victim? Or is she somehow also an accomplice, since we know that her guns killed 26 other people that awful day. Was she a careful gun owner? Did she energetically seek help for her (by most accounts) emotionally disturbed son? Did she really take him to a shooting range?

We don't know the answers to any of those questions. We seem to reliably know four things about her right now (I have to say "seem to reliably," because the facts of this story have changed so dramatically ever since it unfolded, and details about Lanza have been particularly scarce):

She was divorced in midlife, or what should have been midlife.

She home-schooled Adam, for a time.

She frequented a bar called My Place.

Let's stop there. Is there anything more American (in the bad sense) than a bar, a place where we seek company, called My Place? Why not "Our Place"? I mean, if you really want to drink at My Place, you can drink at home. But what a clever name: It lets us live in the fiction that we can each have our own special private place, we don't have to share it, as we enjoy the company of others who are likewise in their own special private place! Parallel play, isn't that what they call it? On some level, too many of us are wounded, arrested preschoolers.

(A digression: Someone close to me drank away his late 40s in a bar unironically called the Sand Trap. It was near a golf course; he didn't play golf. Are we paying attention, people?)

The little bit that we think we know about Lanza comes, sadly, from her My Place friends. A landscaper she met there was for a while the only source of the story that she took Adam to shooting ranges, but Monday a Bureau of Alcohol, Tobacco and Firearms spokesperson confirmed it to NBC News. We don't know whether she drank to excess at My Place, we just know she shared stories of her life over "craft beers." A My Place buddy told the New York Daily News that she recently confided things had gotten worse with her son; she said she thought she was "losing him." But the friend got a cellphone call, and Lanza never finished the story. (Hint: Real friends don't answer their cellphones when you're confiding that you think you're "losing" your deeply troubled child.)

We see Lanza in photos, laughing, a pretty face framed by nicely highlighted hair. She lived alone with her son – which sounds like it was worse than living alone, even before he murdered her. Her former sister-in-law says she took Adam out of Newtown High School at some point to home-school him. Weirdly, for at least 24 hours, she was thought to have been a teacher at Sandy Hook. Adam Lanza was first reported to have killed her as well as her students. On some level, maybe he did.

Lanza may also have been a survivalist, according to that ex-sister-in-law, who says she was storing food and water, not just guns, in fear of a coming economic collapse -- even though she lived in a mansion and received more than a quarter of a million dollars in alimony annually. "She prepared for the worst," Marsha Lanza told reporters. "Last time we visited her in person, we talked about prepping -- are you ready for what could happen down the line, when the economy collapses?"

The sister-in-law says she and Nancy remained close after the divorce, although she hadn't seen her since June. Lanza's brother in New Hampshire, a retired police officer, told co-workers he hadn't seen his nephew Adam in eight years.

So far no one has come forward to attest to a close, ongoing relationship with Nancy Lanza – not a sibling, a girlfriend, an ex-boyfriend, a co-worker. Her ex-husband's public statement on the murders was understandably and yet somehow lamentably silent about her life, and her death. Four of her friends got together with CNN and NBC reporters to counter an emerging picture of Lanza as an unbalanced, gun-toting survivalist late Monday. She enjoyed guns, but she wasn't "a survivalist wacko," one of them told CNN. Another described her as "careful and responsible." But none of their stories evinced genuine intimacy or frequent contact. The owners of My Place, who sound like they genuinely cared about her, say they will memorialize her with a bronze plaque bearing her name on a bar stool.

In a culture where mothers are to blame for everything, many of us have an understandable reluctance to blame Lanza, regardless of whether her guns were used to murder 27 people, including herself. We know too few details to judge her, anyway: She may be the ultimate monster; she may be the ultimate victim. No doubt she's somewhere in between, and we'll never know the full story, anyway.

Still, from what little we do know, her story seems a cautionary tale about the way fear, unchecked, can unravel us. The things that scared and lonely people do to protect themselves so often do just the opposite. Feeling scared and powerless, she sought power and protection through guns, but they killed her. She tried to help her son by removing him from help, at least the help potentially provided by a school, home schooling him instead, making herself solely responsible. "Prepping" for a future global apocalypse, she did nothing to stop the menace within her own home. Isolated, she sought company, and maybe numbness, at a bar called My Place.

In the wake of these mass shootings, which are almost always committed by disturbed young men, it's common to talk about the isolates, the people, particularly young boys and men, who've somehow come loose from their moorings, from their families, from society, from the rest of us. But I wonder how many isolates are like Nancy Lanza, alone in late middle age, unable to connect, to get genuine help or solace from others.

To speculate about the private pain of a Nancy Lanza – and again, I'm mostly speculating here -- isn't to absolve the larger society from its role in this tragedy. We need more and better gun laws; we need more and better mental health resources. In a way, our collective failure to demand those things reflects the same destructive impulses that may have doomed Lanza: We think we can do it alone. We are each responsible for ourselves. We don't need anyone's help.

Newtown itself reflects the unresolved tensions at the heart of the American experiment: A warm, caring community that also turns out to be home to a lot of people who put gun rights ahead of all else. The fact that so many Americans equate guns with freedom, as well as control, is both a symptom and a cause of what killed Nancy Lanza. In the sketchy accounts we have so far, she comes across as lonely and isolated, and making choices that only left her more alone. We have to hope she was sleeping when her son shot her, because it was already too late to wake her up.