It drove the right nuts when Ted Kennedy called out the racism and sexism in his legal views. But Kennedy was right 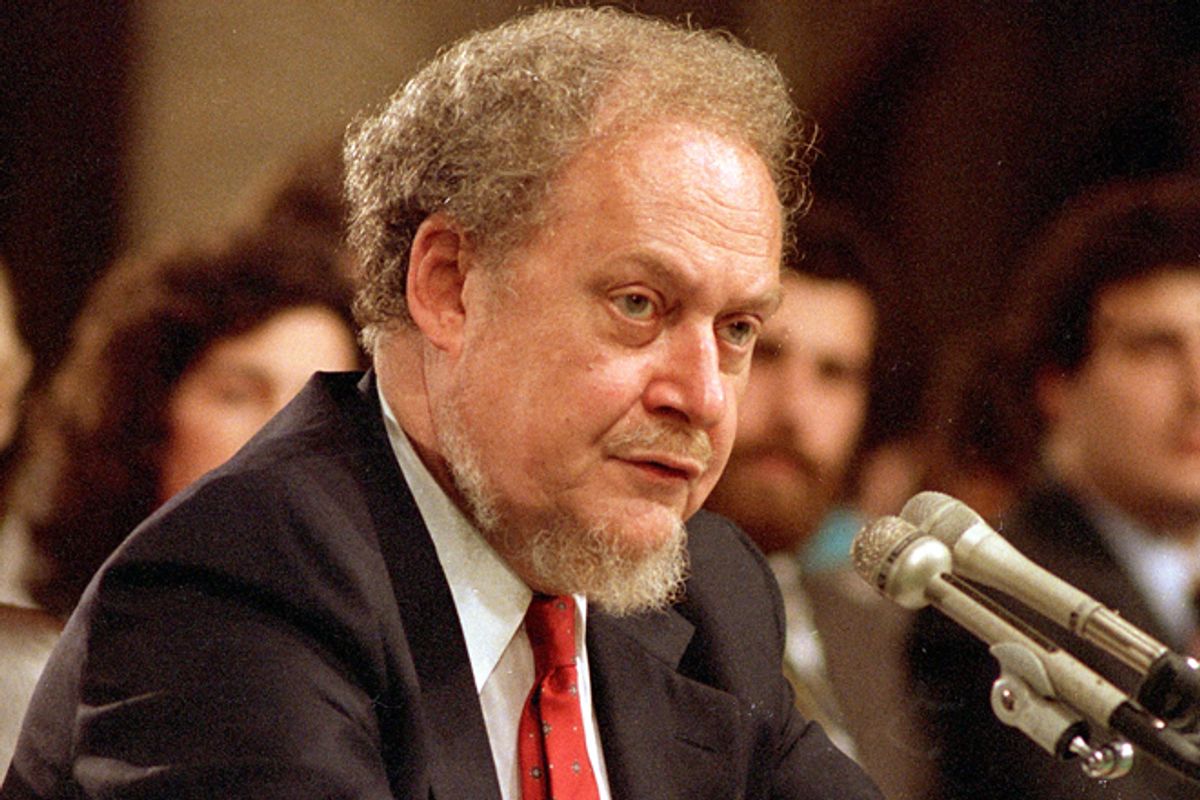 Twenty-five years ago Ronald Reagan tried and failed to put Robert Bork on the Supreme Court. Movement conservatives reacted with remarkably durable outrage to this political defeat. To them, of course, this wasn’t a political defeat at all, but a fundamentally illegitimate “politicization” of the nomination process, enabled by supposed slanders aimed at one of the nation’s most distinguished legal scholars.

Bork had become accidentally like a martyr, and he cashed in, quite literally, on his supposed victim status, writing a couple of best-selling books decrying the moral degeneracy of contemporary America, and living large on what has been referred to indelicately as wingnut welfare.

This narrative was always a bunch of nonsense, and although de mortuis nil nisi bonum is a maxim of our profession, the memory of the deceased will not be spared here.

Bork’s nomination was defeated because over the course of his career he supported a number of legal positions that became, over time, extremely unpopular with the American public as a whole. For example, he defended the idea that states should be free to enforce Jim Crow laws, and opposed the Civil Rights Act of 1964 on the grounds that using federal law to dismantle the apartheid legal code of the post-Reconstruction South was both unconstitutional and morally wrong.

Unfortunately for him, by 1987 the idea that it was OK to use state violence to remove black people from segregated lunch counters wasn’t the kind of idea that was still acceptable in polite company.

Similarly, Bork’s view that a state ought to be free to criminalize the purchase of contraception by married couples was by that point in American history considered, to use a legal term of art, kind of wacky.

To the American right wing, of course, pointing out that Bork had argued vigorously for legal outcomes that most Americans now found repugnant in the extreme was nothing less than a smear campaign. Bork, after all, was merely putting forth his “principled” view of what results should flow from a proper interpretation of the Constitution.

In particular, Sen. Ted Kennedy’s remark that “in Robert Bork’s America there is no room at the inn for blacks and no place in the Constitution for women” sent and still sends conservatives into paroxysm of fury. How dare someone like Kennedy besmirch the reputation of this brilliant legal scholar with such crude characterizations?

All this whining somewhat successfully obscured the fact that Kennedy’s statement, while not as nuanced as the kind of objection that might be lodged in a Yale Law School seminar, was largely accurate. Bork did oppose federal anti-segregation laws, and he didn’t believe that women should be considered a protected class under the equal protection clause of the 14th Amendment. (A year ago Bork put forth the remarkable view that, beyond any technical legal objections to interpreting the amendment in this way, doing so was no longer necessary in any case because women “aren’t discriminated against anymore”).

Bork’s nomination was rejected because a group of politicians, entrusted by the Constitution with the task of making a political decision (that, after all, is the kind of decision that politicians are supposed to make), decided that Bork’s views on a wide range of subjects were – thankfully -- no longer politically acceptable in contemporary America.

That is exactly how the judicial nomination process is supposed to work, and the fact that it worked so well in Bork’s case is something to celebrate. That conservatives have been throwing a 25-year temper tantrum about this merely illustrates their unwillingness to face up to the fact that their core beliefs about how judges should interpret the Constitution were and continue to be rejected by the American people.