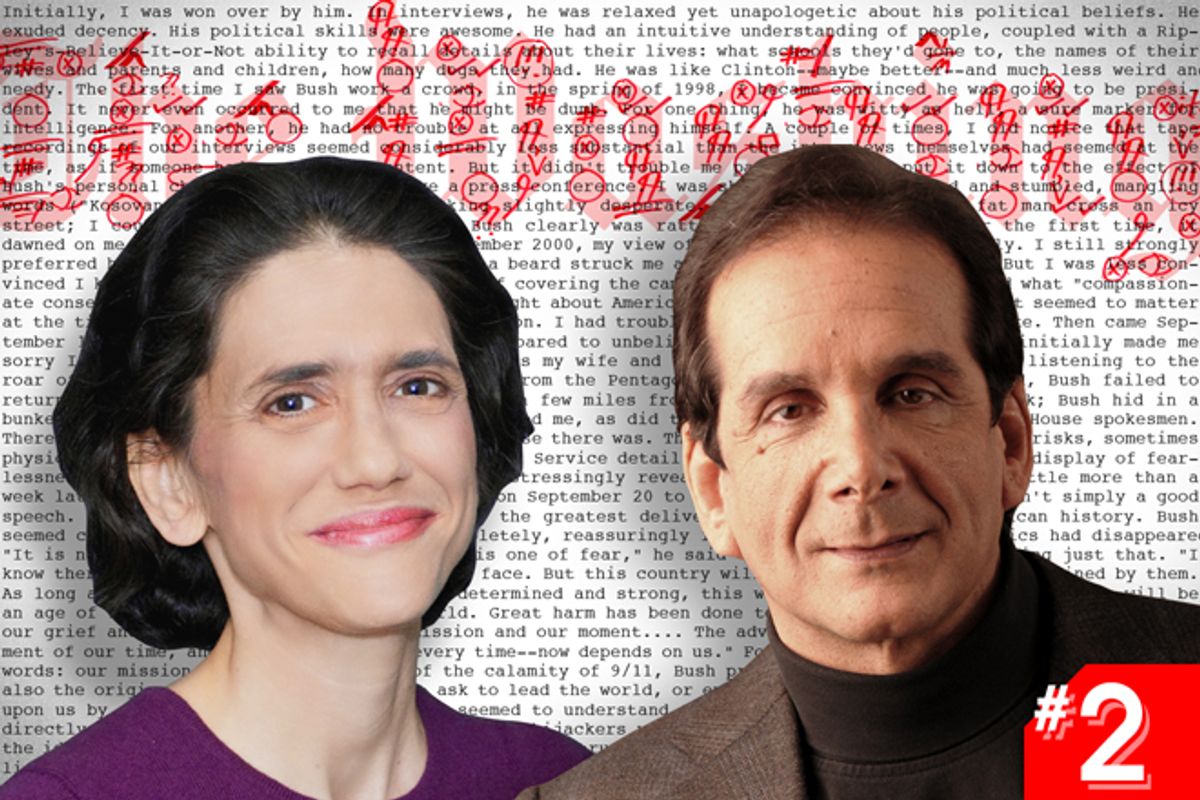 The Washington Post is the hometown paper of the city that everyone in America hates, usually for good reason. And the things Americans hate about that city and the people who work there are reflected in its pages.

The newspaper itself is an ever smaller and more starved-looking thing. The people running it used to actually compete with the New York Times, for readers and writers and national influence. Now they can't really decide if they even want to try.

The Post can't decide if it's local or national, with editors and publishers offering a series of conflicting and contradictory statements of intent over the last decade. The paper closed its major national bureaus a few years ago, but it also fails to extensively cover local news. What it seems to think it should be is a newspaper dedicated to covering politics and the federal government. D.C. already has three or four of those, which would seem to suffice, but politics is the paper's brand, and what brings national traffic to the website.

The Washington Post has the worst opinion section of any major newspaper in the country. It's actually baffling to me how bad it is. It doesn't seem that difficult to simply not publish a bunch of liars, hacks and incredibly boring old men, but the Post can't seem to figure it out.

And they have a million opinion writers. Wheezy old Richard Cohen. Torture enthusiast Marc Thiessen. Mustachioed supply-sider relic Robert Samuelson, George Will. I give them credit for publishing Harold Meyerson, but even that seems like an example of their devotion to being perceived as balanced -- we'll employ an avowed socialist, and also a couple of Republican hack speechwriters who love waterboarding.

There can't be more than a handful of people out there who care what most of these people think about anything. Take someone as completely ignorable as Charles Lane. Lane styles himself a "nonpartisan pundit." He's a conservative, of course, but the sort who thinks himself an independent moderate. He fusses about the deficit and thinks the welfare state unsustainable, regardless of actual data, like so many other Beltway hacks. He hoped the 2012 election results would give Nate Silver "a comeuppance." He bemoans polarizations and says America needs "a different kind of politics" "in the tradition of the sectional Great Compromises of pre-Civil War America."

I'm sure if anyone ever read Charles Lane they would have taken some issue with that particular column, because "the Great Compromises of pre-Civil War America" were all designed solely to sustain slavery as an institution as long as possible, but no one noticed because no one reads Charles Lane. Why would anyone? He's indistinguishable from a zillion other sober, moderate pundits. The only time anyone has paid any attention to Charles Lane in recent memory is when he wrote something particularly vile about Gabrielle Giffords and labor unions.

The Post also publishes George Will and Charles Krauthammer, two of the most respected conservative columnists in the nation. The two helpfully show precisely how intellectually bankrupt the conservative movement has become.

When George Will isn't being dishonest, he's usually being wrong. He lies about climate change. He claims that anti-voter suppression efforts are actually about mandatory voting, something few liberals and no elected Democratic leaders support. George Will decided that college football is "liberal" because he doesn't like football and he doesn't like liberal things, so things he doesn't like must be liberal. George Will said that if Obama won it would be because he was lucky enough to be black, and Americans didn't want to look racist by voting against him. That was another entry in his long history of worrying that America was being too nice to black people. Will also predicted Romney would win 321 electoral votes and that Minnesota's marriage amendment would swing the state Republican.

Krauthammer might be even more influential than Will. I have always found Krauthammer's popularity and influence slightly baffling, because he seems precisely as hackish as every other partisan Republican pundit. I guess it's a matter of degrees: While Will predicted a Romney landslide, Krauthammer predicted that Romney would win a squeaker. But Krauthammer still spent the election (and the preceding four years) nattering about Obama's imaginary "apology tour" and pretending the return of the borrowed Churchill bust was a "snub" to Great Britain and claiming that Romney handily and clearly won all three debates and pretending Obama is a far-left radical who is putting America on the road to "European-style social democracy" -- this is exactly the same bullshit as Rush and Dinesh D'Souza.

Krauthammer's columns on the "fiscal cliff" negotiations have been hysterical, in all senses of the word. He complains bitterly that Obama has never been serious about reducing the debt and then calls on Republicans to demand the extension of all the Bush tax cuts, which is idiotic both politically and mathematically. That conservatives take him seriously explains so much about our current politics.

But Krauthammer is at least a mostly consistent conservative who seems to believe what he writes. You can't say that of the Post's star conservative blogger, Jennifer Rubin. During the campaign, Rubin's blog was filed from an alternate universe where Romney's every move was canny and brilliant and Obama was terrified and panicking every day. She turned Bill Clinton calling Romney a liar into an imaginary secret endorsement of Mitt Romney. Then, after the election, she revealed that she knew all along that the Romney campaign was poorly organized and full of incompetents. She effectively admitted to shilling for Romney, and writing things she knew to be inaccurate, in her role as ostensibly an independent conservative commentator. It should've been hugely embarrassing for the Post, and Fred Hiatt, the man who hired her. No one seems to care.

The Post opinion section exemplifies the most aggravating feature of the American punditocracy: that there are simply never any professional consequences for being constantly wrong or dishonest.