The Maya apocalypse is not nigh

Don't quit your day job. The Mayans didn't predict that the world would end tomorrow 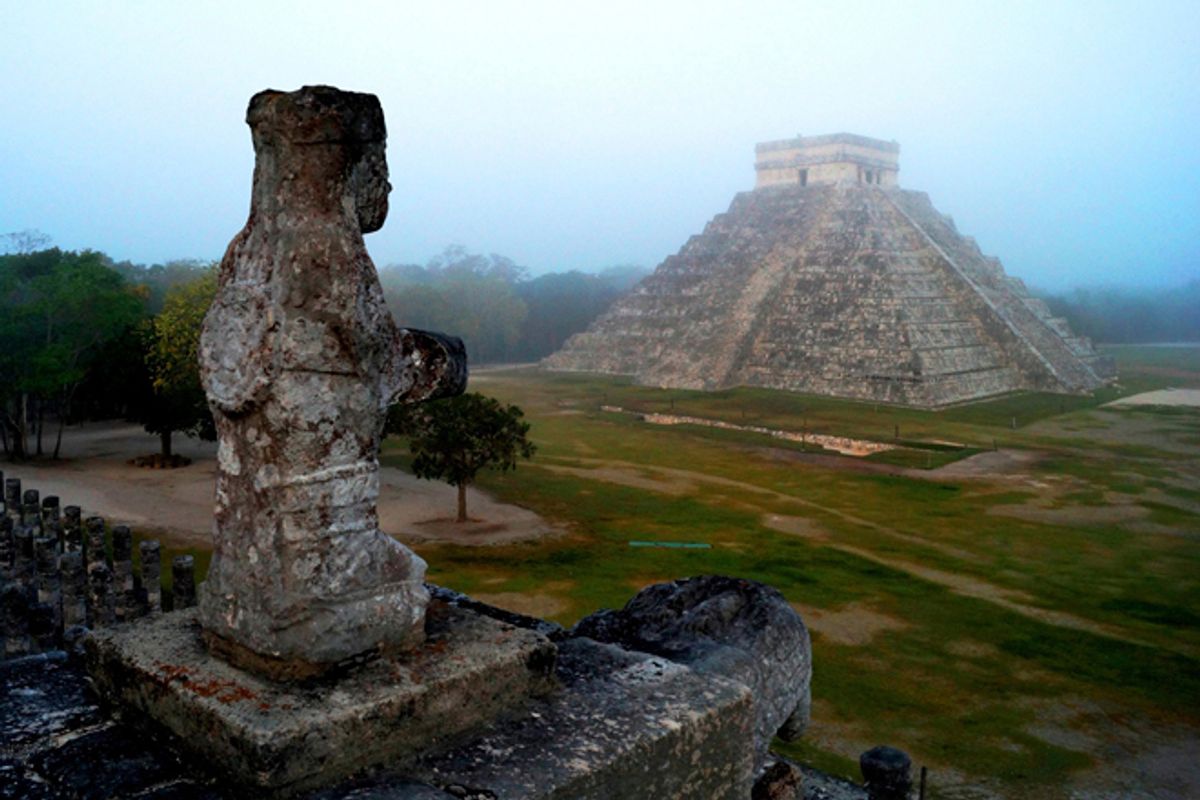 Earlier this year Reuters reported that 10 percent of people believe the Maya 2012 phenomenon could signal the end of the world. Speculation surrounding the advent of the apocalypse has gained enough currency that a cranky NASA astrobiologist taped a video explaining that tomorrow will not be  doomsday. What’s going on?

Tomorrow is the date 13.0.0.0.0 in the Maya’s (the generally accepted anthropological term) “long count” calendar. Remember the hoopla attending Y2K? This milestone is “almost exactly analogous to the end of the millennium for us,” according to Todd Little-Siebold, a professor of history and Latin American studies at the College of the Atlantic. But tomorrow is when the Maya’s cyclical calendar resets after a period of more than 5,125 years, or 13 Baktuns (a Baktun lasts approximately 394 years). While it's clearly not something that happens every day, it doesn't quite explain why a calendar that had disappeared before the Spanish invasion continues to captivate, especially since, as Little-Siebold put it, “There’s not a lot of evidence that the Maya believed [the world] would come to an end” in 2012.

There is evidence, however, that the Maya contemplated our distant date. Two stone markers from the seventh century and found in Mexico’s Tabasco state bear similar inscriptions that a tourism website massages as “At the end of the thirteenth B’ak’tun, which coincides with the date of December 21, 2012, a god will descend from heaven, known as Bolon Yokte’ K’u, or 'Lord of Light.'”

That’s the Maya prophecy you might have heard of. And like a lot of prophecies, it is open to interpretation. Sitler devotes much of his admirably dyspeptic article to the parade of figures who have turned speculation about 2012 into “a technology-fed farce manipulated by self-interested New Age charlatans.”

Sitler finds the first reference to the 2012 phenomenon in modern scholarship in a 1951 footnote: The end of the 13th Baktun would be “an occasion of the highest expectation,” a Vassar astronomy professor wrote. 2012 continued to lay dormant until 1966 when another academic upped the ante, suggesting the possibility that "Armageddon would overtake the degenerate peoples of the world and all creation on the final day of the thirteenth bak’tun.”

Eventually the phenomenon snowballed, and Sitler says more than 1,900 books have been written about this portentous date. This includes a number of New Age thinkers and prophets who found in 2012 the potential to birth, well, a new age. (Whatever one’s feelings about the academic and new age communities, in writing about 2012, both camps have developed a symbiotic relationship, interpreting each other’s findings in their own jargon for their own ends. It’s sort of like the ongoing feud between the progressive and conservative media.)

One of the most notable new age writers was José Argüelles, a Princeton and University of Chicago trained mystic, artist and activist (he was among the originators of Earth Day) who wrote a 1987 book called “The Mayan Factor: Path beyond technology.” In this “intriguing and barely comprehensible” work Sitler says Argüelles “prophesied a coming era of enhanced human consciousness, a 'coming solar age' coinciding with 21 December 2012, for those who turned away from materialistic progress rooted in science and embraced his utopian vision."

Argüelles is probably best know for organizing a two-day “global peace meditation” in 1987 called the Harmonic Convergence during which, according to LawofTime.org, he "also awakened the mass consciousness to the significance of the year 2012 and turned the world’s attention toward the Maya and their calendric system.”  As if that wasn't enough, in 1989, he devised the Law of Time:

Modern humanity is in crisis because it is immersed in an erroneous and artificial perception of time, causing civilization to deviate at an accelerated rate from the natural order of the universe. To remedy this self-destructive situation, a collective unification into galactic consciousness is required. For this reason, José Argüelles promoted the return to a natural timing cycle through the regular measure of the 13-Moon 28-day calendar. Knowing that the Maya used up to 17 calendars simultaneously, and after experimenting living many cycles at once, Argüelles found that the 13-Moon 28-day cycle was more than a calendar, but a master synchronization matrix that all other systems and counts could be synchronized by. For this reason he called it a synchronomoter, a tool for measuring synchronicity.

Argüelles sloughed off this mortal coil last year, missing the opportunity to experience 2012, at least not in conventional form.

Before Hollywood discovered “2012” and interpreted this ancient curiosity with its usual subtlety,  a few more writers helped plant the concept in the collective consciousness. Among them, Sitler mentions a Swedish toxicologist named Carl Johan Calleman who became popular in certain circles espousing the belief that the "Long Count is no mere calendar but a description of transformed human consciousness arising through a progression of nine temporally defined 'underworlds' that supposedly culminated with an enlightened humanity on 28 October 2011." On this day Calleman suggested the Mayan calendar would end. His work has “no support from serious researchers,” Sitler wrote, and has gone out of fashion since his prediction proved untrue.

The alignment of the solstice sun with the Crossroads/dark rift (of the Milky Way), and this period-ending scenario was conceived as signaling the need for a deity sacrifice to ensure world renewal.

The Maya did have a sophisticated astronomy. But scholars of it such as a Colgate University professor named Anthony Aveni, who pioneered of the field of archaeoastronomy -- which, very roughly, studies how past civilizations interpreted the sky -- helped give rise to thinkers like Jenkins. Aveni has denounced him. (Aveni declined to comment for this article.) Sitler finds that Jenkins is widely reviled by credible researchers but is also enjoying a bit of a reconsideration. Your feelings about academia may influence how you interpret that.

At the same time, the 2012 phenomenon has had real-world consequences. Little-Siebold of College of the Atlantic, said there has been an effort in the Maya region of southern Mexico and Central America to capitalize on 2012 besotted tourists. He added that during Guatemala’s long civil war there was a resurgence of interest in the Maya, in part because it was safer to organize around “cultural” topics like the ancients than “political” issues of the present. A renewal of interest in Maya civilization got another boost in 1992, the 500th anniversary of Columbus’ arrival in the new world.

Amid this resurgence, Sitler notes the “pizza effect,” by which Maya spiritual leaders have reincorporated some of the new international theories about the Maya into their own beliefs. On Saturday, assuming we’re still here, we can look forward to a new era of interpretation.