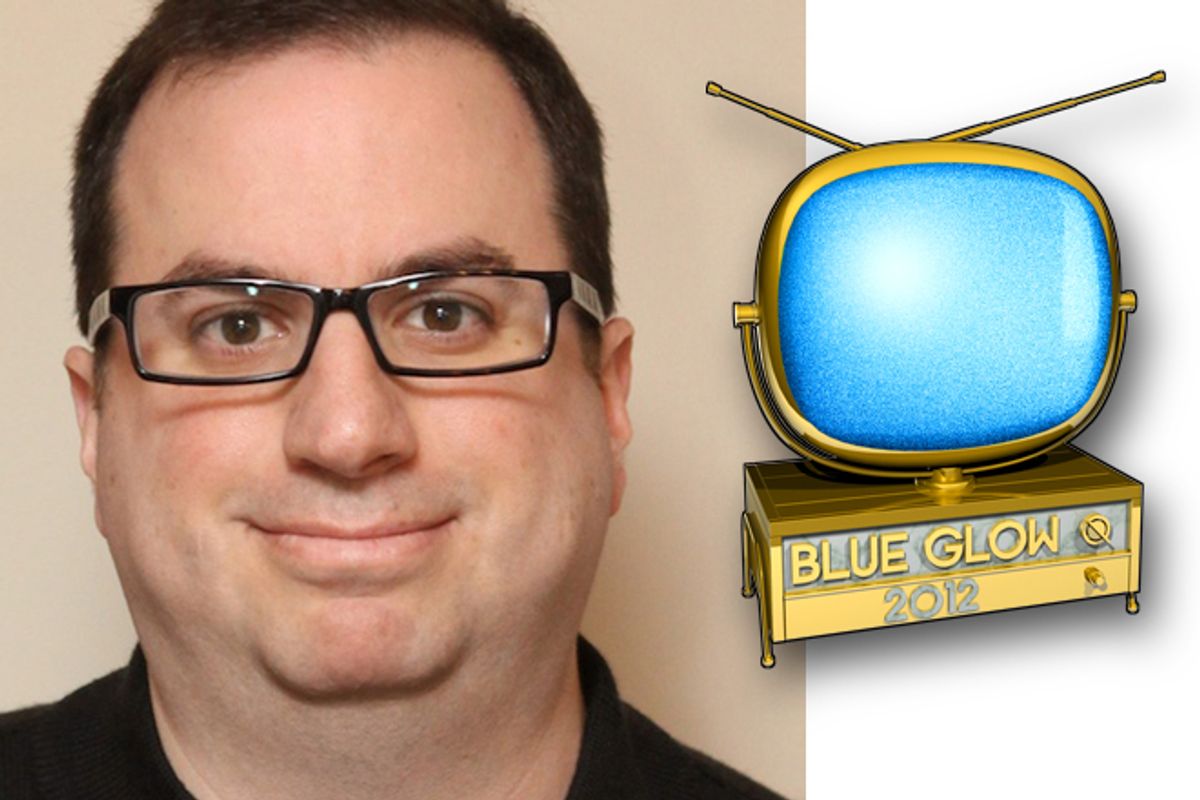 Alan Sepinwall is the senior editor (television) at HitFix and the TV columnist at the Star-Ledger of NJ. He is the author of  "The Revolution Was Televised."

1. What was the show of the year? "Mad Men" came back from a long break with an ambitious, dark, messy and incredibly satisfying season. I didn't love every single decision (I think they needed to spend more time/effort on building up to Joan's decision, for instance), but watching the show every week felt, to borrow an old line from Ken Cosgrove, like looking into something very deep; you could fall in.

2. What was the best scene? There's a sequence in the fourth episode of "Luck" that I must have watched a dozen times before that show debuted, and many more times since the unfortunate events that led to its cancellation. It's the first time that Walter Smith's horse Gettin' Up Morning is in a competitive race, and the individual beats of the plot — rookie jockey screws up initially, falls way behind, then mounts an amazing comeback to win by several lengths — couldn't be more familiar. But the execution of it — the way the sequence is shot and edited, and the performances of every actor playing someone watching this incredible athletic feat and being reminded of why they come to this track day after day after day — is special. David Milch shows are famous for their language, but this is a largely wordless sequence, and it's thrilling and moving and everything that the show wanted to be for its brief time in existence.

3. Best performance of the year? What Amy Poehler does, week in and week out, on "Parks and Recreation" is just amazing to me. Anything they need her to do, she does. Be insane (and insanely funny)? Easy. Be the perfect straight woman? On it. Make me cry like she's a character on "Parenthood"? Done. It's not just that she can do so many things, but that she's so great at all of them. It would be a waste of half her skill set, but I could imagine a universe where she transitions into a "Lou Grant"-style "Parks and Rec" spinoff drama where Leslie gets a very low-level position in Washington; she could absolutely carry that.

4. What was the funniest joke or line? I may be exaggerating, but only slightly, when I suggest that the foundation of my marriage was threatened by the length of time I kept the "30 Rock" live episode on our DVR, just so I could keep rewatching the "Alfie & Abner" sketch over and over and over again. It's not just that Jon Hamm is an incredibly good sport to put on blackface and do the "Zippity-do-do!" dance, but that the sketch is so perfectly constructed with Tracy Morgan as the dignified foil ("I was a Tuskegee Airman!") pointing out just how offensive Hamm's minstrel show was; the part I laugh hardest at, every single time, isn't any of Hamm's antics, but the murderous look on Morgan's face as the two actors stare each other down before Hamm optimistically blurts out, "Banjo!"

(If we're allowed to mention runners-up, I gave very strong consideration both to Andy Dwyer recounting the plot of "Roadhouse" and Nick Miller giving Schmidt a cookie.)

5. Which series best evoked life in 2012? This election year, was it the wealth of political comedies and dramas, or the postapocalyptic fantasy shows — or something entirely different — that best captured what we were feeling this year?

[I honestly don't have a good answer to this. I don't look at TV in this way, by and large. If you need an answer from me, I can try to pull something out of thin air, but that's all that it would be.]

6. And personality of the year goes to … At the end of every night, after I've taken notes on all of the scripted shows I keep up with, made sure that bills and other household issues are taken care of and the kids are still sleeping safely, I sit down with my wife and we watch "The Daily Show." And for a half-hour (or, at least, until the interview begins), Jon Stewart takes all the things happening in the world that fill me with rage or despair and instead gives me license to laugh at them.