Pitting "the next America" vs. white seniors is divisive and dangerous 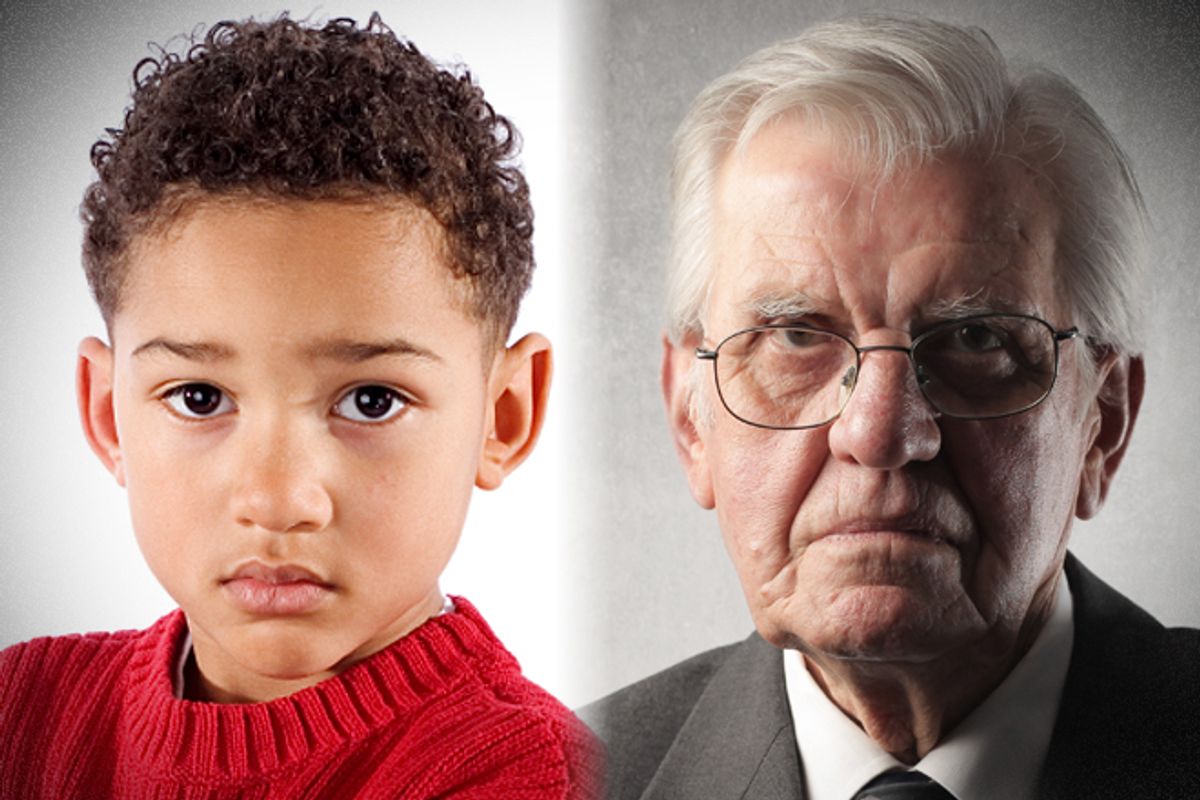 Ronald Brownstein's latest National Journal story describes a hidden and fascinating fault line in the "fiscal cliff" debate: not between Democrats and Republicans but "between the Brown and the Gray." Brownstein is one of the best mainstream reporters covering the politics of American demographic change, and he lays out a tough truth: The lion's share of public resources today are going to seniors, 80 percent of whom are white, while a shrinking proportion goes to young people, a majority of whom are now black, Latino and Asian. Thus the way we solve the fiscal cliff crisis – by depicting it as a crisis, Brownstein displays a bias toward an establishment narrative that favors Republicans, but otherwise, the piece is fairly neutral – has racial as well as political and generational implications.

Brownstein is identifying a fault line, not creating it, let alone endorsing it. He raises points that are well worth discussing. But I wince at such a catchy depiction of polarization – even though Brownstein is right about the way particularly wealthy white seniors have gobbled up resources for themselves while denying them to others.

Yet to date, efforts to rile young people into believing there's an "entitlement crisis" caused by greedy geezers have been backed and funded by the super-rich – most notably hedge-fund plutocrat Pete Peterson -- on behalf of deficit-cutting and safety-net-privatizing ideas that would hurt everyone except the top 1 percent. Adding race to that stark "us vs. them" narrative could make it even more toxic.

I'm sure that's not Brownstein's intention. He lays out the tragic political history of the last 40 years very well (irresistible self-promotion: I wrote this about extensively in my book):

[T]he baby boom has lived a charmed life. It benefited from expanding public investment when it was young (from the interstate highway system to expansions of the great state public university systems); participated in voting itself declining taxes during its working years (the top marginal income tax rate fell from 91% when the first boomers entered the workforce to 35% today); and enjoyed increasingly generous entitlement programs for retirement (offset partly by the decline of guaranteed private pensions).

The Millennial Generation has been dealt a much tougher hand. It has matured in an era largely of stagnant or declining public investment, and it faces the prospect of both higher taxes during its working years (to support entitlements for a senior population expected to double by around 2040) and a retrenchment of those same benefits by the time it retires. The resolution of the fiscal cliff, and the longer term budget challenge, will either compound or blunt that inescapable inequity.

Brownstein's piece contains the shocking statistic, from the Urban Institute, that the federal government spends $7 per senior for every $1 it spends on people under 18. That probably exaggerates the generational inequity since programs like education are primarily funded at the local and state level, but it's still disturbing.

Of course, in the context of the fiscal-cliff stalemate, that argument could make it easy to defend cuts to Social Security and Medicare. Ironically, the party fighting to protect those benefits is the party of diversity, the Democrats, on behalf of a demographic group, white seniors, which overwhelmingly votes Republican. Because Brownstein's piece appears in the middle of a new debate among Democrats over whether President Obama was right to propose a Social Security benefit cut known as the chained CPI, it made me a little extra uncomfortable.

Formulating the fiscal-cliff conflict as a clash between the Brown and the Gray could serve to give a political boost to the side that says such a cut is a small price to pay, especially if the president can get funding for programs that benefit the young and brown in a fiscal cliff deal (and of course, he can't). I've already had supposed progressives on Twitter argue that the president shouldn't protect white seniors because they didn't vote for him. Now there's a new effort by liberals, including, shockingly, Nancy Pelosi, to insist the chained CPI isn't a cut.

Until now, it's been left to conservatives like Ross Douthat to suggest that entitlement reform is crucial because "brown and beige" young people won't be willing to support majority-white seniors. It would be a shame if liberals started borrowing such racial framing.

It's morally wrong, and politically stupid and demographically blinkered. Sadly, the empathy of the "gray" may be limited because they will never be "brown," but the brown will eventually be gray. And their parents and grandparents are already gray. Besides: We're either the party of justice for everyone, or we're not.

Finally, why do we accept a zero-sum formula anyway? Just because so many white seniors rejected the proven post-World War II formula for growing the middle class – which raised tax rates and flattened income inequality, believing that everyone does better when everyone does better  -- doesn’t mean that the coming multiracial generation of young Americans should do the same. Besides, if the president compromises by letting folks who make between $250 and $500,000 off the hook for tax hikes, he's doing a big favor for mostly white affluent folks at the peak of their earning power – and that hurts the multiracial younger generation, too.

So let's leave conservatives to pit the young against the old, instead of identifying the real demographic struggle: the rich against the rest of us. It would be sad to see liberals start doing it, too.