Parenting through the apocalypse

My daughter is worried about the end of times on Dec. 21. I laughed at first, but then I saw real fear 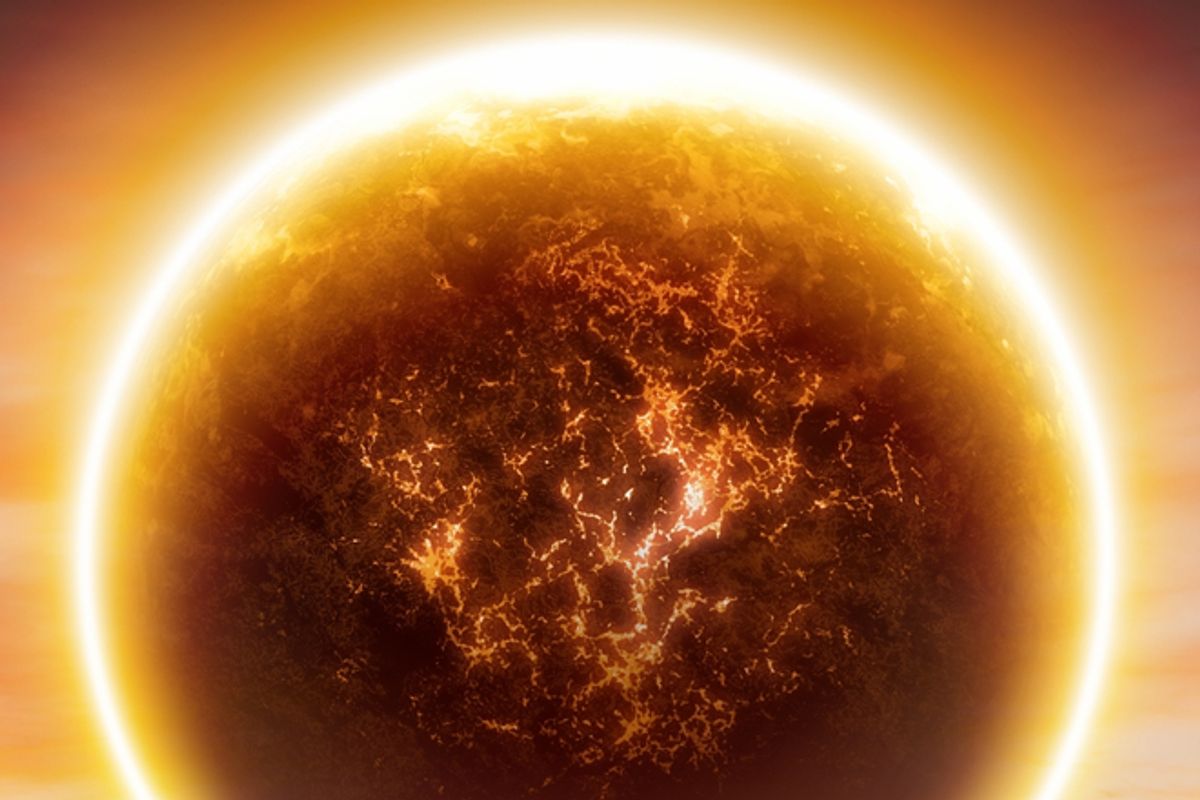 When my daughter was 4, she was afraid of the Humble Bumble from the Rudolph the Red Nosed Reindeer movie. She didn't like his sharp teeth. It was a cute fear. To this day, we joke about things having sharp teeth, like sharks. She body-boards 3-footers in shorties breaking over a sandbar off the southern Massachusetts coast. She's not afraid of sharks. But now that she is 11, she is afraid of the end of the world. My healthy child is afraid of dying.

"Andrew Kirby said that he doesn't have to do homework tonight," she tells me on Dec. 11.

"Why?" I ask. Kirby's a middle-school classmate, a chunky wild man.

"Because he said to the teacher: 'Why bother? The world is going to end on 12-12-12 at midnight.'" She rifles through a Samsung Galaxy tab before she even gets her little ballerina arms through her NorthFace sleeves.

She lets out an exacerbated argh and climbs into the backseat of her mother's Prius with her younger sister in dance leotards. Ah, yes, the world may be coming to an end soon, but we are still trying to save her while sticking it to Exxon one mile at a time.

Like most people, I have a passing familiarity with the fateful day of Dec. 21, 2012. I've seen shows on the History channel. I even met real live Mayans once in Cancun, although they didn’t speak any language I did and besides, I was too scared to ask about their calendar. Since then, I’ve been surprised by how calm America has been about our impending doom. We seem to have made our peace with it. I mean, if George W. Bush couldn't bring about the apocalypse with wars in Babylon, who can?

Come to find out, the Mayan calendar is really foretelling a transition of sorts. The earth, sun and center of the Milky Way are all supposed to align on that night, Dec. 21, 2012. Then we go into another cycle. It's not the end of the world, dammit. It's the end of a cycle. But the Mayans warn, the next four years will be trying times. Mankind is changing. Our world is changing. This is going to be one prolonged end time.

I can't seem to make my daughter relax about this fact.

I tell her that on Dec. 13 there is a massive Geminids meteor shower. I’ve taught my daughters how to spot constellations in the sky, and they can both find the big and little dipper, Orion and the letter M of Cassiopeia. But when I tell her about the meteor shower, she is not sure how to feel about that and asks if one might crash into the Earth. I tell her that I don't know, which is true. I don't.

That night, she asks to sleep with my wife and younger daughter downstairs. She is too afraid. She doesn't want to be alone down

stairs. She doesn't want to be left alone. She comes upstairs to take showers in my bathroom instead of hers when it is just the two of us at home. She’s getting antsy in the dark.

"What's this thing about Niburu?" she asks me. She's been YouTubing again.

,Oh that's this mysterious Planet X that is supposed to change the way the Earth rotates or something and may even hold an alien race.

"What do you think the end will be like, Daddy?"

"The end is mysterious, baby. We don't know when it is coming."

"Well, I can picture it," she tells me. "I'm asleep and then I hear a boom. And then I look out the window and see a flash of light. And then I feel the heat from the flames and then, poof, I'm dead."

"Does that scare you?"

That night, in my in box, the restaurant chain TGIFridays sends me a notice: end of the world margaritas. I hate margaritas in the winter. Delete!

My colleague sends me a video from Australian Prime Minister Julia Gillard. In it, she jokes about the end of the world. “My dear remaining fellow Australians. The end of world is coming. It turns out that the Mayan calendar is true,” she says.

I find it funny. But that morning, their mother has this look on her face. She is staring through the skylights over our bed. The sky is gray. I can see the clouds moving. A sparrow flies by.

"You're scaring the kids," she says. "She had a nightmare last night."

It was my firstborn. This was getting serious.

"She said we were all going to Brazil in a plane to escape but you stayed behind and you died. She was crying. She doesn't want you to die."

That did it. I admit, I'm not attached to this world. I know most people are. I don't need to live to 100, or 80, for that matter. I know, I'm an alien. Lately I’ve been worried about aging. This year I can see it in my face. I can feel it in my body. My daughter is becoming a teen. Her body hasn't changed yet, but her friends are developing. She will be soon. She talks about boys. In two very short years, she will be in high school. My life, a part of it, is dying. I hate that. The older she gets, the older I get. The older I get, the less relevant I feel.

I had a talk with her about tangible fears and irrational fears the other day, taking the tablet out of her hand to give her a break from obsessing over Dec. 21, 2012. I tell her we are all going to die one day, but we should not be so afraid of it.

I put my hand on her knee. She wants me to say no. "Yes. Daddy is afraid of dying."

"But everyone is afraid of dying, baby. We don't know when we are going to die. You are healthy. You are safe. You can't be afraid of things that are not hurting you."

"Exactly, like the sharp teeth on the Humble Bumble," I say.

You be afraid when you're bleeding in the water off seal island and there are great whites about. She knows what Air Jaws can do. You be afraid when a lion is chasing you. You don't be afraid if he is behind a cage. His teeth can’t get you from behind that glass.

She gets it. She doesn’t want to get it. But she does. She knows what is worth being afraid of. She knows the end comes by surprise sometimes: a car crash, a sunken ship, a fallen roof, the pull of a trigger in a classroom.

But as we approach the end, slowly or quickly I can’t tell yet, I know where I will be on Dec. 21, 2012. I will be in bed with my children, keeping them safe. Because when you die, where else would you want to be? And when you're a dad to little girls, where else would you want to be, one last time, before they're too old to want you there beside them.