Gun control activists hoped to deliver a petition with over 235,000 signatures, but were kicked out by security 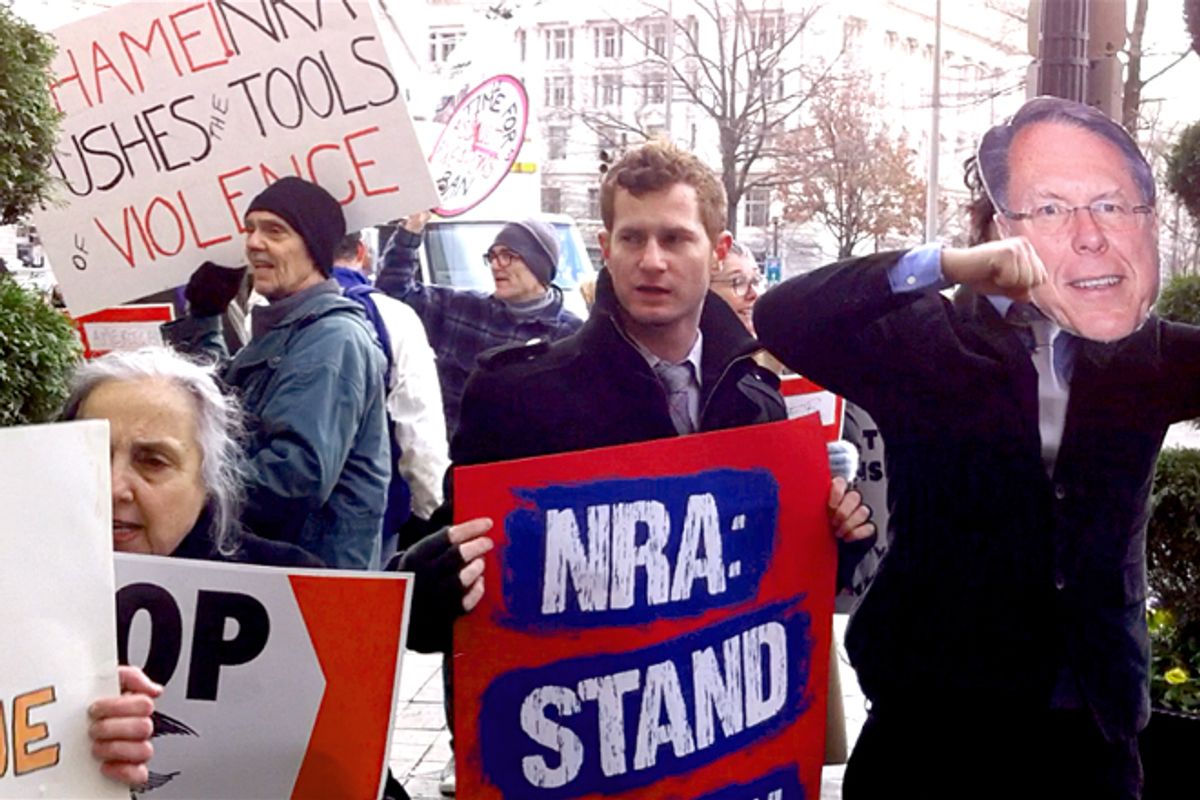 While NRA head Wayne LaPierre called for putting armed guards in every school in America inside the Willard Intercontinental Hotel today in Washington, protesters outside tried to deliver a petition signed by over 235,000 people calling for the gun lobby to suspend its lobbying efforts on gun control in the wake of the Sandy Hook elementary school shooting.

Naturally, the NRA was not too amenable to this, and hotel security escorted the protesters and their cardboard boxes filled with signatures to the street. Josh Nelson, an organizer with CREDO, which led the petition effort, said the activists had a simple message to the NRA: “We want them to stand down and get out of the way so Congress and the president can pass gun control legislation that will save lives.”

Nelson and several dozen volunteers had hoped to deliver the petitions to LaPierre and NRA staffers before the press conference. But when they entered the building, “the hotel staff informed us that it’s private property and that we are not welcome there, and they pushed us out the door,” he told Salon. He couldn't be sure that the NRA directed the staff to eject the protesters, or if the hotel was just doing its job to protect its clients.

The activists, who touted signs reading “another mother” or “another grandfather” or “husband” “against [a picture of an assault rifle],” lugged eight cardboard filing boxes filled with signatures, which represented only a fraction of the total number (the rest lived on a USB drive Nelson carried in the breast pocket of his grey blazer).

As demonstrators chanted about incarcerating the NRA, one counterprotester, Larry Ward, a Dick Morris protégé and conservative media consultant, decided to make a scene, by shouting, “arm the teachers, arm the principals!” The crowd closed in and shouting matches ensued, much to the delight of Ward, along with Adam Kokesh, the host of a libertarian Internet TV program, who relished confronting the activists with his camera.

Later, a CodePink protester managed to sneak inside and jump in front of LaPierre with a banner that read, “NRA stop killing our kids.” Hotel security escorted him outside and kept an eye on him as he rejoined the protesters on the sidewalk and exchanged yells with Kokesh.

"Wayne LaPierre's bizarre and quite frankly paranoid press conference today is a testament to just how extreme and out of touch the NRA's leadership has become," said Becky Bond, the political director of CREDO.  "If teachers could stand up to a gunman with a semi-automatic assault weapon, then Congress can stand up to the NRA and its lobbyists. The NRA is clearly doubling down on its extreme agenda in the wake of the Sandy Hook massacre. But the American people aren't going to forget what happened. And we are going to hold Congress and the White House accountable for meaningful action to address the crisis of gun violence in America."

Inside, LaPierre concluded the press conference by saying, "This is the start of a serious conversation. We won't be taking any questions today."