With the NRA and the Tea Party exposed as destructive crackpots, can the rest of us finally undo their damage? 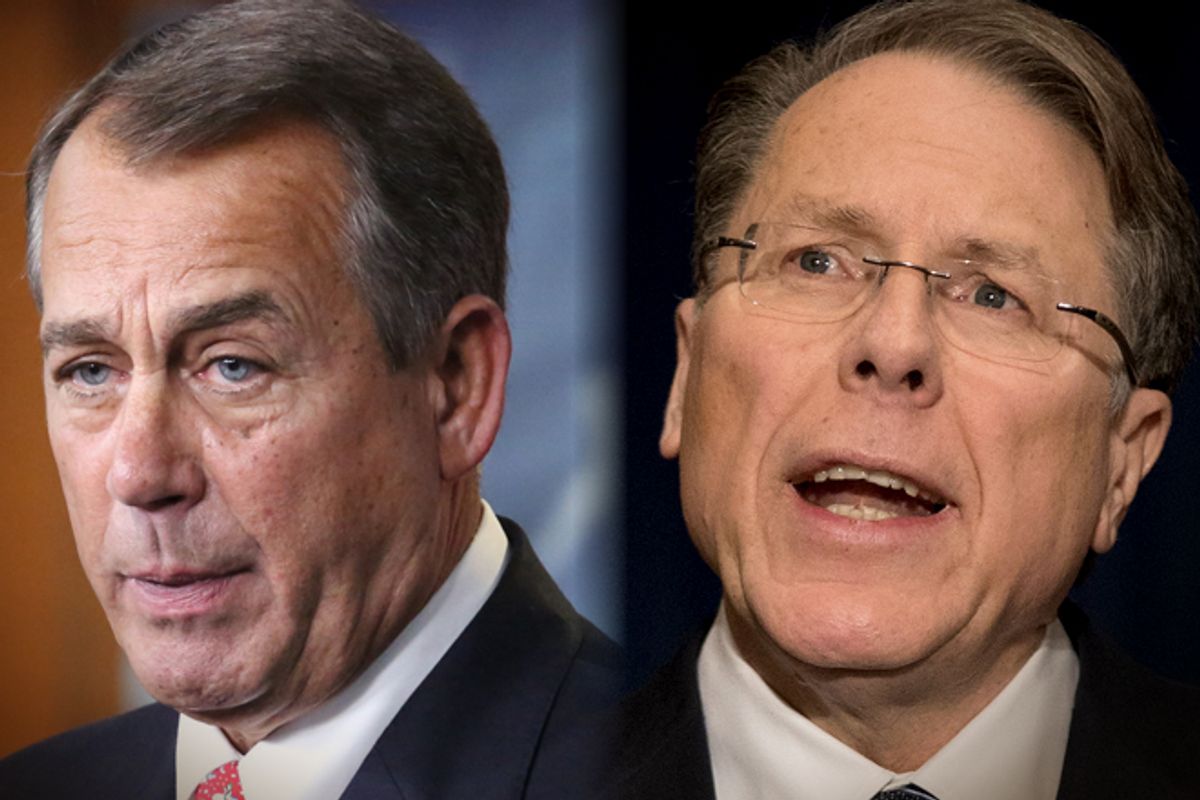 Just when it seemed the meltdown on the right couldn't get any more spectacular, after House Speaker John Boehner's Plan B humiliation Thursday night, the NRA's Wayne LaPierre self-destructed Friday morning. His bizarre self-serving tirade blamed everything but guns for the Sandy Hook massacre last week. He proposed placing an armed police officer in every school.

As usual for the NRA, the solution to gun violence is more guns. But finally, Americans are seeing that for the destructive illogic that it is. LaPierre is truly one of the bad guys. We don't need guns to fight him, though, we just need votes. And we need the politicians elected with our votes to stand up for us.

Last June, President Obama told a roomful of donors that if he were to be reelected, "the fever may break" and the Republican Party might return to its common-sense roots. It won't be that easy. Obama and the Democrats can't passively wait for relief from the sickness that claimed the GOP, even though it may seem that the party is self-destructing on its own. They are going to have to fight.

For at least the last decade, and arguably longer, we've been held hostage, as a nation, by bullies and crackpots. Democrats try to placate and compromise, but the bullies and crackpots only get crazier. They went silent on gun control, afraid of the NRA, yet the NRA and its friends on the right only became more extreme. They apologized for the excesses of big government and adopted formerly Republican market-based reforms like tax credits for poor people rather than welfare, and an individual mandate to purchase private health insurance rather than expanding a public program like Medicare. And Republicans abandoned those ideas and moved even further to the right.

Trying to reckon with what may have been the unintended consequences of the Great Society, they're now having to defend the New Deal, and hugely popular and successful government programs like Social Security and Medicare. But to defend those government successes, some are proposing to compromise, again.

Liberals and progressives I admire have been trying to prepare their allies to accept a compromise like the chained CPI, for instance, as better than going over the so-called fiscal cliff. And theoretically, depending on the deal Democrats are able to get, it could be. Theoretically. On Fantasy Island, perhaps. I apologize for lacking the imagination required to see the House GOP agreeing to such a deal. I could be missing something; maybe John Boehner will respond to his humiliation by teaming up with Nancy Pelosi to humiliate the wingnuts in his caucus. But I doubt it.

That's why standing up for Social Security has taken on outsize symbolic importance for some of us. Democrats have enabled the bullies, and they have to stop it. Likewise, when it comes to gun control, there can be no compromise with NRA crazies. I was about to explain why the idea of armed cops in schools is a non-starter – the House GOP would never pony up the funding, except maybe in exchange for eliminating Medicare – but really, why use political logic trying to reason with LaPierre and his backers?

"This is the beginning of a serious conversation," LaPierre told reporters, and then he said: "We won't be taking any questions." Seriously. He said that. The NRA has ceded its place in this conversation. Congress should move on without it.

Maybe the Mayans were right. Politically, it's the end of the world as we know it, or it should be: The extremists who have been running the country, either outright or by obstructing their opponents, have been exposed as self-dealing frauds. It's time for the rest of us to undo the damage they've caused.