Two 2012 titles offer two very different explanations for the war on science. Both are disturbing and discouraging 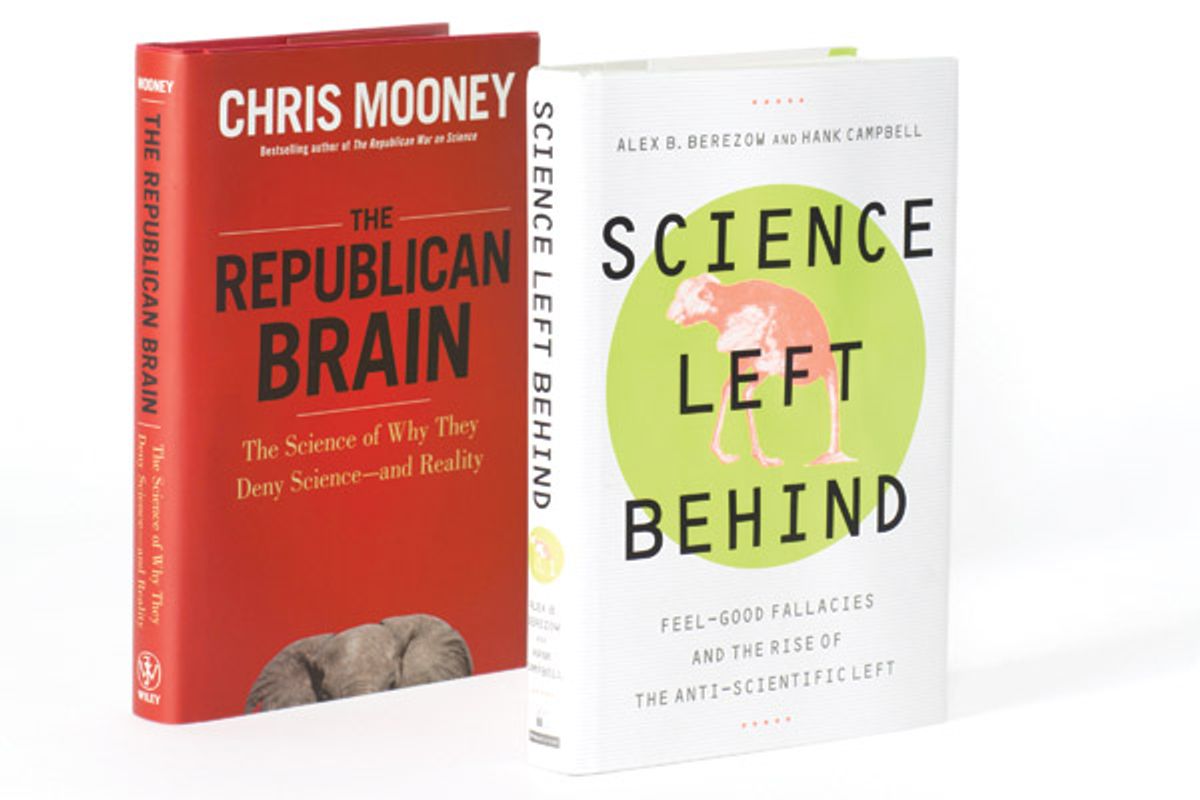 Times of intense ideological polarization are always dreary for reasonable people. Consider the Marquis de Condorcet, a brilliant scientist, mathematician, and political philosopher who was forced into hiding during the French Revolution after running afoul of the radical followers of Robespierre. During his months as a fugitive, Condorcet penned a treatise—now considered a major text of the Enlightenment—that envisioned a society founded on the principles of free inquiry, critical thinking, and science. But the nobleman was caught, and his vision for France died with him in a revolutionary prison cell.

Condorcet’s story opens "The Republican Brain," the science writer Chris Mooney’s lament about today’s polarized intellectual climate. Mooney mourns the death of Condorcet’s enlightened vision, and I suspect Alex Berezow and Hank Campbell would as well. Like Mooney’s, their new book, "Science Left Behind," describes a 21st-century American society that is the exact opposite of what Condorcet wanted and predicted. Both books condemn the magical thinking and distorted passions that shape our modern intellectual enterprise and diminish our lives.

But this is where the agreement ends. Mooney lays the blame for our misinformed and misguided society squarely at the feet of political conservatives who deny science and its methods. Berezow and Campbell are troubled by distortions of science on the political left.

Mooney examines the phenomenon of right-wing denial of science through the lens of cognitive psychology, a frame that is both well attuned to the bestseller-list zeitgeist and destined to fluster his ideological opponents by putting them on the couch. Mooney takes us on a fascinating tour of the psychological dynamics underlying biased thought. He explains with admirable clarity such concepts as cognitive dissonance, personality theory, and an array of automatic, emotional biases that allow wrongheaded ideas to persist.

To be sure, these are well-documented psychological processes that undermine all human decision making and action—not just that of Republicans. But Mooney is convinced—and convincing—that Republicans and Democrats are fundamentally different in the way they think about the world. Republicans have a different cognitive style than Democrats. They show lower tolerance for ambiguity and uncertainty, which makes them defensive about their beliefs and highly resistant to persuasion. Conservative Republicans score low on a personality trait called “openness to experience,” which encompasses curiosity and intellectual flexibility.

All of these processes contribute to what’s called “motivated reasoning”—which is not reasoning at all, in the classical sense. The theory, derived from modern neuroscience, holds that we often process information automatically and emotionally, without reflection or even awareness. These hidden emotional priorities cause us to misinterpret or dismiss evidence—even technical, scientific evidence.

This is not just a parlor game. This “politicized wrongness,” as Mooney labels it, has very high stakes. Just a few of the right-wing “truths” with no scientific merit: that global warming is not related to human activity and is not a threat, that abortion causes breast cancer and mental disorders, that homosexuality is a choice that can be reversed. The list goes on, with huge logical and political ramifications for health, war, and peace. But the ultimate harm, Mooney asserts, is the “utter erosion of a shared sense of what’s true.”

The stakes are not quite as frightening in the liberal assault on science, as detailed in "Science Left Behind." Berezow and Campbell call the villains here progressives, by which they seem to mean environmentalists, health-food advocates, and other groups whose personal life choices the authors resent. These behaviors include such “feel-good fantasies” as using water-conserving toilets, shopping at health-food stores, running barefoot, and conserving fossil fuels by driving Priuses.

If the authors’ point is that people on the political left sometimes misunderstand or distort science, just like people on the right do, then point granted. And some practices the authors criticize do carry serious public consequences—like the choice not to vaccinate children against serious disease, despite the evidence supporting inoculation and lack of evidence for risk. But people on the left do not have a monopoly on vaccine fearmongering; the sentiment has gained traction on the right as well, as evinced by Michelle Bachmann’s spooky remarks about the HPV vaccine in a Republican primary debate last year.

In any case, the vast majority of liberal behaviors that fall under Berezow and Campbell’s withering gaze are, at worst, just silly and uninformed consumption patterns. Right-wing fallacies with further-reaching implications are given lighter treatment. The authors think it’s fine to deny the theory of human evolution, for instance, which they characterize as a harmless personal choice.

Overall, the caricature of a cohesive liberal worldview that Berezow and Campbell draw rings false, resting as it does more on assertion and juxtaposition than on evidence. People choose to shop at Whole Foods or drive a hybrid for a variety of reasons, but these are not necessarily—as the authors suggest—the same people who are leaving their children unprotected against whooping cough. To suggest otherwise is tendentious.

Not to mention petty, which describes the book’s overall tone. Here are just a few of many examples: The authors attack a waitress at a Seattle coffee shop for defending (when asked) hormone-free lattes, calling her “the crazy café lady.” They dismiss vegetarians and other “food fetishists” for having an “innate resistance to meat.” They smugly label an environmentalist a “treehugger.” All this while seeming very pleased with themselves and their cleverness. "Science Left Behind" is small-minded, snarky, lacking in nuance—a perfect example of the emotional, undisciplined cognitive style that Mooney dissects.

Taken together, these two analyses are disturbing and discouraging. I doubt that readers will end up swayed to a fresh understanding or a more dispassionate belief system. Nearly 220 years after his death, the Marquis de Condorcet’s vision remains as elusive as ever.