What To Read Awards: Jason Diamond 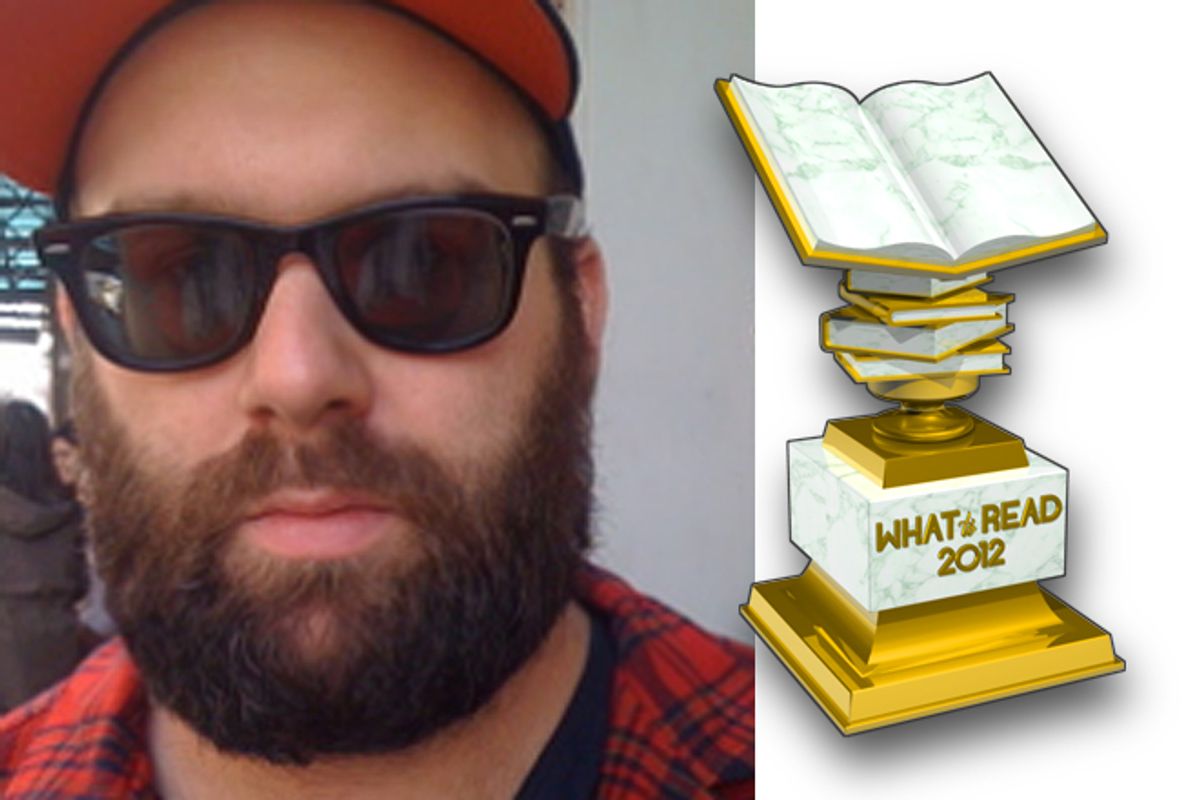 Jason Diamond is the founding editor of Vol. 1 Brooklyn.

1. "The Patrick Melrose Novels" by Edward St. Aubyn
2. "How Should a Person Be?" by Sheila Heti
3. "The Middlesteins" by Jami Attenberg
4. "Battleborn" by Claire Vaye Watkins
5. "Flatscreen" by Adam Wilson
6. "My Only Wife" by Jac Jemc
7. "The Scientists" by Marco Roth
8. "Laura Lamont’s Life in Pictures" by Emma Straub
9. "How to Get Into the Twin Palms" by Karolina Waclawiak
10. "Four New Messages" by Joshua Cohen

1. Explain why your No. 1 book was your favorite title of the year: I read "The Patrick Melrose Novels" not long after finishing up Season 2 of "Downton Abbey." Jumping from a whimsical First World War-era tale of a British aristocratic family into the disturbing and dirty lives of the more contemporary Patrick Melrose and his family was like going from a nice hot shower straight into a tub full of ice. Edward St. Aubyn writes beautifully about ugly people and their messy lives, and I loved every sentence.

2. What was the strongest debut book of 2012? Adam Wilson’s "Flatscreen" and Claire Vaye Watkins' "Battleborn." Wilson wrote one of the few novels I read this year that actually earned its comparison to Philip Roth. "Flatscreen" was hilarious and Wilson has a way with language that debut novelists are usually too afraid to show off. "Battleborn" was just such a rich and engaging debut collection of stories.

3. What book sits outside your list, but has either been overlooked or deserves more attention? Amelia Gray’s "Threats" and Matt Bell’s "Apocalypse Baby." Gray and Bell are both ridiculously talented writers, and both of these books should have been on my list, but somehow didn’t get on there by some oversight on my part.

4. Was there one book, either on your list or off your list, fiction or nonfiction, that seems to best encapsulate America in 2012? Raymond Kennedy’s "Ride a Cockhorse" and Seth Greenland’s "The Angry Buddhist." Kennedy’s book originally came out in 1991 (NYRB Classics published it again this year), and Europa Editions published Greenland’s Larry David-blurbed "The Angry Buddhist" this year. You could read them both together and get a good feel for the political atmosphere of 2012.

5. What was the single most memorable character from a 2012 book? Edward St. Aubyn’s Patrick Melrose. He’s the sort of character Martin Amis wishes he could write.

6. What is the book from 2012, either from your list or not, fiction or nonfiction, that is most likely to join the canon, or still be discussed 20 years from now? For fiction I think and hope it will be Sheila Heti’s "How Should a Person Be?" For nonfiction I’ll guess it’s Robert Caro’s latest LBJ biography. I haven’t found the time to read Caro’s "Passage of Power," but it’s hard to argue that the guy has sort of set the bar for biographies.

Jason Diamond is the author of "Searching for John Hughes or Everything I Thought I Needed to Know about life I Learned from Watching 80s Movies," out November 29.