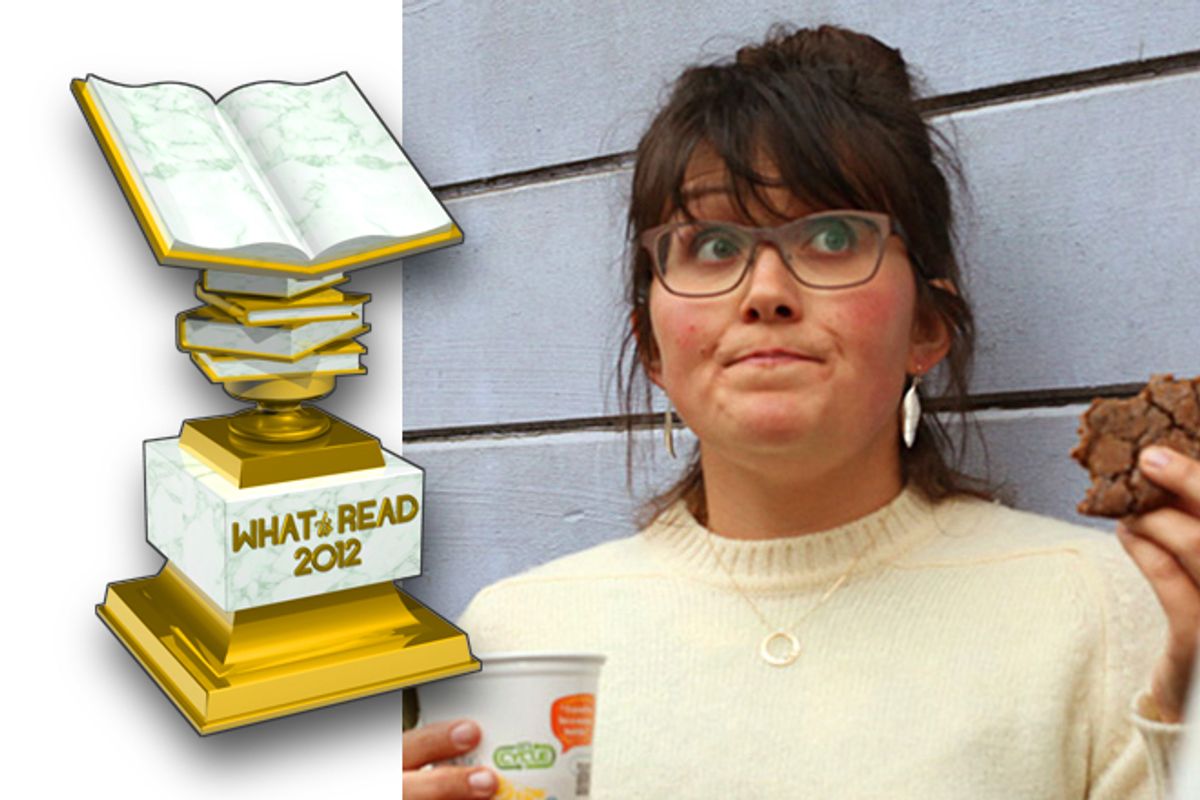 M. Rebekah Otto is the books editor of the Rumpus.

1. "The Guardians" by Sarah Manguso
2. "HhHH" by Laurent Binet
3. "By Blood" by Ellen Ullman
4. "Curiosity and Method: Ten Years of Cabinet Magazine"
5. "NW" by Zadie Smith
6. "Between Heaven and Here" by Susan Straight
7. "Tiny Beautiful Things" by Cheryl Strayed
8. "The Lifespan of a Fact" by John D’Agata and Jim Fingal
9. "How to Get Into the Twin Palms" by Karolina Waclawiak
10. "Hang Glider and Mud Mask" by Brian McMullen and Jason Jagel

1. Explain why your No. 1 book was your favorite title of the year: Though Sarah Manguso’s "The Guardians" is specifically about losing a dear friend to suicide, she pries open her intelligent heart to describe our strange, sad modern lives. I think about the small resonating moments of Manguso’s narrative every day.

2. What was the strongest debut book of 2012? Karolina Waclawiak’s "How to Get Into the Twin Palms." Very exciting.

3. What book sits outside your list, but has either been overlooked or deserves more attention? Sara Levine’s "Treasure Island!!!" (which came out in December 2011) is a funny, satirical number from Tonga Books, a new imprint from Europa.

4. Was there one book, either on your list or off your list, fiction or nonfiction, that seems to best encapsulate America in 2012? "Battleborn" by Claire Vaye Watkins

5. What was the single most memorable character from a 2012 book? Glorette Picard, in Susan Straight’s "Between Heaven and Here."

6. What is the book from 2012, either from your list or not, fiction or nonfiction, that is most likely to join the canon, or still be discussed 20 years from now? Zadie Smith will be remembered as one of the greatest writers of the early 21st, and "NW" is the beginning of a new period in her fiction, which is exciting for some of us and threatening to others.