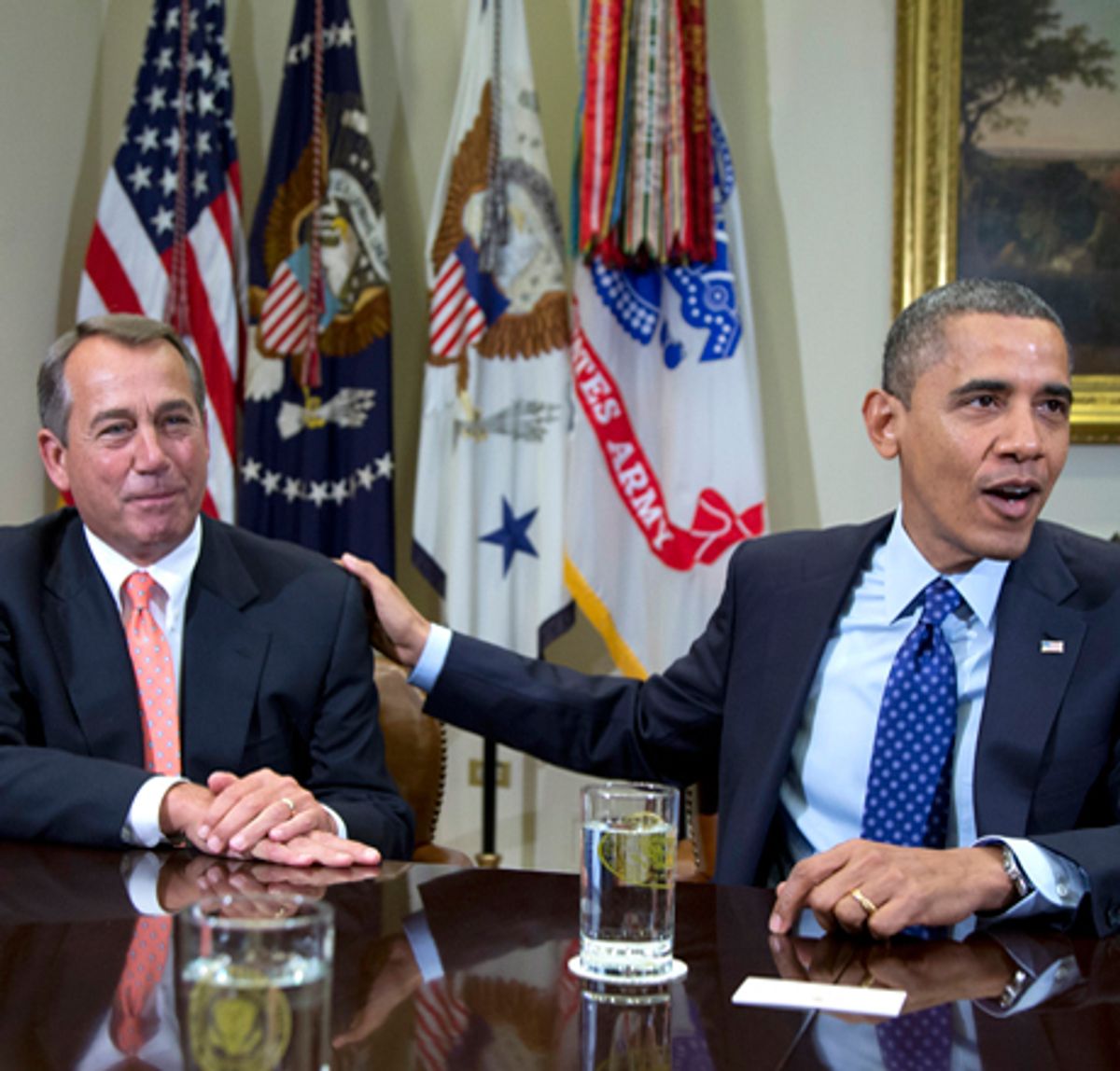 Last week, we learned that Speaker of the House John Boehner has no control over his majority. We've seen Boehner have trouble with his caucus before, of course -- a significant portion of these people are crazy -- but the failure of "Plan B" was different. In the past Boehner has had trouble whipping votes to support things that were destined to become law. Boehner couldn't get his caucus to support TARP because TARP was awful and was also definitely going to happen. Boehner couldn't get the votes for the 2011 debt deal because conservatives thought they'd eventually force an even better deal. But this was a totally symbolic gesture that never had any shot at passing the Senate or getting signed by the president. Boehner's "Plan B" was a stupid pointless empty gesture, and that is why its failure is actually slightly scary, in addition to being hilarious.

The point of "Plan B" was to give Republicans a means of blaming Democrats when everyone's taxes go up next year, while also giving them an opportunity to claim that they supported raising taxes on rich people. The problem was, Republicans really don't support raising taxes on rich people, and they feel so strongly about this that they didn't want to pretend to support a tax increase.

What is especially silly about all of this is that in any sort of sensible political system none of it would be happening. A majority of Americans just voted for Democrats to control the White House, Senate and House of Representatives, which would seem to indicate that a majority of American voters would just prefer it if Barack Obama, Harry Reid and Nancy Pelosi decided all of this for themselves. But that's not the way our archaic political system works, and instead we will watch this unpopular anthropomorphic Camel 100 carefully negotiate a compromise with the president that his party will refuse to support, until we either extend all tax cuts forever or "go over the cliff" and cause every Sunday show panelist in the country to hyperventilate until losing consciousness.

How did we get here? Keep in mind, your average congressperson is as dumb as your average regular person, and Republican members listen to the same talk radio and read the same right-wing blogs and watch the same Fox News as every other conservative. It's always been comforting to imagine that canny evil masterminds huddle in backrooms plotting how to use the right-wing media machine to manipulate the rubes into accepting whatever the corporate elites want, but the story now is that the canny masterminds have no control over the media operation they've built and the "grownups" cannot convince the true believers to do shit. There's really no talking sense into Michele Bachmann and Steve King, and every two years gerrymandered ultra-conservative districts send more and more Kings and Bachmanns to the House. And Republicans know that their safe districts are only safe from Democrats, not even-crazier Republicans.

John Boehner will probably be fine. He'll likely remain speaker even, mostly because no one else wants that horrible job. America might not be fine.

"Going over the fiscal cliff" will be a fun adventure at first, especially because it has been so long since America has had any sort of tax hike or defense budget cut, but shortly after the "cliff" comes the debt ceiling increase vote, and there is really no chance, at all, of the House raising the debt ceiling, under any circumstance. Maybe if the president agrees to block grant Medicare and return America to the gold standard. And promises to personally fire 100 teachers.

The idea that "going over the cliff" would give the president enough leverage to get a halfway decent deal -- with some stimulus up front and everything! -- depended on a House of Representatives capable of acting rationally. it's apparent that they are in fact prepared to intentionally tank the entire American economy.