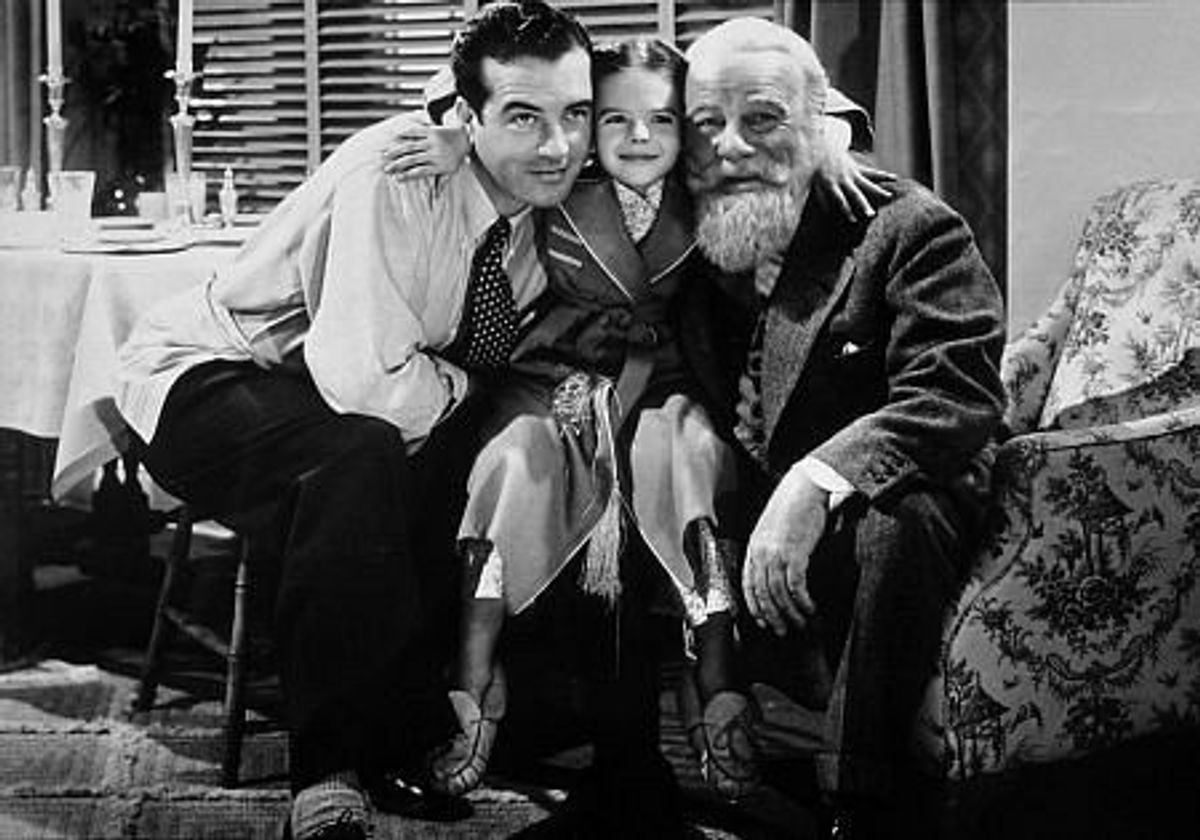 LAST WEEK, my wife, Stephanie, and I decided to watch Miracle on 34th Street with our kids, who are six and almost eight. As Kris Kringle strolled through Midtown Manhattan as the opening credits rolled, we realized that, although the film has been on television every December since its release in 1947, and although we’d both seen big chunks of it, neither of us had ever watched the entire movie from start to finish (and certainly not without commercial interruption). We didn’t know what we were in for.

One of the challenges with watching old movies with your kids is that the mores have changed radically in the last half century. Many old cartoons are staggeringly racist. Almost everything made before, say, 1985 is egregiously sexist; there’s one awkward sequence in Rudolph the Red-nose Reindeer, for example, when Rudolph’s mother and Clarissa, his girlfriend, don’t chase after the red-nosed runaway because they are women, and they know it’s not their place. The men in old movies are forever on the verge of date rape (the old cartoons, too; I’m looking at you, Pepe LePew), always quick to resort to violence, to fix a stiff drink, to blow secondhand smoke in a child’s face, to slap a woman across the face to prepare her for lovemaking, to gay-bash. Is that how society was in the forties? I don’t know, but I’m not entirely comfortable exposing my kids to it.

Our anxiety grew as we met Natalie Wood’s character, eight-year-old Susan Walker, who resolutely does not believe in Santa Claus. “I don’t believe in filling her mind with fantasies,” her mother explains. Shit, I thought. Is this stupid movie going to blow the Santa secret in the first reel?

I’m pleased to report that our concerns were unfounded. Not only does Miracle on 34th Street not reveal the truth about Mr. Kringle, it is almost shockingly current. There were exactly three moments when I was aware of the age of the film: when Susan is allowed to watch the Thanksgiving parade with the grown man in the apartment across the hall, the attorney with the Beavis-and-Butthead-would-chuckle-at-it name of Mr. Gailey, whom her mother does not know at all; when Kringle, whom we are led to believe is in fact the real Santa, says that the company psychologist should “be horsewhipped” and then whacks him with his umbrella; and when Mr. Gailey invites Kringle to share his apartment until Christmas (“There are two twin beds!”), and subsequently fires up a cig after he brushes his teeth.

These are minor quibbles. On the whole, the film is decades ahead of its time, offering positive messages that still carry weight in the 21st century.

First, it’s almost astonishingly feminist. The film centers on a Macy’s advertising executive, Doris Walker, and her daughter, the aforementioned Susan. Doris, as we learn early in the film, is divorced; Susan’s father is a deadbeat whom the girl has not seen since he left. The trauma of this separation, we learn, is what makes the guarded Doris so reluctant to believe in Santa Claus. That a film about a divorcée was even made in 1947 is remarkable. But Doris Walker is not any divorcée. She excels at her job—which involves organizing and coordinating the Macy’s Thanksgiving Day Parade—and even though she’s the only female executive, no one ever acts like this is unusual, or treats her differently because of her gender. Nor are we subjected to some explanation for how such a job happened to be held by a woman. She just has it, and it’s presented as fait accompli, as unremarkable. Mr. Macy doesn’t pat her on the ass when the Santa Claus she hires winds up being so popular; he gives her a bonus—the same bonus he gives her male colleague. In short, Doris Walker is regarded as an equal to the male execs. A single mother who is an executive! Thirteen years before Peggy Olsen joined the secretary pool at Sterling Cooper!

Even at the end of the movie—I’d say spoiler alert, but do I really have to do that for a film that’s 65 years old?—when they see the FOR SALE sign on the house that Susan wants, Doris and her new beau, Mr. Gailey, never say that they will marry—only that they could buy the house together. The closest mention to wedding bells is a vague reference to some “plans” they’d discussed. Living in sin! In 1947!

If Miracle is pro-woman, it is also pro-kid. The film treats its children as thinking creatures, and does not dumb down the action for their benefit. Susan, in fact, is one of the smartest characters in the movie, St. Nick’s harshest critic. Only when she believes in Santa does Kringle consider himself a success. Instead of not even allowing for the possibility that the Santa story is make-believe, as would be the case today—witness Stephanie and I fearing that Miracle on 34th Street would blow our cover!—it engages with doubts kids already have. It speaks to them as real people, just as Kringle speaks to Susan.

Too, there is nothing religious about the movie. While the action centers on a figure associated with Christmas, Jesus is never alluded to. We are not told, as Charlie Brown and Linus make a point to every year, that the meaning of Christmas involves three wise men and a manger and shepherds keeping watch over their flocks. Miracle on 34thStreet taps into something nondenominational and universal. This is also unusual for 1947, when the concept of religious inclusivity was more or less unknown.

Decades before Schultz and Seuss, Miracle on 34th Street rails against commercialism. The reason the Macy’s Santa is such a hit is because he tells parents where to get the best prices on toys they’re looking for, even if those best prices happen to be at Gimbel’s. Here St. Nick is a plump and jolly Groupon machine. Too often, Santa Claus is an agent of commercialism—the mythical figure who deposits piles of expensive toys under the tree, the overlord of the North Pole toy factory, the pitch man for Black Friday sales. He is a creation of Madison Avenue, after all. The filmmakers manage to extract Santa from this bit of hucksterism—a neat trick.

Then there is the way it presents the Santa myth. While the film clearly wants us to believe, as Susan and Doris wind up believing, that this department store Santa is the real McCoy, they never go all the way. They leave just enough ambiguity to force us to make the leap ourselves. We don’t end with Santa in his sleigh, ho-ho-hoing in the sky above Great Neck; we close with a cane by a fireplace that even the faithful Mr. Gailey, who has just convinced the State of New York to declare his client the actual Santa Claus, admits might be left there by the previous owners.

“When I see that cane,” my mother told me, “I always start to cry.” It is one of the great movie moments—as is the scene in the courtroom when the postal workers deliver the teaming bags of letters to Santa Claus. But my favorite part is when Doris, Susan, and Mr. Gailey are driving home at the end, and Susan recognizes the house she’d asked for. “Stop the car!” she shouts. “Stop the car!” Susan has been self-composed for the entire film; we catch glimpses of quiet tenderness, but never moments of childhood abandon, of genuine, happy surprise. And this just knocks her proverbial socks off. Santa came through! That’s the house she wanted!

Natalie Wood’s performance in the film, as I’m not the first to notice, is ridiculously good; her Susan Walker is every bit as superb as Edmund Gwenn’s iconic Kris Kringle, for which he won an Academy Award (and famously said, in his acceptance speech, “There really is a Santa Claus.”). Let me end with this bit of trivia: during the filming of Miracle on 34th Street, Natalie Wood, who was eight years old at the time, actually thought Gwenn, who on set was as kindly as the man he plays in the film, was Santa. Only when she saw him in regular clothes at the wrap party did she realize he was only an actor. In other words, she pretended to believe the man with the white beard was a fake, even though she herself felt otherwise. If that doesn’t signify an acting job well done, I’m Kris Kringle.