There are as many nonreligious Americans as evangelicals -- so why does no one take this voting bloc seriously? 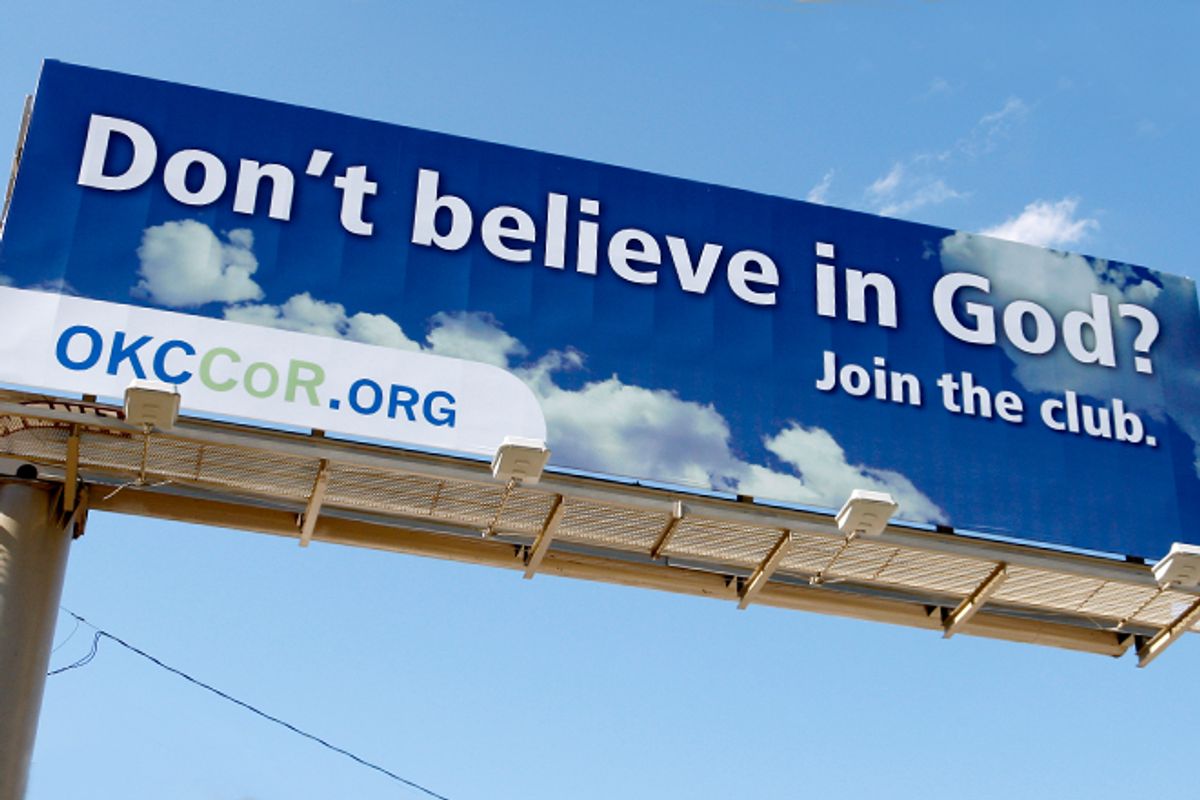 In the aftermath of President Obama's electoral romp over Mitt Romney, the media and pundits have paid much attention to the demographics that propelled him to victory, especially women, Hispanics and young voters. But there's one more group that played an underappreciated yet crucial role in his reelection, and which only now is starting to get the recognition it deserves.

A growing segment of American society -- up to 20%, according to recent surveys, and higher than that in younger generations -- is what pollsters call the "nones," people who answer "None of the above" to questions about religious affiliation. This includes declared atheists and agnostics, as well as people who choose not to identify with any organized religion. In many swing states like Ohio, Florida and Virginia, President Obama lost both Protestants and Catholics by relatively small margins, but won nonreligious voters by huge margins, enough to put him over the top. In the country at large, there are now as many nonreligious people as there are evangelical Christians.

But the political loyalties of this group can't be taken for granted. For example, despite his dependency on unaffiliated voters, President Obama has broken a campaign promise by continuing to fund and promote George W. Bush's "faith-based initiative," which funnels federal money to religious charities that discriminate in hiring. In effect, nonbelieving taxpayers are being forced to subsidize jobs they could never be hired for.

In this cycle, the specter of a Romney presidency indebted to the religious right persuaded nonreligious voters to choose the lesser of two evils. But there's no guarantee that this will happen in every future election. If Democrats continue to antagonize atheists and other nones, they may just stay home, and that's a prospect politicians shouldn't take lightly. As the Republicans become increasingly ideologically purified, Democratic candidates will need, more than ever before, for their base to turn out in big numbers, and that includes the nonreligious. Anything that turns them off, that dampens their enthusiasm or discourages them from showing up, could mean the difference in a close race.

So, how do politicians motivate the nonreligious vote? How do they appeal to them and get them to come out and support them? Here are a few suggestions.

1. Be one yourself. Until the last election cycle, there was just one out-of-the-closet atheist in the entire U.S. Congress, California representative Pete Stark. But following the 2010 redistricting, Stark was forced into a runoff race against a fellow Democrat and lost. There was some initial excitement over reports that the new Arizona congresswoman-elect Kyrsten Sinema was an atheist, but her campaign later disavowed that label, saying merely that "she does not consider herself to be a member of any faith community" (although by definition this still makes her a "none"). Nonreligious Americans won't automatically vote for a nonreligious politician. Even if they have a (lack of) belief in common, they may still disagree on any number of other important issues. But at the very least, it's a good indicator that that politician has had the experience of being an outsider in a Christian-dominated political community, just as many people have, and has an incentive to cast votes for a more enlightened and tolerant politics on that basis.

2. Even if you're religious, don't gratuitously bash or exclude those who aren't. For the most part, the nonreligious are politically realistic. We know that in a society as religious as the United States, some amount of pandering is an electoral necessity. But just because you speak to churches doesn't mean you can't also speak to the unchurched. In March 2012, for example, the Reason Rally brought together tens of thousands of American nonbelievers on the National Mall in Washington, DC. One of the speakers at that event was Iowa senator Tom Harkin, and despite some grumbling over his support of non-evidence-based medicine, we recognized that it took political courage for him to address us. The next time he's in a tight race, it's very possible that a few Iowa nonbelievers will remember that, and will be willing to do just a little bit more to support him.

Of course, there are also politicians who serve as examples of what not to do. When student activist Jessica Ahlquist waged a brave but lonely battle against an illegal prayer banner in her Rhode Island public high school, her Democratic state representative, Peter Palumbo, denounced her as an "evil little thing," an outrageous and completely gratuitous insult. It's safe to say that by scorning an important demographic of Democrats, Palumbo has effectively sunk any chance of ever being nominated for a higher office.

3. Prove your intellectual independence. Nothing makes nonreligious voters more nervous than a candidate who gives the impression that his political platform comes straight from the proclamations of his church, with no critical consideration or judgment in between. We'll be greatly reassured if you can prove that you have a mind of your own. President John F. Kennedy, although he was a Roman Catholic, gave the template for how to do this in a stirring speech that's still considered one of the finest examples of pro-secular rhetoric in American history:

I believe in an America that is officially neither Catholic, Protestant nor Jewish; where no public official either requests or accept instructions on public policy from the Pope, the National Council of Churches or any other ecclesiastical source; where no religious body seeks to impose its will directly or indirectly upon the general populace or the public acts of its officials, and where religious liberty is so indivisible that an act against one church is treated as an act against all.

(This is the speech of which Rick Santorum said, "It makes me throw up" -- another strong point in its favor.)

In 2012, Joe Biden gave a similarly strong answer during the vice-presidential debate. When he was asked about abortion, he made it clear that, regardless of his beliefs, it's wrong to legally impose one's private religious convictions on others:

I accept my church's position on abortion as what we call a de fide doctrine. Life begins at conception in the church's judgment. I accept it in my personal life. But I refuse to impose it on equally devout Christians and Muslims and Jews, and I just refuse to impose that on others... I do not believe that we have a right to tell other people that they can't control their body. It's a decision between them and their doctor.

4. Stand up for separation of church and state. "Secularism" is often treated as if it were a dirty word, and we want to reclaim it and give it the robust defense it deserves. What we long for, perhaps more than anything else, is a candidate who can articulate why separation of church and state is a good thing and an essential American value. We want to hear you say that church-state separation is clearly set forth in the First Amendment, and that it's spared us from religious wars and persecutions like those that ravaged Europe for centuries. We want to hear you say that America is, and was always envisioned as, a culturally and intellectually diverse melting pot whose people could all live together in peace, and that Thomas Jefferson's wall of separation helps guarantee that for everyone. It's good for religious minorities, so that their right of free exercise won't be trampled, and it's good for religious majorities, so that they're not tempted to sell out their principles for political power or expediency. Secularism is and always has been part of America's DNA, and we'll respond positively to leaders who aren't afraid to say so.

5. Stand up for marriage equality and reproductive choice. The nonreligious are strongly progressive on social issues. We consider it self-evident that same-sex couples should have the same rights and freedoms, including the right to marry, as opposite-sex couples, and we believe that those who oppose LGBT equality will soon be viewed with the same universal scorn and revulsion with which we now view those who opposed interracial marriage. And as surveys consistently show, nonbelievers are overwhelmingly pro-choice. We tend to see abortion as a more private and personal issue, and we take a dim view of laws that deny women autonomy over their own bodies. Politicians who condescend to women or speak in belligerent terms about outlawing abortion, as so many Republicans did in 2012, are apt to make nonbelievers respond with distaste.

6. Stand up for science. The nonreligious have no use for religious dogmas being passed off as science. We want candidates who take a firm line against creationism or abstinence-only sex ed, who affirm that these are religious ideas that can be taught at home or in church, but which have no place in our secular public schools. But it doesn't end with opposing religiously motivated pseudoscience: we also want to see good science promoted and supported. We want candidates who'll support generous funding for fundamental scientific research, and not just those branches of science that have military applications. We want to see candidates who accept, and are willing to act on, the overwhelming scientific consensus about the reality of human-caused climate change (as compared to the conservatives who deny it for explicitly religious reasons). We want investment in alternative energy, in next-generation infrastructure and mass transit, and in making higher education as widely available and affordable as possible. Since it's a well-known fact that greater education correlates with less religious extremism, this is not only good policy, it's good politics, and it benefits both progressive Americans and America as a whole.