Don't believe the NRA spin: The '94 assault weapons ban was full of loopholes, but studies prove it was effective 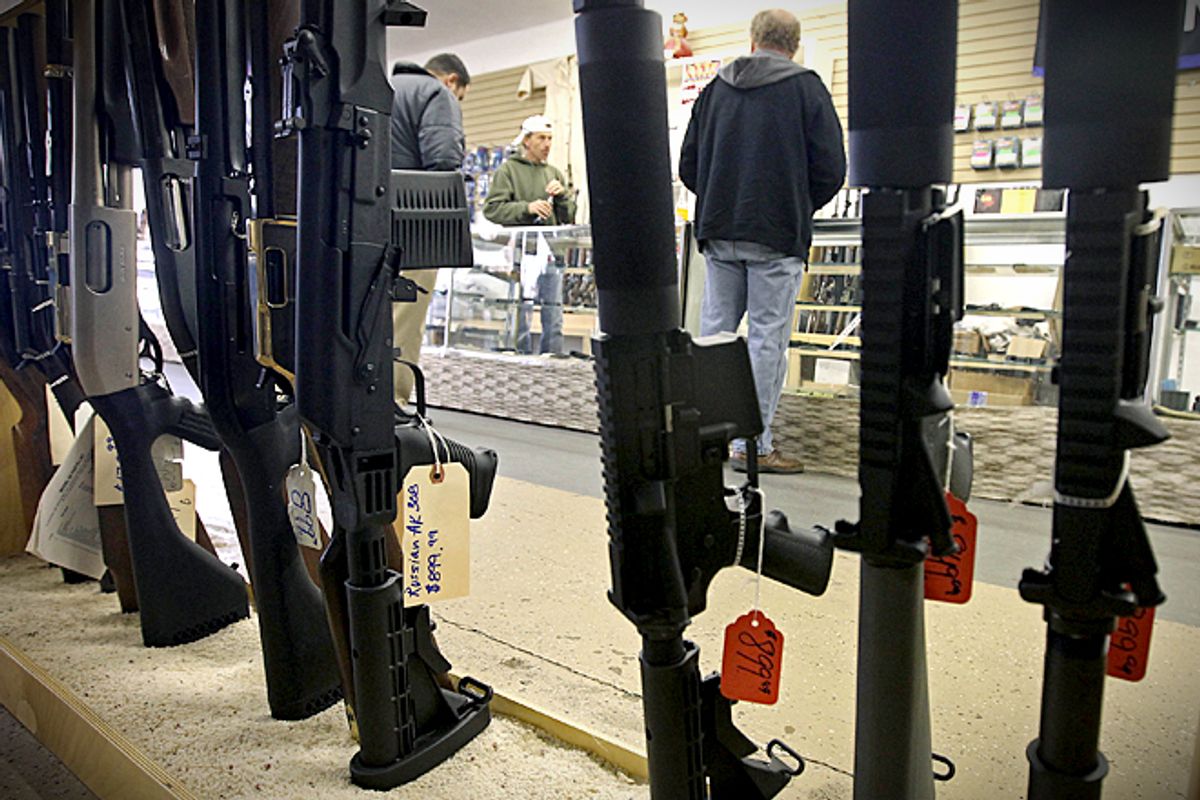 As Democrats move to once again ban assault weapons and NBC host David Gregory gets investigated for using a high-capacity magazine, banned in D.C., as a prop in his interview with the NRA’s Wayne LaPierre, one key question still hasn’t been properly addressed by the media thus far -- did the 1994 Assault Weapon Ban actually work?

Even Gregory, who convincingly played a devil's advocate to LaPierre Sunday, was dismissive of its effect on Sunday. “I mean the fact that that it just doesn't work is still something that you're challenged by if you want to approach this legislation again,” he said of the ban to New York Democratic Sen. Chuck Schumer, a supporter of the ban.

There’s a dearth of quality empirical research on the efficacy of the ban, thanks in part to Congress’ statutory limitations on the type of gun violence research the federal government is allowed to conduct. Pro-gun lawmakers made it illegal for research agencies to advocate for gun control, which effectively means looking for any connection between guns and gun violence, but the evidence suggests the law had positive effects, if not as much as advocates would like.

The single formal assessment of the ban, as required by Congress in passing the law, was conducted by criminologists Christopher Koper, Jeffrey Roth and others at the University of Pennsylvania (Koper is now at George Mason). The National Institute of Justice, the research arm of the Department of Justice, paid for the evaluation, which was first conducted in 1999 and updated in 2004, and looked at everything from homicide rates to gun prices.

A few key findings emerged. Overall, banned guns and magazines were used in up to a quarter of gun crimes before the ban. Assault pistols were more common than assault rifles in crimes. Large-capacity magazines, which were also prohibited, may be a bigger problem than assault weapons. While just 2 to 8 percent of gun crimes were committed with assault weapons, large-capacity magazines were used in 14 to 26 percent of of firearm crimes. About 20 percent of privately owned guns were fitted with the magazines.

But even though assault weapons were responsible for a fraction of the total number of gun deaths overall, the weapons and other guns equipped with large-capacity magazines “tend to account for a higher share of guns used in murders of police and mass public shootings,” the study found.

This shouldn’t be surprising to anyone paying attention to the recent history of mass shootings. In just the past year, the same .223 Bushmaster AR-15 assault rifle was used  in the Aurora, Colo., theater massacre, the shooting at the Clackamas Mall in Oregon, the Newtown elementary school shooting, and, just a few days ago, the killing of two firefighters in upstate New York. Jared Loughner used 33-round high-capacity magazines in a handgun to shoot former Congresswoman Gabrielle Giffords and more than a dozen others. Seung-Hui Cho used a 15-round magazine to kill 32 and wound 17 at Virginia Tech in 2007.

An October 2012 study from Johns Hopkins, which looked at newer data than Koper’s, concluded that that “easy access to firearms with large-capacity magazines facilitates higher casualties in mass shootings.”

So, according to the official study, was the ban effective in stopping killings? The short answer is yes, though it’s a bit unclear because of the massive loopholes in the law. “Following implementation of the ban, the share of gun crimes involving AWs [assault weapons] declined by 17 percent to 72 percent across the localities examined for this study (Baltimore, Miami, Milwaukee, Boston, St. Louis, and Anchorage),” the Koper study concluded.

Data from the Bureau of Alcohol, Tobacco, Firearms and Explosives (ATF) also shows a significant drop in assault weapon usage in gun crimes. In the five-year period before the enactment of the ban, the weapons constituted almost 5 percent of the guns traced by the Bureau (the ATF is responsible for tracking guns used in crimes), while they accounted for just 1.61 percent of gun traces after the ban went into effect -- a drop of 66 percent. The effect accelerated over time, as the guns presumably became harder to find.

The problem with the ban, as both gun rights advocates (seeking to cast aspersions on the law) and gun control proponents (seeking to explain its limited impact) agree, is that it was weak to the point of being meaningless. As the bill made its way through Congress, gun lobbyists managed to create bigger and bigger carve-outs, the largest being the grandfathering in of guns and magazines produced and owned before the ban went into effect. The guns and magazines could also continue to be imported, as long they were produced before the law went into effect.

“The ban’s exemption of millions of pre-ban AWs and LCMs ensured that the effects of the law would occur only gradually. Those effects are still unfolding and may not be fully felt for several years into the future,” Koper and his colleagues added.

The other big exemption in the law was the narrow definition of what the government considers an assault weapon. The ban initially targeted 18 gun models, and then prohibited any future models that contained two or more “military-style” features. Some of these features are decidedly superficial, such as a collapsable stock or muzzle shroud, leading the NRA to dismiss the category of assault weapons as artificial and “cosmetic.” Indeed, gun manufacturers were able to legally produce and sell nearly identical guns to ones that were now prohibited by making a few minor tweaks.

Since the ban was allowed to lapse in 2004, there hasn’t been another comprehensive national study. There is, however, some encouraging data on the state level. A Washington Post analysis of gun seizures in Virginia showed a significant drop in the number of high-capacity magazines seized by police during the 10 years the ban was in effect, only for the number to return to pre-ban levels after the law expired. In 1994, the year the ban went into effect, police in the state seized 1,140 guns with high-capacity magazines. In 2004, its last year on the books, that number had dropped to 612. By 2006, it was back to over 1,000.

Garen Wintemute, the director of the Violence Prevention Research Program at the University of California, Davis Medical School, looked at his state’s experience and found a troubling pattern in who purchases guns that were once banned. First, “among those purchasing handguns legally, those with criminal records were more likely than others to purchase assault-type handguns,” he told Salon. Second, “among those purchasing handguns legally who had criminal records, those purchasing assault-type handguns were much more likely than those purchasing other types of handguns to be arrested for violent crimes later.” He wasn’t able to study rifles because the state's archive of purchases was limited to handguns.

Abroad, the data is even more convincing. In Australia, a 1996 mass shooting that left 36 dead led the conservative government to act swiftly to ban semi-automatic assault weapons with a much stronger law. They did not grandfather in old guns and paid to buy back old ones. Gun-related homicide plummeted by 59 percent between 1995 and 2006, with no corresponding increase in non-firearm-related homicides. Meanwhile, gun suicides -- which are responsible for most firearm deaths in most developed countries --  dropped by a whopping 65 percent. Robberies at gunpoint also dropped significantly. In the decade prior to the ban, there were 18 mass shootings. In the decade following it, there were zero.

The resounding success of the Australian model shows where the U.S.'s attempt to ban assault weapons failed. By the same token, it shows where we could succeed by implementing a real ban without the carve-outs of the the 1994 law.