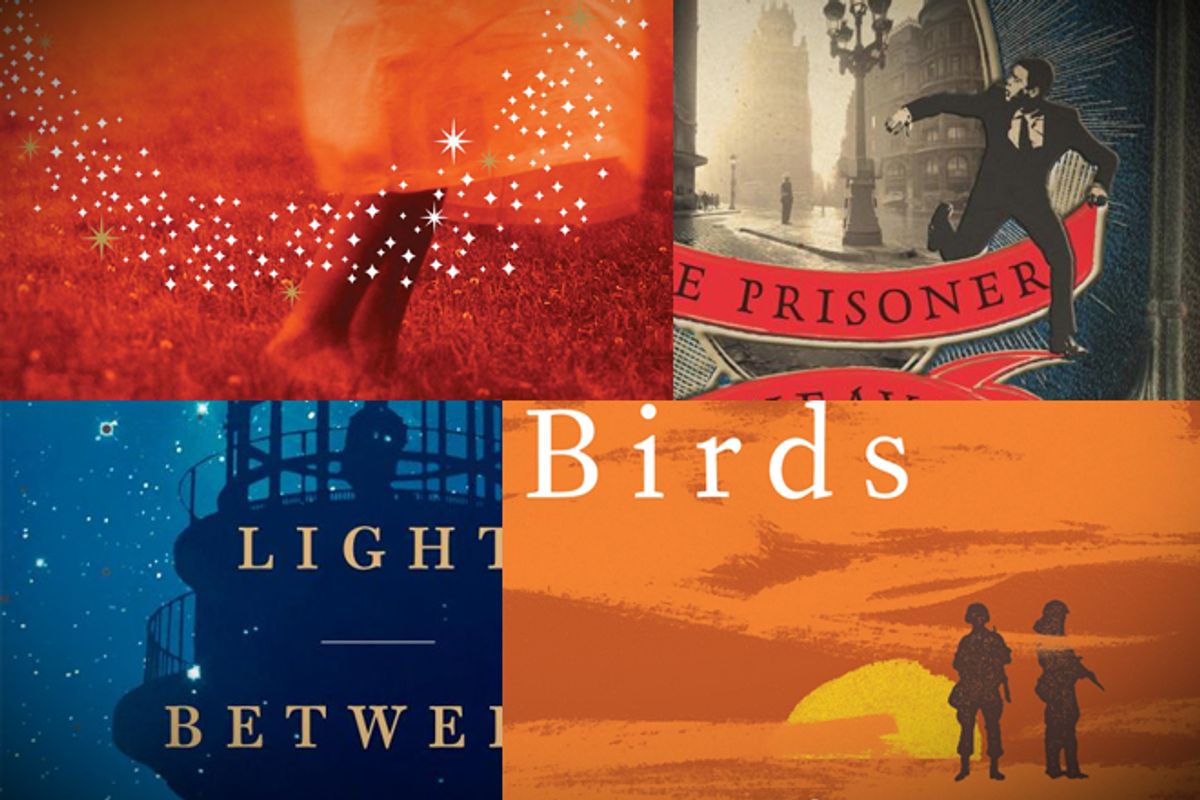 Every week I pick one book to review for the column What to Read -- a book about which I feel genuinely enthusiastic. That doesn't mean I read only one book per week. It often takes me several tries before I find a title I can wholeheartedly (or most-heartedly) recommend. Sometimes I sample books you've never heard of (and probably never will hear of), but many's the time I take a pass on a widely celebrated title. Here are few of the more notable books that failed to impress me in 2012. A novel about the Iraq War, written by a veteran of that war, this was one of the year's most highly praised works of fiction. It won the Guardian's First Book Award, was a finalist for the National Book Award and made the New York Times Book Review's ten-best list. "The Yellow Birds" is a sincere and serious-minded novel, and that may be part of the problem. Given the war's status as bloody fiasco perpetrated by a delusionally self-confident Bush Administration, the pitch-black comic tone of Ben Fountain's "Billy Lynn's Long Halftime Walk" struck me as better fit for the times. But what most put me off Powers' debut is its vaunted style, part of that school of prose -- commonly referred to as "lyrical" -- in which seemingly every sentence must be tortured into some unprecedented and extravagantly figurative metaphor or turn of phrase: "While we slept the war rubbed its thousand ribs against the ground in prayer" is the fourth line. This is tiresome to read and far better suited to a narrative in which not much happens. When applied to matters of life and death it struck me as grotesquely over-aestheticized. Published during the summer as a modestly promoted midlist title, this novel about a married couple living in an isolated lighthouse off the coast of Australia enjoyed an unexpected surge of interest after it got a few good reviews and support from indie booksellers. The couple, unable to have a child of their own, find an infant adrift in a boat and the lighthouse keeper, against his better judgement, allows his lonely wife to keep it. It's a situation that probably won't end well, but I cannot say that I was sufficiently interested in how it did end to stick around and find out. Who can say why we are bored by some books? It's easy to claim "nothing happens," although in most case when readers make this complaint it simply isn't true. It's my belief that I found "The Light Between Oceans" dull because it lacked atmosphere, the ability to make the lighthouse and its island sufficiently vivid and sensual in my imagination. Yeats said he felt sea spray on his face when he read "The Odyssey;" all I felt was the vague hankering to read something else. The winner of both the Hugo and Nebula Awards in 2012, this novel sounded right up my alley: a story about a bookish 15-year-old girl in which the supernatural elements may or may not be real. The narrator is the surviving member of a pair of Welsh twins trying to get on with her life after successfully thwarting the apocalyptic schemes of a mad sorceress who just happens to be her own mother. I was taken with the idea of beginning the novel at the point at which most fantasy narratives would have ended. But "Among Others" suffers from the pervasive smugness of narratives written for an insular audience. Morwenna, the narrator, is always right, from her judgments of science fiction novels (most of the narrative recounts her efforts to find community with fellow fans) to the fully-formed 21st-century liberal attitudes toward sex and race that she holds despite having been raised in a rural backwater during the 1970s. Anyone she instinctively distrusts turns out to be malevolent, and her skeptical attitude towards values and ideas different from her own is invariably confirmed. A coming-of-age story in which the main character doesn't really change is a story that saps all the meaning out of growing up. Okay, I did actually finish this one, and that's the problem. Zafón, best known for the international bestseller "The Shadow of the Wind," writes Dumas-like adventure yarns with a bibliophilic bent set in mid-20th-century Barcelona. "The Prisoner of Heaven," while not as grand or vigorous as "The Shadow of the Wind," has far more snap than that novel's anemic sequel, "The Angel's Game." However, having set up an appropriately sinister and powerful villain, Zafón simply stops the book at a random point, leaving nearly every major element of the plot unresolved. Who knows, this could be a respectably entertaining novel when it's finally finished, but please don't bother me with it until it's done. Don't get me wrong: I understand the appeal of this, a surprise success among nonfiction titles published this year. As an unrepentant homebody who has spent at least 50 percent of her life alone with her nose in a book, I have a keen appreciation of the solitary people and pleasures Cain extols. But I -- unlike, apparently, many, many "Quiet" enthusiasts -- have never felt the need for an entire book justifying my preferences. When you're a book critic, everybody thinks it only right that you should spend all of your time alone in a room. No doubt Cain has provided much validation to readers whose introversion comes in for frequent criticism by family, friends or colleagues, as well as facts about the accomplishments of introverts to fling in the face of such critics. But not needing either, I didn't find the book particularly scintillating or well-written. Anyone can be interested in a book they perceive to be about themselves and how wonderful they are. To my mind, the true sign of a great work of nonfiction is its uselessness; it should enthrall even when it has no practical application or even relevance to one's own life and problems.