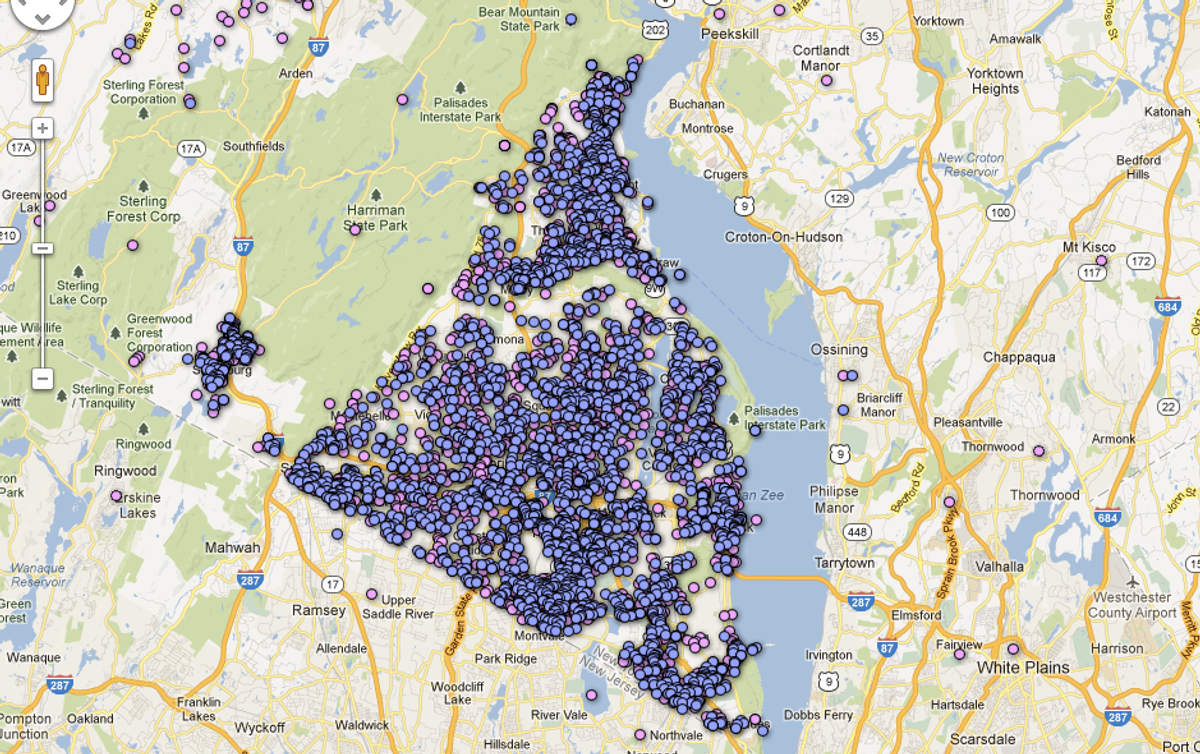 A New York newspaper, The Journal News, sparked outrage among conservatives earlier this week when it posted an interactive feature showing the addresses and names of individuals who hold gun permits in New York's Westchester and Rockland counties (screenshot above). The paper notes that "the data does not include owners of long guns — rifles or shotguns — which can be purchased without a permit. Being included in this map does not mean the individual at a specific location owns a weapon, just that they are licensed to do so."

The Journal News submitted requests for records "for all permit categories," citing the Freedom of Information Act, as part of a larger feature aimed at reexamining the area's gun ownership in the wake of the Newtown, Conn., shootings.

One blogger has responded, however, by turning the tables on 50 journalists at The Journal News. The Daily Dot reported today that Christopher Fountain has posted information on his blog that includes "the home addresses and phone numbers of visual editor Robert Rodriguez, reporter Dwight Worley, and editor Cynthia Royle." Fountain also posted "photos of [Royle's] family and car," saying:

"Targeting gun owners by publishing their home addresses is pretty dangerous," Fountain blogged. "[E]ither thieves will focus on them and put the guns into circulation on the street or they’ll hit the neighbors who are not identified as gun owners, figuring they’re a safer target but either way. It’s dangerously risky for this publisher to collect that information and make it accessible with just one click."

“We knew publication of the database [as well as the accompanying article providing context] would be controversial, but we felt sharing information about gun permits in our area was important in the aftermath of the Newtown shootings”

Fountain, however, still disagrees. He defended his actions on CNN's "Early Start" this morning, saying:

“Well, I just thought they were being hypocrites. In the aftermath of Newtown, it was obviously one tragedy, but somehow they were conflating legal gun owners with some crazed tormented devil up in Newtown and putting the two together. And I was offended by that and I wondered how they would like it if their addresses were published.”

In response to Hasson, he said:

“Well, she could have just published the number of gun permits, which is actually quite small, if she wanted to show an issue that there are 2,000 legally registered guns in her county, fine,” he said. “But the fact that they put the addresses — I’ve received e-mails from abused women who were under protective order and in hiding and they’re terribly afraid that now their names and addresses are all over the Internet and accessible through that map.”