With the debt ceiling and fiscal cliff now looming, both sides stick to their talking points 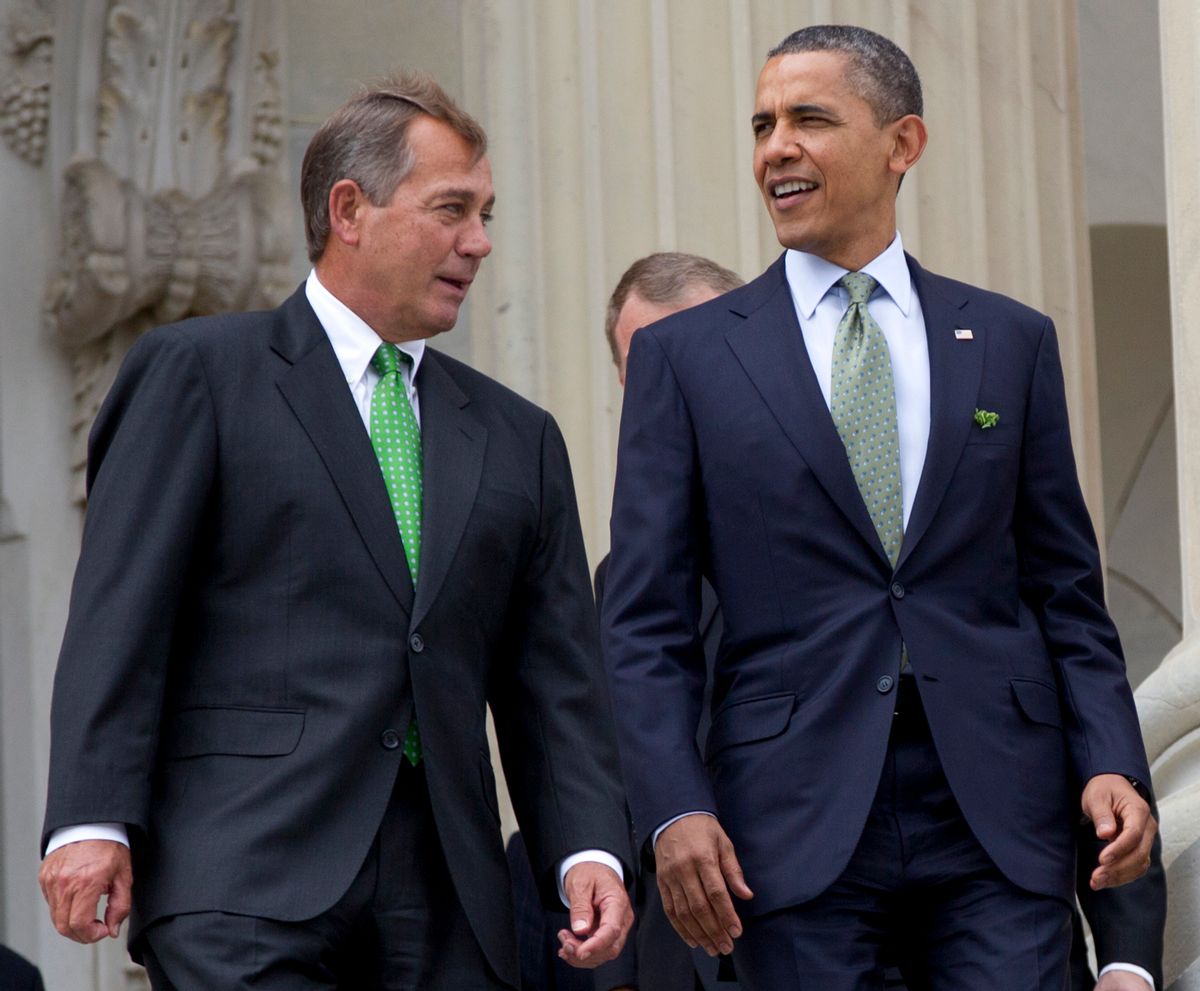 When it comes to the nation's budget challenges, congressional leaders are fond of saying dismissively they don't want to kick the can down the road.

But now, a deadline hard ahead, even derided half-measures are uncertain as President Barack Obama and lawmakers struggle to avert across-the-board tax increases and spending cuts that comprise an economy-threatening fiscal cliff.

Congressional officials said Wednesday they knew of no significant strides toward a compromise over a long Christmas weekend, and no negotiations have been set.

After conferring on a conference call, House Republican leaders said they remain ready for talks, urged the Senate to consider a House-passed bill that extends all existing tax cuts, but gave no hint they intend to call lawmakers back into session unless the Senate first passes legislation.

"The lines of communication remain open, and we will continue to work with our colleagues to avert the largest tax hike in American history, and to address the underlying problem, which is spending," the leadership said in a statement.

A short while later Senate Majority Leader Harry Reid, D-Nev. countered that the House leadership should allow action on a Senate-passed bill that lets income tax rates rise only on incomes above $200,000 for individuals and $250,000 for couples. The measure could "pass tomorrow" if put to a vote, he said.

The Senate is due in session Thursday, although the immediate agenda includes legislation setting the rules for government surveillance of suspected spies and terrorists abroad, including Americans, as well as a measure providing $60 billion for victims of Superstorm Sandy.

Obama decided to cut short his Hawaii vacation for an overnight flight expected to get him back to the White House on Thursday.

Apart from the cliff, other financial challenges loom for divided government, where political brinkmanship has become the norm. The Treasury disclosed during the day it would take accounting measures to avoid reaching the government's borrowing limit of $16.4 trillion by year's end. The changes will provide about two months of additional leeway.

Separately, spending authority for much of the government will expire on March 27, 2013.

After weeks of negotiations, the president urged lawmakers late last week to scale back their ambitions for avoiding the fiscal cliff and send him legislation preventing tax cuts on all but the highest-earning Americans and extending unemployment benefits for the long-term jobless. Longer, term, he said he still supports deficit cuts that were key to the earlier talks.

"Everybody's got to give a little bit in a sensible way," he said at the White House.

The House has no plans to convene, following last week's rebellion in which conservatives torpedoed Speaker John Boehner's legislation to prevent scheduled tax increases on most, while letting them take effect on million-dollar wage earners.

"How we get there, God only knows," the Ohio Republican said of efforts to protect the economy - and taxpayers - from the tax increases and spending cuts.

"Now is the time to show leadership, not kick the can down the road," Senate Majority Leader Harry Reid, D-Nev., said a little over a week ago after Boehner announced he would shift his own focus from bipartisan talks to the approach that eventually was torpedoed by his own rank and file.

It's a phrase that political leaders use when they want to suggest others want to avoid tackling major problems, and one that Boehner, House Majority Leader Eric Cantor of Virginia and even Obama as well as Reid have used.

"We have a spending problem. We have to address it, And we're not going to address it by kicking the can down the road," the speaker said at a news conference late last week when he was asked about setting a vote on a plan that Democrats find acceptable.

Cantor recently used the same approach in challenging Obama to agree to savings from Medicare and other benefit programs. "This has to be a part of this agreement or else we just continue to dig the hole deeper, asking folks to allow us to kick the can down the road further and that we don't want to do," he said on Nov. 28.

In fact, it's a phrase that has been in use for over a year as Obama and Republicans jockey for position on pocketbook issues.

In July 2011, when he was struggling with Republicans over the threat of a first-ever government default, Obama said he had "heard reports that there may be some in Congress who want to do just enough to make sure that America avoids defaulting on our debt in the short term. But then wants to kick the can down the road when it comes to solving the larger problem, our deficit."

A few months later, an extension of a payroll tax cut was the issue, and Boehner was insisting on a year-long renewal rather than the temporary plan that passed the Senate with votes from lawmakers in both parties.

"The American people are tired of that."

At issue now is series of tax increases and spending cuts scheduled to kick in with the new year that economists caution could send the economy into a recession.