We hit the debt ceiling Monday

With a surprise announcement on the debt ceiling, the landscape has shifted dramatically on the fiscal cliff 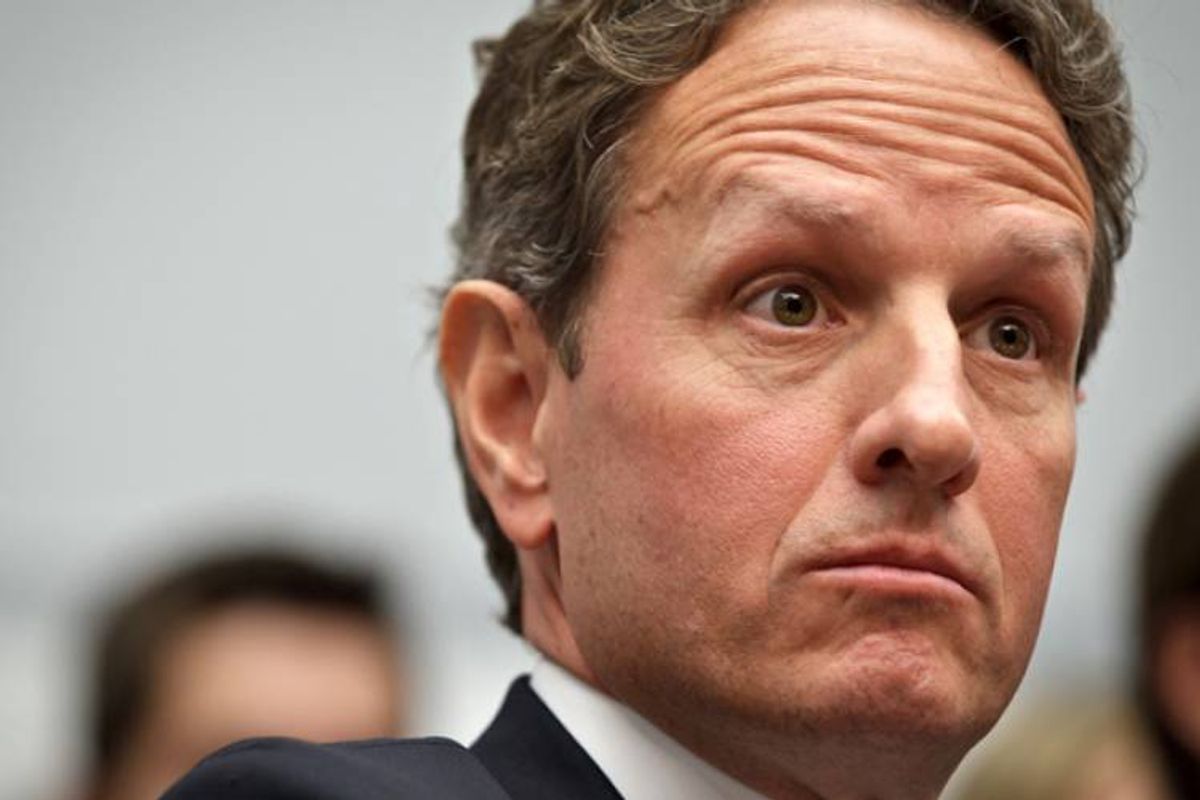 With just five days until we barrel over the fiscal cliff, the administration just deepened the metaphorical ravine by announcing this afternoon that the U.S. will hit the debt limit on December 31st, conveniently the same the day that a slew of tax cuts expire and a series of crippling spending cuts go into effect.

In a letter to congressional leaders, Treasury Secretary Tim Geithner warned that the U.S. will hit the statutory borrowing limit on Monday, but his department will be able to stave off default by engaging in “extraordinary measures" to fund the government and pay off the debt for a brief period of time. Geithner said he could find about $200 billion in “headroom,” which would last about two months under “normal circumstances.” “However, given the significant uncertainty that now exists” with the fiscal cliff, he continued, “it is not possible to predict the effective duration of these measures.”

The news comes as a huge surprise, as the administration had previously been warning that we would hit the debt ceiling at the end of January or in early February. Meanwhile, House Speaker John Boehner, just a few moments before Geithner’s letter, said the House will do nothing until the Senate has taken up his bills.

Here are a few ways to read these tandem pieces of big news after an otherwise quiet holiday weekend:

1) The administration is ramping up the pressure on Congress: President Obama announced yesterday that he was cutting his Christmas vacation in Hawaii short to return to Washington to deal with the fiscal cliff, and is expected to arrive later tonight. There’s some wiggle room in how Treasury calculates when it hits the debt limit, and it’s hard to see the timing of Geithner’s letter (coinciding with Obama’s return) along with the timing of when it projects us to bump up against the ceiling (coinciding with the fiscal cliff) and not wonder if the administration is playing hardball with House Republicans by strategically picking this timeframe.

While Republicans have been only mildly harmed by taking the fiscal cliff hostage, taking the debt ceiling hostage last year proved to be a disaster for them as business leaders and the media turned on the party for risking the full faith and credit of the federal government and the global economy in the process. When Standard & Poor's downgraded U.S. debt, it cited Republican intransigence on tax hikes as one of the key reasons. This fundamentally changes the political calculus for Boehner and House Republicans and suggests Obama has no interest in going over the cliff.

2) This makes a deal more likely: Republicans tried to pass their “Plan B” before leaving for Christmas, but failed when they couldn’t get enough Republican votes. That means a return to Plan A -- working with Obama. Boehner will lose some hardcore House Republicans, but they can easily be replaced with Democratic votes if Obama and Nancy Pelosi sign off on a deal. Facing down the additional threat of the debt ceiling, Boehner may take the generous offer Obama laid on the table before the holiday and quickly agree to a deal.

Meanwhile, conservative Republicans won’t have very much time to organize a rearguard effort to oppose the debt ceiling increase -- another possible reason for the delayed announcement from Treasury.

3) Obama wants one deal to do two things: Since the election, the White House has been insisting that any deal to avert the fiscal cliff come with a deal to raise the debt ceiling enough to avoid another standoff like the one in the summer of 2011, or the one going on right now. Republicans have so far objected at every turn, recognizing that their only “leverage” is with the debt ceiling, since they’ve already lost on the tax issue. That's why there hasn't been much discussion thus far on the debt ceiling in fiscal cliff debates.

4) We’re screwed: Many observers predicted we’d be going over the cliff, at least for a bit, before Christmas, and this doesn’t really change that; it only makes the consequences worse. In the case of both the cliff and the ceiling, neither will have a major effect immediately and will take some time to harm the economy, but if Congress continues to be deadlocked, the consequences are real.

The action will now turn to the Senate, where a Democratic aide pointed out to Salon in response to the news that the chamber has already passed an extension of the Bush tax cuts for all but those making more than $250,000 a year, and already Boehner’s offer. In other words, both houses are waiting on the other to act, at least for the moment.