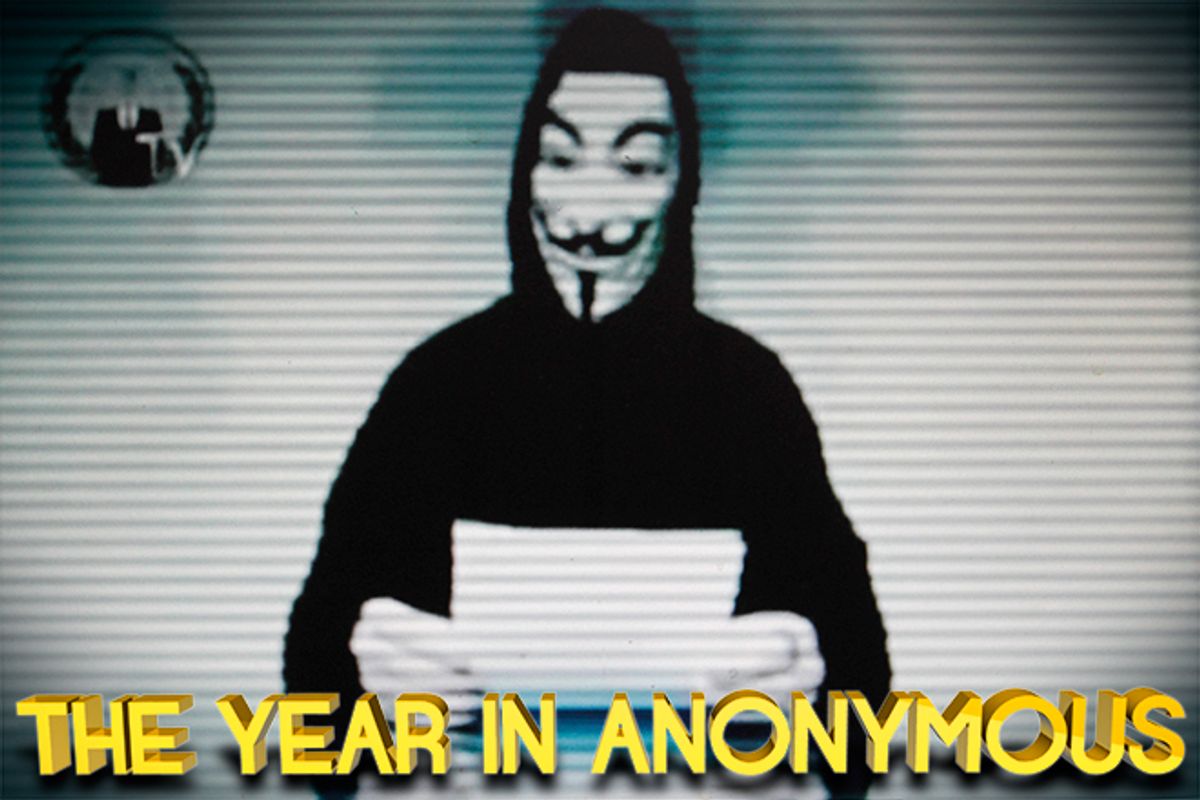 Perhaps no tech story was bigger this year than the growth of the crusading hacker collective Anonymous. In a Best of 2012 package, Andrew Leonard considers the group's mission and popularity. Natasha Lennard discusses the group's biggest successes of 2012 with a member. And a slide show looks back at 20 of Anonymous' most attention-grabbing efforts.

The comment, written by a teenage boy at Berkeley High School a few days after the Sandy Hook shootings, came in response to a Facebook post made by my own 15-year-old son.

My son was passing along the word that the hacker collective Anonymous had declared war against the Westboro Baptist Church, that clan of deranged religious fanatics who routinely seek to turn the misery of others into their own grandstanding opportunity.

Outraged at WBC's plans to protest at the funeral of Sandy Hook Elementary's principal, Dawn Hochsprung, on Dec. 19, in order "to sing praise to God for the glory of his work in executing his judgment," Anonymous proceeded to expose the personal information of WBC members -- home and email addresses, phone numbers, etc. -- and started acting as a coordinating center for anti-WBC counter-protests. For teenage boys at Berkeley High, Anonymous' direct action was the epitome of cool.

But the next morning, as WBC members and counter-protesters gathered in Newtown, Conn., and Anonymous-affiliated chat rooms buzzed with discussion of "#opWestboro" and "#opWBC," Twitter dropped a bombshell. The social media network suspended the largest Anonymous Twitter account, @YourAnonNews.

Never mind WBC's heinous plans! Here was another opportunity for outrage! Censorship -- a sin that galvanizes Anonymous like no other. A backup Anonymous account that had been prepared for exactly this kind of dire eventuality sprung into action and solemnly intoned: "Free Speech is Dead." The hundreds of thousands of people who followed @YourAnonNews salivated for a new showdown, anticipating an imminent clash in which the awesome might of Anonymous would hurl itself against Twitter's infrastructure. Shit was about to get real.

Except, less than an hour later, Free Speech was Alive. Anonymous, according to Twitter, had run afoul of Twitter's ban on posting personally identifying information about other people. But after @YourAnonNews applied for reinstatement, Twitter relented. Never mind! Nothing to see here. Back to Newtown we go.

Was the morning's drama an instance of one of the world's mightiest social media networks knuckling before the power of the hactivist collective? Maybe. A tempest in a teapot? More likely. Kind of hilarious in all its digital sturm und drang? Definitely. Fantastic publicity for Anonymous' goal of shaming the Westboro Baptist Church? Absolutely, positively.

As with all of Anon's actions, whether those be online rallies against overly harsh copyright laws or denial-of-service attacks designed to crash websites deemed the enemy for whatever reason, or straightforward gestures of organizational support for on-the-street actions like the Occupy protests, it's always a little hard to tell exactly what, in the end, Anonymous achieved with #opWBC, just as it is always tricky to define what Anonymous actually is. Digital freedom fighters? Subversive delinquents? Run-amok pranksters?

None of the above or all of the above, depending on who you talk to. And that might be how it should be. Anonymous prides itself on its inchoate lack of definition. But underneath all the confusion, there's still something definitely there. Otherwise, there wouldn't be anything to merit that teenage declaration of love on Facebook. Particularly for the young, the generation that cut its teeth on the digital frontier and increasingly gets its news from nontraditional sources, Anonymous is the conscience of the Internet; doughty defenders of free speech and privacy in an era when the surveillance state has never been more powerful. So in that sense #opWBC, regardless of its success or failure, provided a sweet coda to a tempestuous year. The Westboro Baptist Church might be an easy target, but when Anonymous lined up against it, it reminded us why the hacker collective, even if it might be hard to define, is still easy to celebrate.

Anonymous accompanied its announcement of hostilities against the Westboro Baptist Church with a slick, ominous video, featuring a computer-generated voice laying out the case for action.

Your pseudo-faith is abhorrent, and your leaders, repugnant. Your impact and cause is hazardous to the lives of millions and you fail to see the wrong in promoting the deaths of innocent people. You are self-appointed servants of God who rewrite the words of His sacred scripture to adhere to your prejudice. Your hatred supersedes your faith, and you use faith to promote your hatred...

From the time you have received this message, our attack protocol has past been executed and your downfall is underway. Do not attempt to delude yourselves into thinking you can escape our reach, for we are everywhere, and all-seeing, in the same sense as God. We are a body of individuals who fight for a purpose higher than self, and seek to bring the malevolent intent of the malefactors to light.

Personally, I have to say, if I were a 15-year-old boy, Anonymous would be knocking my socks off with that kind of badass propaganda. But I'm not; I'm a 50-year-old guy, and while I won't defer to anyone in my hatred of WBC, Anonymous' response seemed overwrought and grandiose. "All-seeing, in the same sense as God"? Please. Such rhetoric is more appropriate for the villain in a Chris Nolan Batman movie than for the real world, here and now. Likewise, a comment made by one Anonymous sympathizer during the brief window in which @YourAnonNews was suspended that "Suspending News-Accounts is like killing Journalists (like in Mexico) for telling the Truth," is just dumb. A Twitter suspension is not a murder.

But when the topic is Anonymous, it's probably always a good idea to restrain one's tendency to make totalizing judgments. It is in the nature of Anonymous that the video in question could just as easily have been the product of single person hopped up on Red Bull-fueled delusions of grandeur, instead of a carefully considered representation of the collective hacktivist will. In Anonymous, everyone gets the chance to write their own manifesto. The more, the merrier.

One thing's for sure -- the video was an artifact designed to be shared, hither and yon, and if you hadn't already heard of Westboro Baptist Church, the video would be certain to pique your interest. My son doesn't read the newspaper, and we'd never discussed Westboro at the dinner table. But he still found out. I blame Anonymous. No, wait, I salute Anonymous.

Gabriella Coleman, an expert in hacker culture, is writing a book about Anonymous. She told me that one of the most fruitful ways to think about Anonymous is simply as a vehicle for getting the word out.

"One of the things that is interesting about them," said Coleman, "is that they have shown the world what large-scale protest politics online looks like. But in the end, I think their strength is publicity."

In 2012 alone, Coleman said, Anonymous had played a significant role in publicizing the Stop Online Privacy Act (SOPA) in the U.S., the Anti-Counterfeiting Trade Agreement (ACTA) and the government crackdown on the MegaUpload file-sharing site. The denial-of-service attacks that temporarily shut down government or corporate websites shouldn't necessarily be seen as acts of vandalism that break things, suggested Coleman, but rather as stunts designed to get the world thinking, hey, there might be something weird and wrong, as in the case of MegaUpload, about the spectacle of a government shutting down a major website before a court has found anyone guilty of a crime.

In 2012, Coleman wrote earlier this year, Anonymous "began to be portrayed as an open-source brand of radical protest politics and not necessarily as hooligans hell-bent on unleashing extremist, chaotic acts... Anonymous is a distinct, emerging part of this diverse and burgeoning political landscape. Its real threat may lie not so much in its ability to organize cyberattacks but in the way it has become a beacon, a unified front against censorship and surveillance.

What's not to love? Go get 'em, Anonymous.