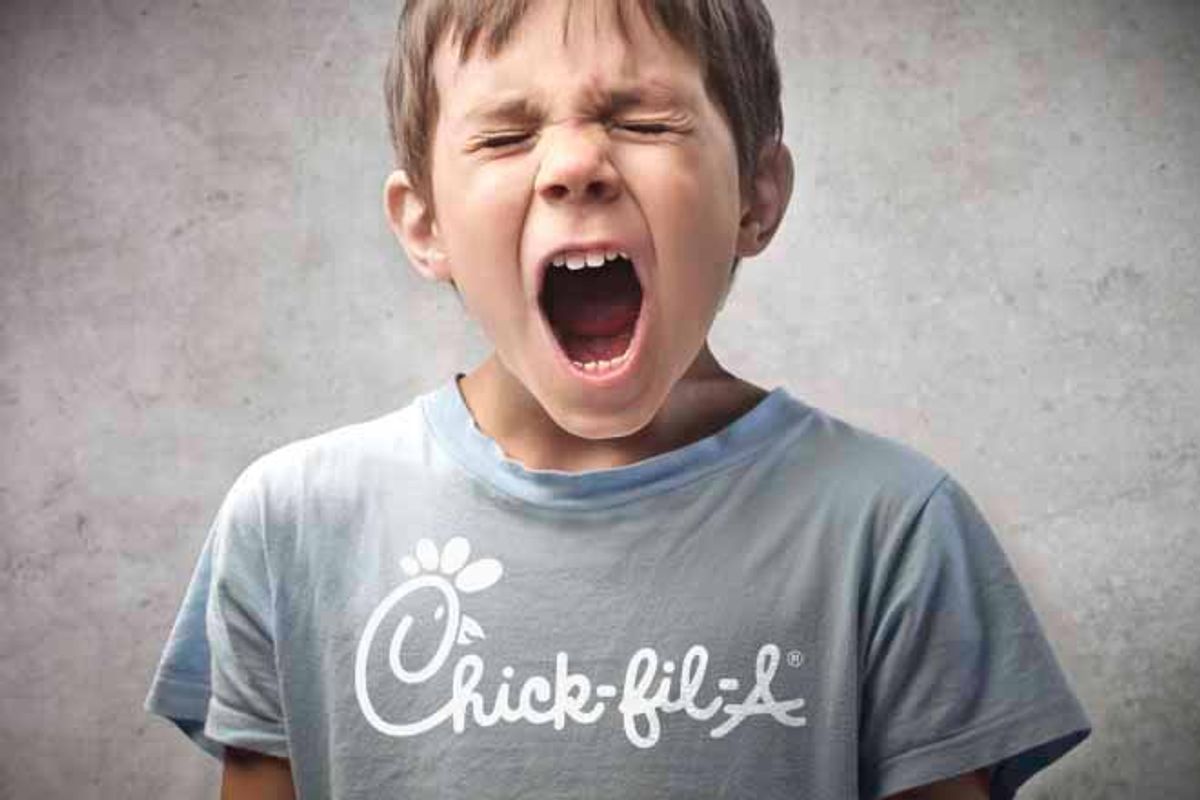 As my son enters the so-called Terrible Twos, I've become keenly aware of one thing that makes them so terrible: awareness. After 24 months outside the womb, kids slowly but surely start becoming cognizant of what they have, what they don't have -- and what they want. At this point, too, kids begin more fully processing how the world works -- or at least what the world is telling them about how the world works.

Advertisers obviously know all of this. They not only know that kids will go full-on terrible in annoying their parents into buying stuff they realize they want, but also that two-year-olds are already starting to develop their own future preferences. Hence, when my son hears the discrete piano tune and Ed Harris' soothing voice on the radio and then cheerily shouts "Home Depot," it is a sign that he is already equating home projects with the local-business-crushing orange Godzilla -- just as that Godzilla's marketing team hopes. Same thing for the Happy Meal, whose child-focused marketing equates junk food with emotive joy and cheap toys -- a terrible-yet-irresistible combination for a two-year-old.

From a marketing perspective, the formula is straightforward. Essentially, today's Mad Men take advantage of the awareness that comes with the Terrible Twos by advertising directly to two-year-olds (or at least, as with the Home Depot, by making their jingles mentally "sticky" for both adults and children). That not only exacerbates the Terrible Twos by manufacturing/inflaming product desires, it also -- by design -- solidifies kids' future consumer assumptions.

This latter objective is arguably the more insidious and dangerous of the pair, as evidenced by my experience with my son's new favorite book -- Chick-fil-A's re-release of "The Jolly Barnyard."

How this fast-food branded book got into our house, I have no idea -- we are vegetarians and have never set foot in a Chick-fil-A either before or after CEO Dan Cathy's grotesque comments about equal rights. But somehow -- maybe it was a gift? -- this book is here, with Cathy's mug smiling at me and my son from the first page on the nights we read it. Which, lately, has been every night.

It's been that way because my son loves the book, and I'm too much of a pushover to say "no." I'm also thankful that he wants to read anything, so I go ahead and read it to him.

All of that, no doubt, is part of the calculus behind Chick-fil-A's sponsorship of the book in the first place. They know parents will have trouble rejecting a stealth ad campaign -- even one that brands the fast-food conglomerate to happy themes and bucolic images that are the opposite of what the sponsoring conglomerate embodies.

Such is the evil genius of wrapping "The Jolly Barnyard" in a Chick-fil-A label -- that is, in a label of a company that is the antithesis of the farm in the book.

This is not an overstatement. Chick-fil-A, like most fast-food companies, is the retail expression of the factory farming industry -- an industry whose hideous treatment of animals, vertical integration and rooting in monoculture is the opposite of the diversified family farm so beautifully glorified in "The Jolly Barnyard." Perhaps worse, as a primary buyer -- and, thus financial supporter -- of the factory-farmed products, Chick-fil-A is one of the major fast-food players responsible for the demise of "Jolly Barnyard"-esque family farms.

But rather than own up to its record with a children's book about its odious business model, Chick-Fil-A (not surprisingly) wants kids to think of it through a much more pleasant story.

In short, they don't want my son and his fellow two-year-olds to equate Chick-fil-A with what Chick-fil-A really is -- they want them to equate it with the very Jolly Barnyard it and its fellow fast-food behemoths have helped destroy. And so the company has re-published the 1950 classic under its name, and with its logo stamped right on the front cover. The message to tykes is clear: When you think Chick-fil-A, think "Jolly Barnyard."

Of course, Chick-fil-A's "Jolly Barnyard" is hardly the most egregious advertising ploy from the fast-food industry. It is certainly less a hard sell of a specific product than a soft pitch for a larger brand. But that subtlety, reflected in so many similar child-focused marketing schemes, reveals a sophisticated calculation that will almost certainly pervade my son's childhood even if (and when, I promise!) I get rid of the specific Chick-fil-A book in his room. That's because all sorts of companies -- whether through co-branded toys, books or educational material in schools -- are betting that kids' early cognition offers possibilities for both brand loyalty and brand redefinition. They are betting that there is no better time to wire the synapses of future consumers than when those consumers are first becoming aware of their world.

And here's the thing that haunts me as a parent: If a pillar of factory farming can try to convince my two-year-old son that it represents the ideals of family agriculture, what won't the Mad Men try to convince him to believe?