Exclusive: The infamous sheriff "gratefully accepted" an award from the Sons of Confederate Veterans last year 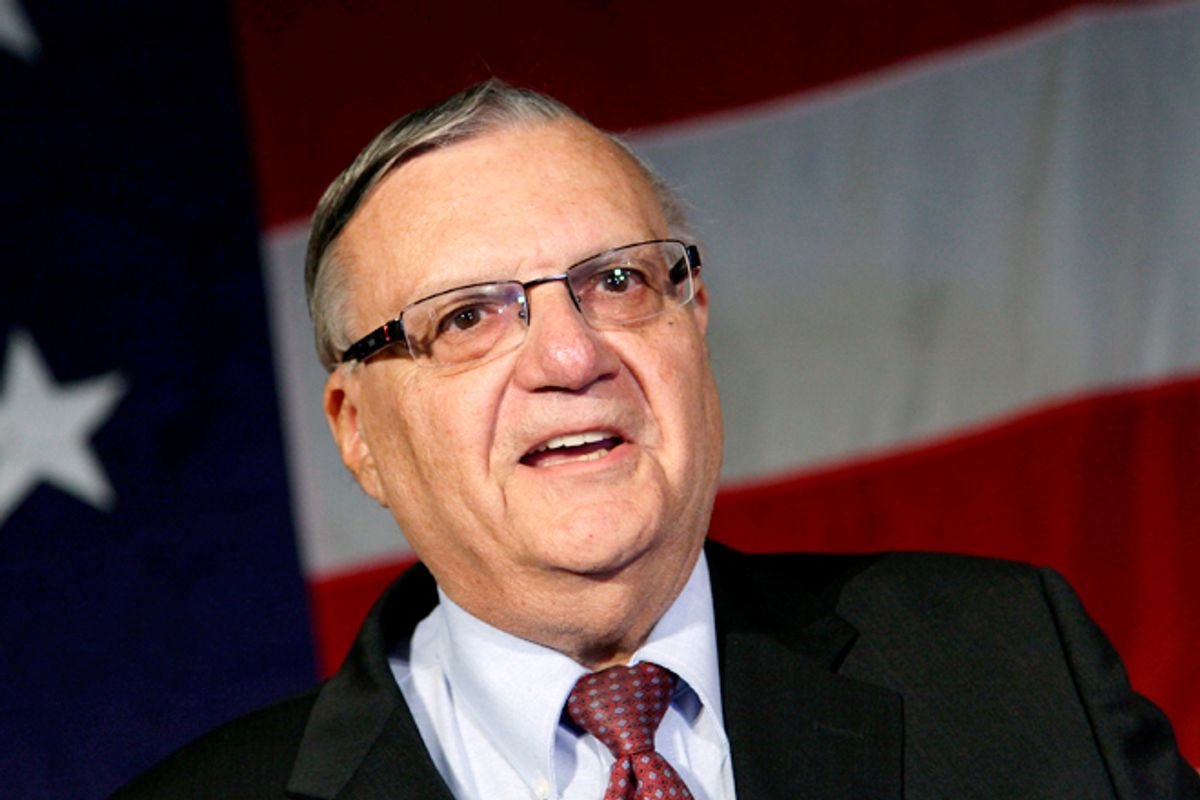 While Maricopa County, Arizona, Sheriff Joe Arpaio was denying allegations of racial profiling last year, he was accepting an award from The Sons of Confederate Veterans (SCV), a controversial Confederate heritage group.

Two officials with the Arizona SCV division presented the group’s J. Edgar Hoover Law & Order Award to Arpaio in his office in October of 2011. This has never been previously reported. “Sheriff Arpaio, a genial host (unless you’re in his jail!) gratefully accepted the award and, in return, gave Commander [Richard] Montgomery and Adjutant [Curt] Tipton some souvenirs of the visit, to include autographed posters, a photo and the infamous pink underwear!” according to the Fall issue of the official newsletter of the SCV’s Arizona Division, “The Rebel Yell.”

The newsletter of the Tucson “camp” adds that Arpaio autographed photos of the ceremony. Here’s a picture of Arpaio accepting the award from “Rebel Yell”: Also receiving the award that year, according to the newsletter: Paul Babeu, the politically ambitious sheriff of Arizona's Pinal County, who was featured prominently in a John McCain presidential ad in 2008, and came out as gay earlier this year.

The SCV calls itself a “heritage organization” focused on history, and is adamant that it does not promote racism or the reinstatement of the Confederacy. “Today, the Sons of Confederate Veterans is preserving the history and legacy of these heroes so that future generations can understand the motives that animated the Southern Cause,” the group’s website states.

At the bottom of the Arizona division’s website, below the three Confederate flags, there is an image of a KKK hood with a red line striking through it, as in a “no smoking” sign. “The Arizona Division...denounces any and all groups whose objective is to promote hate and discrimination based upon race, religion, ethnicity, gender or national origin,” a disclaimer next to the image adds.

Still, the group has been criticized by organizations like the Southern Poverty Law Center for ties to extremist activists and for promoting a narrative that overlooks the Confederacy’s sins (especially slavery).

The group wasn’t always so controversial. Bill Clinton commended the SCV’s preservation of history, while it protested against Ku Klux Klan rallies in the past, not wanting the confederate symbolism emblazoned across its work associated with the hate group. But in the early 2000s, SCV had its own civil war in which more radical activists seized control of the group and ousted the traditionalist establishment. While the old guard wanted to keep the group focused on preserving headstones and monuments of Confederate soldiers, the more radical wing was committed to advancing the “Lost Cause” narrative of the Civil War and is allegedly motivated by racial resentment, according to the Southern Poverty Law Center.

The former number two leader of the group, Anthony Hodges, who was purged in the coup, emailed colleagues warning that the group was moving "towards a more politically active, secessionist and racist agenda." There was an "exodus" of respected lifelong SCV members, Hodges added. Most of the “intolerance and ignorance” called out on the national organization’s blog now seems to be about the removal of confederate statues.

Edward H. Sebesta, who researches the neo-Confederate movement and has edited several books on the subject, passed along the newsletters to Salon. “The SCV has an interesting history of white supremacy which continues to this day,” he said, noting that magazines published by the group have advocated against immigration and Muslims, and argued that blacks have lower IQs. Sebesta is now working to establish an Anti-Neo-Confederate Institute.

A spokesperson for Arpaio did not return numerous requests for comment.

Laura Copple, the Chair of the Maricopa County Democratic Party, said the award is troubling. "Arpaio's relationships with organizations such as the Sons of Confederate Veterans and Minute Men, as well as individuals like neo-Nazi and spree killer J.T. Ready, continue to spotlight Arpaio's failure to provide equal justice for our diverse community. Maricopa County deserves professional and trustworthy law enforcement from [the Maricopa County Sheriff's Office]," she told Salon.