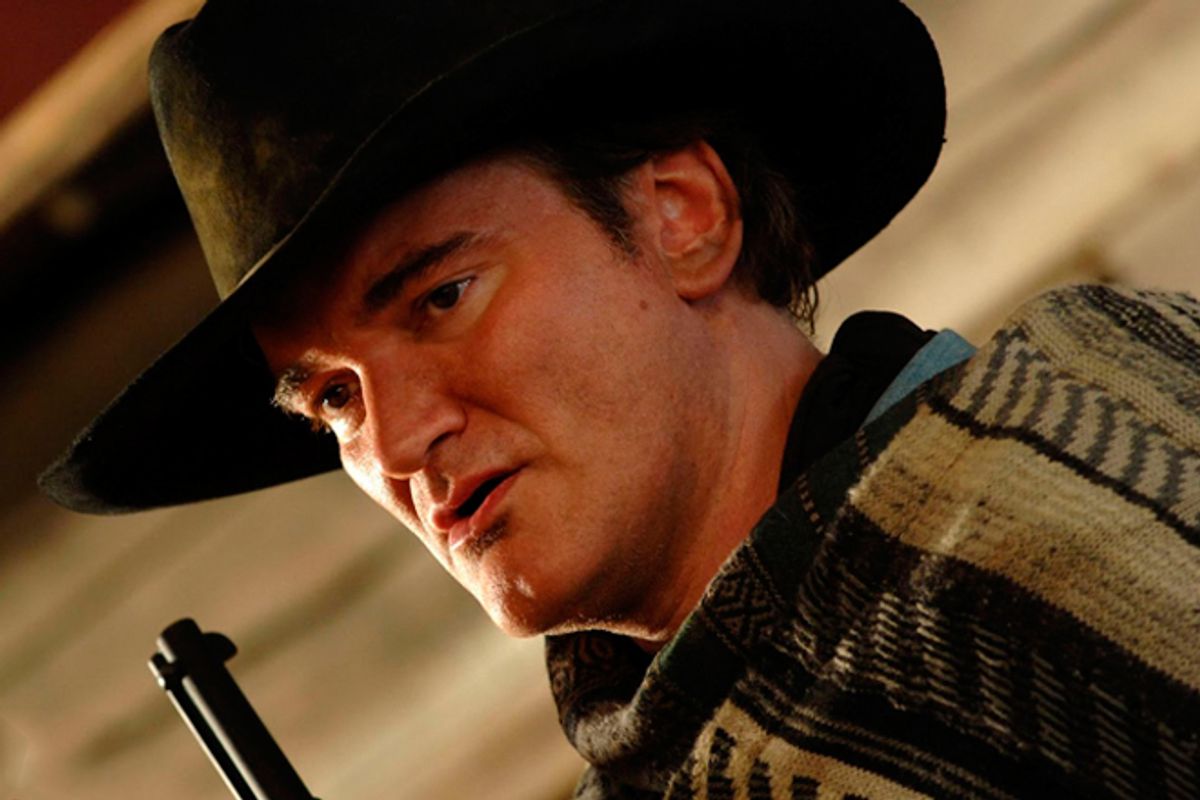 There are some folks who won’t like to read these words: White guy superstar director Quentin Tarantino may be the baddest black filmmaker working in big-time Hollywood movies today.

That is a possibility which angers some, frightens others and disgusts a few more, saying as much or more about the sorry state of movie audiences today and the still-closed world of big-time filmmaking than any tart provocation Tarantino has managed to splash on the screen.

The reason we’re having this conversation — again — is thanks to the latest addictive confection of revenge film, spaghetti Western, Blaxploitation movie and anti-slavery fantasy Q.T. dropped on us all to close out 2012: "Django Unchained."

Beyond the fact that it is gleefully bloody, luxuriating in crimson-splattered shootouts at a time when America is deeply conflicted over how much it loves this stuff, "Django Unchained" uncorks the perfect revenge fantasy for black people descended from slaves and living in a still-white-dominated society.

Never mind the n-words – and the term “nigger” is thrown around a lot in this film, just to shake up those who might miss how revolutionary it really is otherwise — Tarantino has created a black superhero in Jamie Foxx’s Django. He’s a freed slave who is good at killing callous white people, exacting vengeance for their specific folly of brutalizing him and his wife, but also living out the fantasy of being the one black man who couldn’t be dehumanized by slavery.

An African-American screenwriter friend of mine marveled at Tarantino’s accomplishment while at a "Django" screening with so few black people watching they could be counted on the fingers of one hand. This almost entirely white audience was laughing and cheering as a black man mowed down one white asshole after another, taking out men too venal, stupid or entitled to admit how much of their world was built on the blood and pain of black slaves.

Making white people cheer the death of white supremacy? To paraphrase a recent controversial monologue by the film’s star: How black is that?

But Quentin Tarantino isn’t black. And that is a fact which has stuck in the craw of many who look askance at this jittery, superstar film geek who has no problem putting the word “nigger” in the mouth of a character if it serves his purposes.

They suspect he has tapped powerful black actors such as Sam Jackson, Pam Grier and Ving Rhames to indulge his n-word fantasies, validating his excursions even as they play sordid characters: weapons dealers, drug mules, hitmen and drug kingpins.

They worry his considerable skill as a filmmaker is somehow being used to profit by degrading black people in the guise of spotlighting them, like a white grocer who profits by peddling week-old produce in a black neighborhood with no other stores.

These aren’t unreasonable fears. But some Tarantino critics – particularly longtime foe Spike Lee, who pronounced "Django Unchained" “disrespectful to my ancestors” without ever seeing it – seem to hate Tarantino for reasons that reach beyond these simpler themes.

As with Paul Simon’s adventures into South African music with his classic "Graceland" album, Tarantino attracts outrage in part because he is a white man who gets to do what black artists should also get to do.

Studios know white audiences will show up for his movies – especially, the twenty- and thirtysomething white males the advertising industry salivates over. So he gets to make "Jackie Brown," the homage to Blaxploitation movies John Singleton and Spike Lee never could — with the queen of the genre, Pam Grier, no less. (Of course, Singleton did get to make an update of "Shaft" with Samuel L. Jackson, proving the only thing he learned from Blaxploitation movies was to make sure the star was somebody audiences couldn’t stop watching, even if they wanted to.)

It’s like seeing the Rolling Stones make millions recutting Lightnin’ Hopkins and Muddy Waters records. You know their art is coming from a place of love and tribute, but it sucks that white audiences will show up for the Xerox in bigger droves than they ever managed for the original.

I am a black man, a longtime arts critic and a stone Tarantino fan. But there are still times when his taste for politically incorrect dialogue pulls me up short. Like "Pulp Fiction’s" scene with Jimmy. Tarantino fans already know where this is headed: In "Pulp Fiction," Jackson’s Jheri-curled hit man Jules has been the film’s alpha-dog badass, until his partner Vincent Vega (a charmingly long-haired John Travolta) accidentally shoots a man in the back seat of their car, forcing Jules to turn to his pal, Jimmy, for help.

Q.T. plays Jimmy, presenting the guy as an exasperated nudnik, unimpressed by Jules’s badassery, hectoring him like he’s scolding a kid. “Did you notice a sign out in front of my house that said ‘Dead Nigger Storage?’” he asks Jules at one point. When Jackson’s Jules offers a sheepish no, Jimmy drops the punchline: “Because storing dead niggers ain’t my fucking business.”

I think I know why Tarantino went there. He seems to delight in scenes where the power dynamic shifts, and seeing Jules kowtow to this geeky white guy throws off the audience just enough that they really appreciate when the scene’s true alpha dog, a fixer called Mr. Wolf, shows up in a sportscar and businesslike attitude, courtesy of the legendary Harvey Keitel.

Tough to admit, but I laugh at Jimmy’s line every time I watch the film. Still, it felt a bit gratuitous; we already know this guy somehow has the power to make Jules fall in line – we didn’t really need to see him get smacked with the n-word to confirm it all.

That’s really all I ask: that a filmmaker prove, when deploying the n-word, that there’s a reason for going there that makes artistic sense. As much as Lee and others want to complain about how Tarantino’s characters sling around that epithet, most of the time, in most of his movies, it makes creative sense.

And look at the results. Playing Jules helped turn Jackson into Hollywood’s premiere shit-talker, from trading jibes with Bruce Willis in a "Die Hard" movie to keeping "The Avengers" in line as Nick Fury. "Jackie Brown" was the best role Grier had in years, and "Django" had more black actors in powerful parts than any recent film I’ve seen that didn’t have Tyler Perry’s name in the credits.

Tarantino’s black characters may be flawed, but they are also powerful, smart, human and effective without the approval or enabling of white characters, a rarity for big Hollywood films. That’s really why "The Help" went over with some black folks like a lead soufflé; the black victims in that story were saved by a white girl instead of saving themselves.

If anything, I would say Tarantino’s success means it is time for him to help more black filmmakers get to the hallowed place where he now resides.

Spike Lee has a tough enough time getting his own films made; time for Q.T. to bring more vibrant black storytellers to Hollywood the way he did with Wu-Tang Clan’s RZA, lending his name to the rapper’s kung-fu film homage, "The Man With the Iron Fists."

‘Cause it sure would be nice, someday, to see a black person become the baddest black filmmaker in big-time Hollywood.