Could a black director have made "Django"? 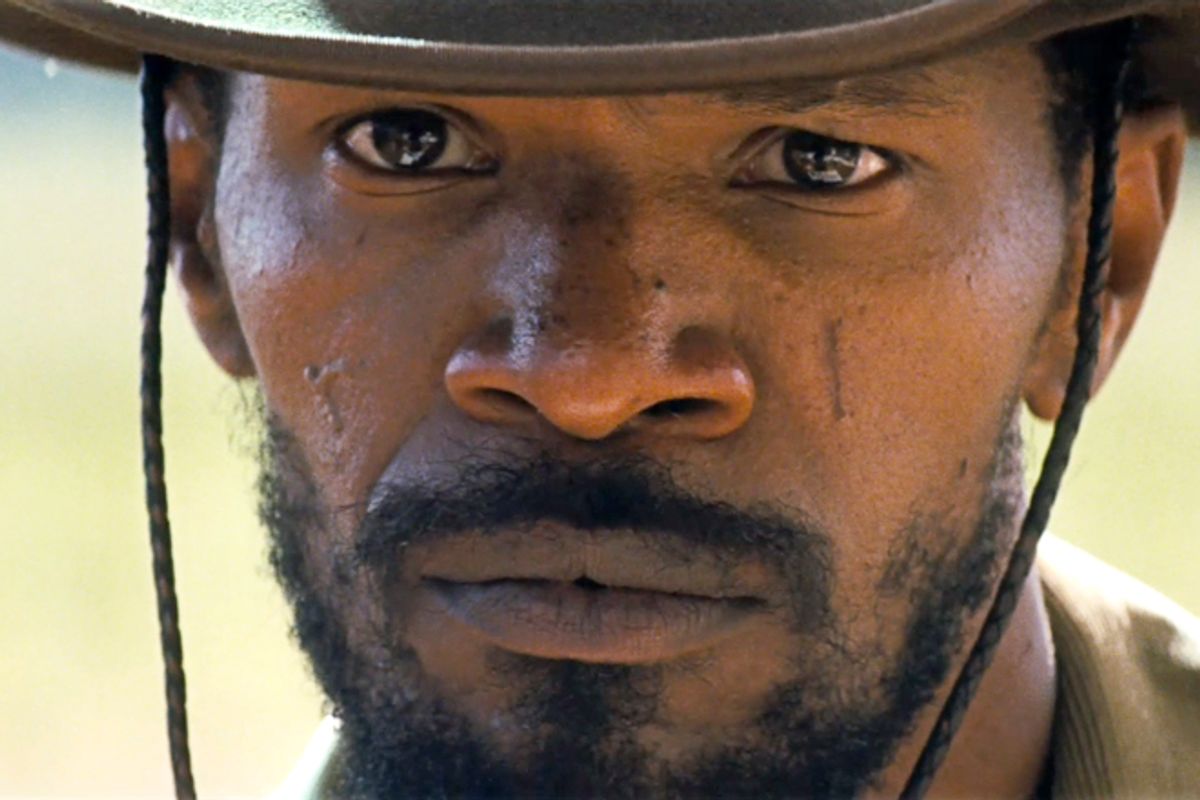 For two reasons, Quentin Tarantino’s "Django Unchained" was all but guaranteed to ignite a conversation about race in America.

First and foremost, the film dares to break a major taboo. Specifically, as the New York Times critic A.O. Scott put it, "Django" dares to show "regenerative violence visited by black against white instead of the reverse" -- a narrative that "has been almost literally unthinkable" in American life, much less in big-budget pop culture productions.

Second, the film does that in the immediate aftermath of a racially charged election that saw a black man reelected to the White House with the most diverse (read: non-white) coalition in presidential history.

Because of the content and timing, then, Tarantino’s masterpiece can be seen as a metaphorical exclamation point at the end of an historic year -- one that many Americans no doubt interpret as the political equivalent of Django’s triumph. Considering this, it’s hardly surprising that an American Right obsessed with promoting what I’ve called the White Victimization Narrative has utterly freaked out on the film. For different (and far more valid) reasons, it’s also not surprising that esteemed voices like director Spike Lee and University of Pennsylvania professor Salamishah Tillet have critiqued the film’s themes, raising important questions about its subtext.

This back and forth will likely continue, and whether you love or hate the film, that’s a good thing. In a nation that often ignores racism and asks too few questions, Tarantino has performed something of a civic service by using his considerable entertainment platform to effectively expose right-wing bigotry (as seen in conservatives' ugly reaction) and also help force serious racial questions into the national debate (as seen in some African Americans’ substantive critique).

And yet, in all the foment, one issue that’s been little discussed is how the film reflects the way White Privilege works. That's a particularly important topic right now, in light of the intense conservative backlash that now occurs after any mere mention of the concept.

Film critic Eric Deggans alluded to White Privilege in his terrific Salon piece on "Django Unchained" earlier this week. Noting that "studios know white audiences will show up for (Tarantino’s) movies," he concluded that Tarantino is "a white man who gets to do what black artists should also get to do" -- but too often do not get the opportunity to do. Why not? Because of the way films by different directors are inevitably portrayed in the media and interpreted by White America.

The best way to illustrate this form of White Privilege is to imagine "Django Unchained" being released as a production from an African American writer and director. Under those circumstances, in the media and among white audiences, the film most likely would be perceived not merely as a mass-audience entertainment product with some underlying social commentary by a single director, but as a niche political film allegedly from a whole community with an axe to grind. That is, it would probably be met in the media and among potential viewers not in the way it has been met, but instead as a divisive "black movie" -- by, and allegedly only for, black people.

Studio executives know all of this. In Deggans' terms, they "know white audiences will show up" for a white director’s film about race issues, but they fear white audiences will not show up for an African American director’s film about the same issues. Thus, when it comes to films dealing with racism, it’s probably harder for African American writers and directors than for their white counterparts to convince studios to finance their projects. That difference is the definition of White Privilege.

Noting all of this is not to assert that African American writers and directors have never found commercial success in films about bigotry, nor therefore to absolve film studios for any institutional racism. But it is to point out that White Privilege is not just about individual bigots and single industries. On the contrary, it operates on a mass level whereby America -- whether consciously or unconsciously, whether overtly or subtly, whether in movie tastes or other consumer proclivities - often privileges whites over people of color.

Pointing this out, mind you, isn’t to criticize Tarantino. Quite the opposite, in fact.

Tarantino, in my view, deserves credit not just for making a terrific film, but also for choosing to use his position to try to remind America of its hideous slave history and to therefore contribute to the cause of fighting racism (and I say that while also agreeing with some of the criticism of how his film addresses that cause). After all, at this point in his career, the guy is a fabulously wealthy entertainment industry mogul. That means he can select whatever kinds of projects he wants and that, hence, his choices are statements of commercial desires, creative interest and social values.

In the case of "Django Unchained" -- in Tarantino choosing, as Deggans says, to make a movie about "a black man mow(ing) down one white asshole after another, taking out men too venal, stupid or entitled to admit how much of their world was built on the blood and pain of black slaves" -- he proactively decided to use his White Privilege to televisually attack the ugliest roots of that privilege. That’s no small thing -- especially in a country where so many others in his very same position typically decide to do the opposite by promoting, perpetuating and defending White Privilege (see the political right’s reaction, above, as an example).

In that sense, Tarantino’s willingness to expend his Hollywood capital to make such a film implicitly implores white people to try to use their relative position of privilege to fight that privilege where they can. That’s a welcome -- if unstated -- message. While history (for instance, the civil rights movement or the 2012 election) certainly proves people of color don’t need "white saviors" to come to their "rescue" (another bigoted and paternalistic Hollywood trope), that truism doesn’t negate white people’s moral obligation to fight White Privilege where they see it -- even if that privilege is benefiting them personally.

Doing that, though, means being able to recognize White Privilege in the first place. In how "Django Unchained" reminds us of systemic double standards, it is certainly there to behold -- if we are willing to look.