’Twas the night before the fiscal cliff 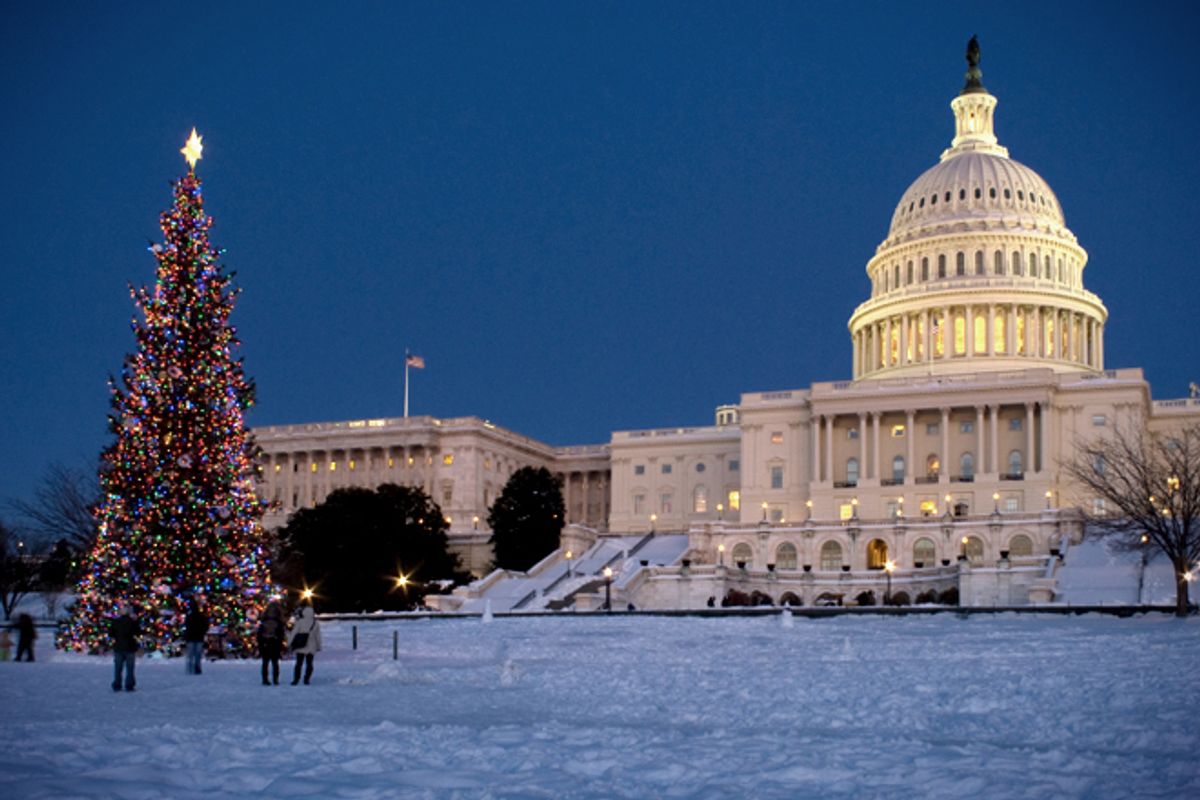 ’Twas the night before the fiscal cliff, and all through the Senate and House
Not a Republican was budging, not even an ounce.
Back from vacation the President came
In hopes that Republicans might now act sane.

The cowardly Democrats put it all on the table
Like cuts to the elderly, poor and disabled.
So Republicans, thinking their ploy was a score,
Figured why not hold out until Democrats cut more!

Even with taxes the lowest in years
Republican donors clung tight to their Lears.
If taxes were raised there would be hell to pay
And less money to beg for come re-election day.

Plus unlike Democrats, Republicans were clear
They wanted to drown government, and this was their year.
Never mind the election or the poll trackings
Democrats missed the message and their weak spines were cracking.

With one little press conference, lively and quick,
Obama pulled out the rug from under seniors like St. Nick.
And conservative Democrats are disgustingly jolly
Pretending that poor folks can live off of holly.

The idea we need cuts at all is plain nonsense
What Dems need in their stocking is strategy and conscience
And the courage to stand up to GOP threats
And stop giving them the scissors to cut our safety net to shreds.

Voters want to raise taxes for the rich — a no-brainer.
Hell, that fact is even now clear to John Boehner!
(But his party’s insane and it’s getting insaner.)
We need to raise taxes on the top 1%
To help unemployed folks pay for health care and rent.

I wish I could tell you Santa’s on his way
With 535 members of Congress pulling his sleigh
Then Santa glides into Washington past snowflakes and ices
To declare once and for all we have a revenue crisis!

But alas, boys and girls, that story’s not real
And Washington can’t tell its ass from its heel.
Republicans stand firm to make government drownably small.
And Democrats don’t stand for anything at all.

Oh Mitch McConnell, Paul Ryan and Grover Norquist,
If public opinion came with money, would you then not ignore us?
And oh, Chuck Schumer and oh, Harry Reid,
If we gave you a spine, would you actually lead?

Remember, kids, the fiscal cliff was created
By Republicans who are now clearly elated.
For Republicans are cheering, “We can do what we please!
Either way, government will be brought to its knees.”