India's culture of rape is endemic 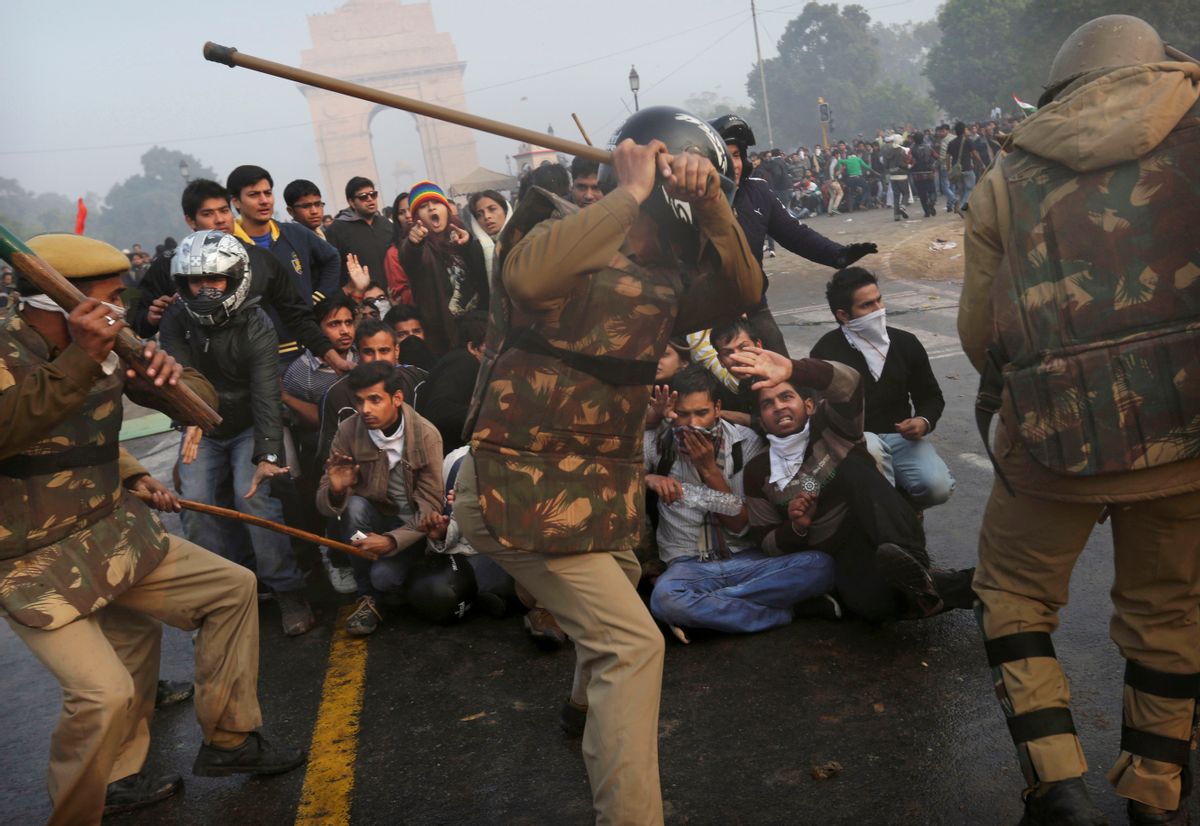 They blasted the Delhi police for incompetence and insensitivity. And they cried out for the death penalty for six men accused of brutally gang-raping a 23-year-old woman aboard a private bus on Dec. 16. The woman succumbed to her injuries on Friday in Singapore, where she was being treated at a hospital, according to media reports.

In the story of India's battle against sexual assault, the honorable members ignored one important footnote: Every major political party has fielded and continues to field candidates facing criminal charges for rape, harassment and other crimes against women.

“We found that all these parties had given tickets to people of dubious backgrounds, involved in crimes against women,” said Anil Bairwal, national coordinator of the watchdog group National Election Watch. “It's the highest order of hypocrisy.”

According to mandatory self-declarations filed by candidates with the Election Commission and tabulated by National Election Watch, India's leading political parties have offered tickets to 27 candidates accused of rape and a whopping 260 candidates facing charges for crimes against women ranging from assault to harassment over the past five years. As a result, two members of the current parliament and six members of the various state legislative assemblies are facing rape charges, while 36 others face charges for lesser crimes against women.

Not one of India's major parties is innocent of the charge, and by some measure the two largest, national parties, the Congress and the Bharatiya Janata Party (BJP) are the worst offenders, according to National Election Watch. While most of the rape accused hail from smaller parties, or from the regional Samajwadi Party and Bahujan Samaj Party, both based in Uttar Pradesh, 11 out of 36 legislators facing charges for crimes against women hail from the Congress and BJP. And out of the 260 candidates offered tickets despite facing such charges, the Congress and BJP account for 50.

Even amid the ongoing furor, Congress MP Abhijit Mukherjee, the son of President Pranab Mukherjee, was compelled to make a backhanded offer of resignation on Thursday after he made sexist remarks about women protesting India's failure to stop sexual assault. “If my party high command demands I will do that," he told a TV news channel.

And they're wondering why the people have taken to the streets.

The impact of that callousness goes far beyond discouraging women from bringing charges against their abusers, as it trickles down more readily than any economic growth. Between 2002 and 2010, as many as 45 women were raped by the police while in custody, according to the Asian Center for Human Rights — while Indian law, which requires prior sanction from the government before law enforcement personnel can be prosecuted, protected the officers responsible.

The same week as the Delhi gang rape, a woman in Uttar Pradesh claimed that a police officer who'd promised to help her prosecute her attacker had instead raped her himself.

A series of horrific stories, known in shorthand as “the Mathura case,” “the Rameezabee case” or “the Suman Rani” case, make it all too clear that Indian women are not safe from sexual assault in the country's police stations themselves. In the Mathura case, for instance, a 16-year-old girl was allegedly raped by two policemen in a Maharashtra police station while her unwitting parents waited patiently outside.

Where it comes to other security forces, such as the Indian army or paramilitary troops, the situation may be even worse. Women of Indian-administered Kashmir and Manipur — where the Armed Forces Special Powers Act grants the army untrammeled powers — have long complained that they are targeted for sexual assault. And in at least one notorious incident, at least 53 Kashmiri women were allegedly gang-raped by army personnel conducting interrogations related to the militant separatist struggle.

Protests against the decay of law and order and the callous treatment of victims of harassment and sexual assault continued this week in New Delhi, and across India. And though the protesters are now fewer in number, and have ceded contentious symbols such as India Gate and the house of the president to the police following a hamfisted crackdown over the weekend, the anger has not dissipated.

On Wednesday, for instance, a group of young women who had been part of protests at Jantar Mantar — a spot designated for expressions of civil disobedience — complained to the media that they had been detained and beaten up by the police the day before, according to the Times of India. (Police confirmed they had detained 17 women but denied they had been mistreated).

From a spontaneous outpouring of rage — mostly characterized by calls for castration or the death penalty for the rapists — the protests have increasingly turned against the political establishment. After police turned water cannons, tear gas and canes on protesters over the weekend, a tardy and inarticulate statement from Prime Minister Manmohan Singh was inadvertently sent to the media unedited, ending with him asking his minders, “Theek hai?” (“That OK?”).

The response, via Twitter and other social media, as well as the people shouting in the street, was a resounding "No."

But the anger is not so much directed at the Congress Party government currently responsible for law and order in the capital, as well as the nation. It's aimed at the corrupt, incompetent and hypocritical political class as a whole — exactly as it should be.

"People are being given a small space in Jantar Mantar that is barricaded on both sides,” a merchant seaman participating in the protest told the Times of India.

The trouble with that kind of hijacking, however, is it's almost certain to backfire.