Nobody likes a quitter 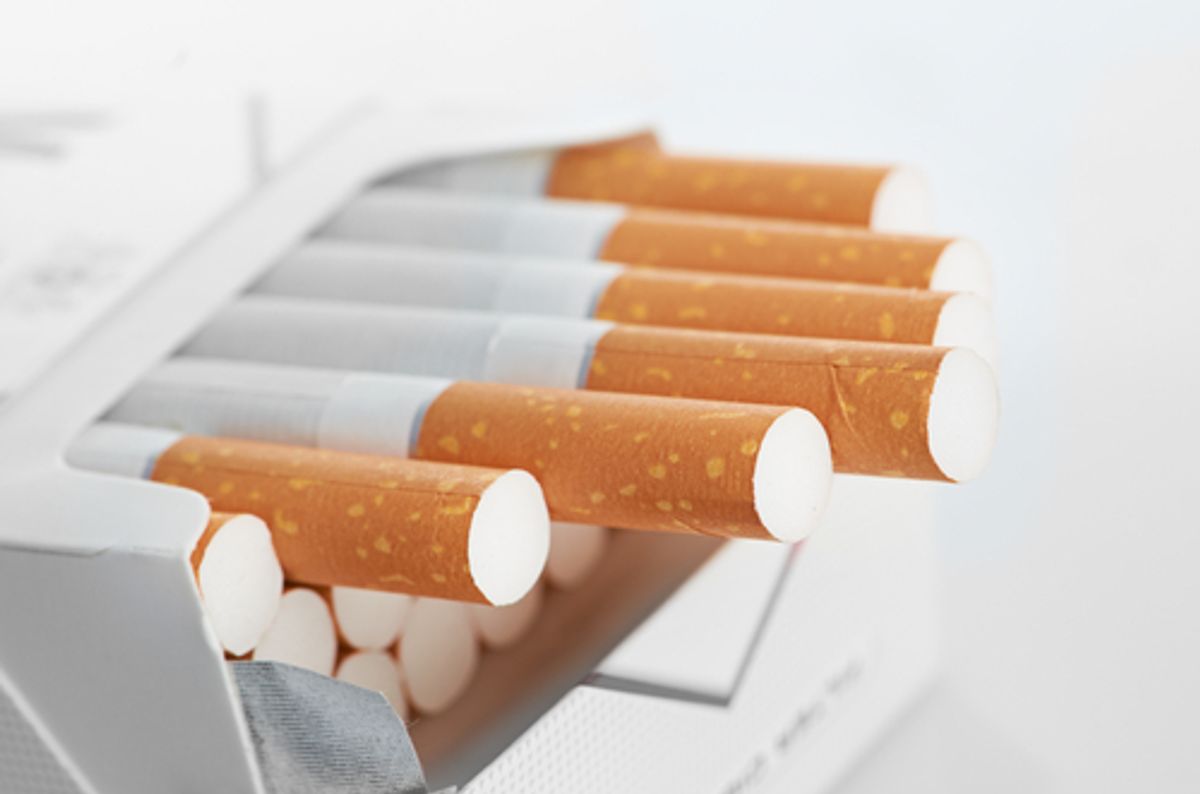 I’m 55 days off of smoking cigarettes.

Quitting is an incredibly difficult feat; urban legend tells us that it takes most people an average of seven attempts to quit successfully. I’ve lost count of how many times I’ve tried. Though you’d think that triumphing over alcohol and bulimia would render nicotine an easy feat, it’s been anything but. In theory, it’s odd that I ever took up smoking in the first place. I’m incredibly vain and I’ve always been active. One of my first memories is comprised of rummaging through my mom’s glove box to find a cherry-red pack of Marlboro reds and subsequently tossing them out the window of the moving car while smiling devilishly at her. Needless to say, she was furious with me, and I was crushed that she didn’t find my antics charming. Several years of a pack-a-day habit later, I understand completely.

The first time I seriously tried to quit smoking, I’d been sober about two years. I’d recently taken up running and wanted to see if I could improve my lung capacity; saving money and not smelling like a homeless man were also big draws. Discussing my choice with my boyfriend and sponsor, who were both thrilled, helped solidify the decision. To my surprise, when I moved onto the rest of my support group, they were nonplussed. Half the people I knew seemed to believe that smoking helped us stay sober and sane, and that the emotional havoc that accompanied quitting wasn’t worth the (unlikely) possibility of actually making it to the other side as a nonsmoker. One well-meaning friend explained that smoking produces a rush of cigarette-specific endorphins that can’t be obtained by virtually any other means. Others told me I should wait until I was more emotionally stable, because putting myself in the heightened state of stress brought on by quitting might be too much to handle. I’d like to believe that these friends were all well intentioned. There were, of course, others who were more transparent in their intentions. Some laughed at my avowal or offered me cigarettes. While some of them might’ve just been engaging in some (albeit inappropriate) fun, others were undoubtedly jealous. Making a decision of the self-improvement variety, from quitting smoking to kicking soda, is like an open invitation to criticism to those who are insecure about their own behavior—and what better place to find insecurity-ridden jokesters than in the rooms of AA? My choice prompted other smokers to consider their own pack-a-day habits. This is human nature and I certainly recall assuming when my sponsor explained that she’d quit smoking several years prior at our first coffee and Big Book session, she must’ve been disgusted by me. Ironically, my struggle to quit has taught me immense empathy both for those who’ve quit and those who can’t bring themselves to give it up.

My sober friends’ responses to my decision to quit smoking eerily echoed those of my old friends when I informed them of my decision to get sober. They either laughed or questioned my reasoning—there’s no way that can last forever, right? My old friends didn’t stop me from collecting my four-year coin, but I also don’t see them week after week at meetings and social events or hang out with them while they’re drinking. Those who I do still see from time to time usually choose to abstain when we’re together. Smoking, on the other hand, isn’t something I could just ask my alcoholic friends not to do around me. In AA, at least where I live, being a nonsmoker is the exception, not the rule. It seems to be assumed that if you don’t smoke, you’re used to cigarettes and you’re expected to politely ignore it. Even if the overt pressure to continue from other alcoholic smokers was eliminated, the implicit pressure surrounds every church parking lot, Alano club, and in my case, YPAA event. This isn’t a hostile affront on the part of the collective smokers; at this point, it’s simply hardwired into the culture. As a former member of the collective, I can’t blame them.

Contrary to what some of my unsupportive friends believed, if I can “handle” quitting doing the only things that ever made me feel okay, or make amends to people whose hearts I broke, or go through a breakup without a drop of alcohol, there’s no reason I can’t handle three measly days of withdrawal. Yet it was those first three days that I failed to get through time after time in the beginning. Now, as a seasoned quitting veteran, the physical withdrawal is nothing compared to the social pressure to smoke from my fellow alcoholics.

At first, I tried smoking cigars when socializing—a path that quickly led to sneaking out to smoke on my breaks at work, hair that reeked of cherry-flavored tobacco, a bad habit of hoarding refry stogies in my wallet, and eventually, always cigarettes. My most recent quit date was the result of a final go at the aforementioned scheme. Every time cigars seemed like a good idea, it was well past the point of physical withdrawal—usually a month or so after quitting. I’d like to think that this time it will be different and I’ll muscle through social situations on willpower and prayer. Of course, I’m not the only one who tends to think that way. Regardless, when I was given the opportunity to try the Novus Twigs, I gladly accepted.

The Twigs are curious in that they are virtually identical in weight and nearly identical in appearance to a real cigarette, although they contain no nicotine or tobacco, just “proprietary botanical tinctures and natural flavors” which “effectively provide immediate smoking satisfaction,” according to their press release. I was skeptical of such claims, but I couldn’t say no to something that would supposedly provide the relief of a cigarette without any of the risk. Surprisingly, the Twigs actually felt kind of like smoking—essentially, a rush of cool, flavored air. As an experiment of sorts, I brought one with me to hang out with some sober friends at a warehouse on a Saturday night where I knew everyone would be taking frequent smoke breaks. At the first opportunity, I stepped outside with the smokers and proceeded to “smoke.” Nobody noticed or cared, but being the self-conscious alcoholic I am, I felt compelled to explain myself anyway.

“These are TWIGS! They’re CRAZY!” I exclaimed to anyone who would listen. I couldn’t adequately sum up the sensation without forcing anyone who would listen to try a Twig. Reactions were varied, but most seemed to agree that they were simply “weird,” probably because the Twigs are so different from any other smoking cessation product or e-cigarette on the market. As a former amoker of menthols, I might be biased in claiming that the mint variety in particular is the most cigarette-like of them all. However, the flavor lasted considerably longer than the lemon, citrus, and “smooth” varieties. A couple of pseudo-drags on the mint Twig were inexplicably satisfying; just having it in my hand was enough to not even consider smoking in a highly social, anxiety-producing, smoky environment.

To be fair, I’d been off cigarettes for about a month when I tried the Twigs. Although I wouldn’t regularly consume Twigs—one of my many quitting incentives is to shed literal excess baggage and expenses—it’s comforting to know that they’re around. E-cigarettes are frightening because of their high nicotine content, while Nicorette is expensive, tastes bad, and also packs a high nicotine content. If I’m ever really jonesing for a cigarette, I’d certainly turn to the Novus Twig before lighting up, and I’d be willing to bet it might quiet the urge.

However, part of the appeal of being a nonsmoker is to have the ability to sit with that needy void when it pops up—to be self-assured and confident enough to not need a cigarette or any sort of placeholder. Sitting through discomfort is virtually impossible when you’ve got a pack of cigarettes. Replacements, while physiologically less damaging, are not spiritually equal to being a true nonsmoker. As long as there is  “fix” of sorts to fixate on, I feel like something is being neglected internally. When I was in my cigarette heyday, I smoked when I was stressed, sad, celebrating, and everything in between. I didn’t feel complete outside—and sometimes inside—without a cigarette in hand. Social situations required nearly twice as many cigarettes as my normal quota. Despite all this, historically, social situations have brought me to my knees time and time again, cigarette or cigar in hand. Ideally, I wouldn’t need anything to get me through a few hours with friends, but getting caught in an endless loop of quitting smoking has taught me that coming to terms with reality is crucial to getting results. Maybe the best compromise right now is to turn to the healthiest smoking alternative when the pressure of being surrounded by smokers and immersed in a culture that validates smoking begins to pile up. I only hope that, eventually, the people I’m surrounded by will get there too, one by one.