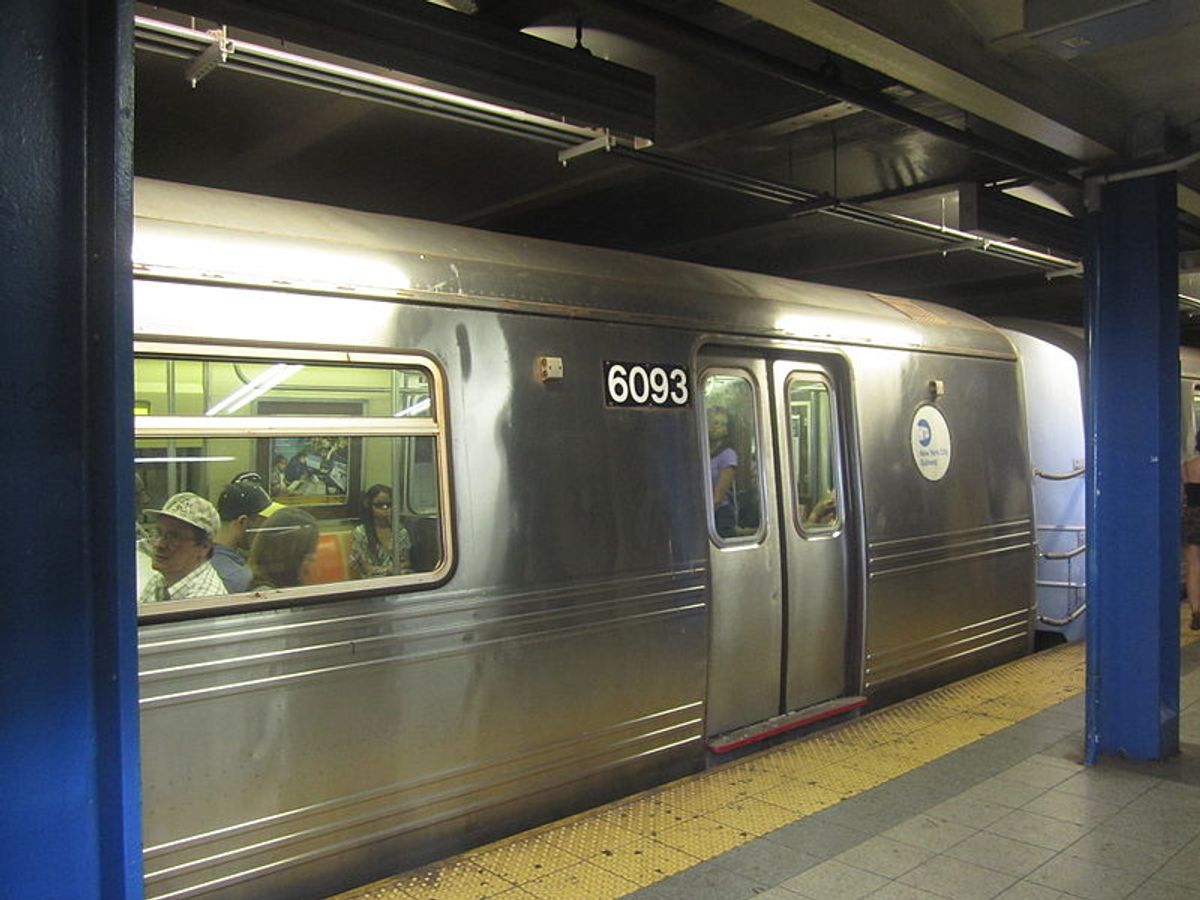 Sunando Sen, a 46-year-old Indian immigrant, recently opened a small copying and printing business in New York City’s Upper West Side with his hard-earned savings. Described by friends as “very educated” and “so quiet, so gentle, so nice,” Sen’s American dream ended in tragedy last Thursday when Erika Menendez fatally pushed him in front of an oncoming subway train.

Menendez admitted the hate crime, explaining she “pushed a Muslim off the train tracks because I hate Hindus and Muslims ever since 2001 when they put down the twin towers I’ve been beating them up."

Never mind that Sen was raised Hindu and the 9-11 terrorist attacks were coordinated by 19 foreign hijackers primarily from Saudi Arabia.

An unbalanced, paranoid mind marinated in our oversaturated Islamophobic environment is numb to such cultural specifics and susceptible to conflate anyone appearing “Muslimy” as the “enemy.”

Although Islamophobes did not cause the NYC murder, they contaminate civil society with their toxic ideological fuel and remain a beacon for bigots, hate-mongers, and the mentally unhinged, all of whom emerge from the same diseased infrastructure.

The cost of such hate is mostly borne by members of the AMEMSA (Arab Middle Eastern Muslim South Asian) communities, however the tainted profit is collected by bloggers Pamela Geller and Robert Spencer, co-founders of the “hate group” Stop Islamization of America (SIOA), part of the lucrative  “Islamophobia network” subsidized by inciting fear-mongering and misinformation against Muslims.

SIOA claims that it is a “human rights organization dedicated to freedom of speech, religious liberty, and individual rights; no special rights for special classes.” However, the Anti Defamation League reviewed SIOA’s activities and concluded SIOA “promotes a conspiratorial anti-Muslim agenda under the guise of fighting radical Islam. The group seeks to rouse public fears by consistently vilifying the Islamic faith and asserting the existence of an Islamic conspiracy to destroy ‘American’ values.”

In the fall, SIOA purchased inflammatory anti-Muslim ads that continue to appear in New York City and Washington D.C. metro stations and buses.  One ad reads: “In any war between the civilized man and the savage, support the civilized man. Support Israel, Defeat jihad,” suggesting all Muslims are savages. Another ad features a picture of the World Trade Center towers burning next to two Quran quotes.

In light of SIOA’s recent propaganda in NYC subway stations, it is not far-fetched to wonder if Menendez’s hate toward Sen was in some way influenced by these ads.

After news broke of Sen’s murder, Robert Spencer tweeted what sounded like a justification for senseless, anti-Muslim hate crimes: “If Muslims would stop doing evil in name of Islam and jihad, no one would respond with evil to them.”

This is typical rhetoric from Spencer, a hack whose writings are so toxic they reverberate globally and damage both national security and our relationship with Muslim communities abroad. Before her death, Pakistan’s former Prime Minister Benazhir Bhutto name-checked Spencer in her biography as an individual who “uses the Internet to spread misinformation and hatred of Islam…he presents a skewed, one-sided, and inflammatory story that only helps sow the seeds of civilizational conflict.”

Spencer’s blog “Jihad Watch” was cited more than 162 times in mass murderer Breivik’s manifesto.  Spencer has published the writings of Serge Trifovic, one of the leaders of the Bosnian Serbs during the ethnic cleansing of Bosnian Muslims. Spencer believes the neo-Nazi group English Defense League “deserves the support of all free people.”

Spencer’s colleague in hate, Pam Geller, who never met an anti-Muslim conspiracy theory she didn’t immediately publish as fact, believes “devout Muslims should be prohibited from military service. Would Patton have recruited Nazis into his army?” She also thinks President Obama is a Muslim, illegitimate son of Malcolm X who once went to Pakistan for drugs and jihad, and that the Arabic language is a spearhead for anti-Americanism. She believes stealth jihadists have infiltrated Disneyland because employees wear headscarves to work. Like Spencer, Pamela Geller once strongly endorsed the English Defense League writing, “I share the EDL's goals... We need to encourage rational, reasonable groups that oppose the Islamisation of the West.”

In a perfect world, these rantings would be amusing fodder for an amateur comic.  However, when over 60% of Americans say they do not know a Muslim and Islam has its lowest favorability rating ever, extremists like Geller and Spencer disproportionately inform and influence the nation’s conversation and perceptions about Islam and Muslims.

According to a new quantitive analysis published by the American Sociological Review, sociologist Christopher Bail mentions Stop Islamization of America as one of the “angry and fearful fringe organizations” that “not only exerted powerful influence on media discourse about Muslims in the aftermath of the September 11th attacks, but ultimately became some of the most influential mainstream groups in the field. By 2008, these fringe organizations not only permeated the mainstream but also forged vast social networks that consolidated their capacity to create cultural change.”

These Islamophobic memes do not exist in a victimless vacuum. There is a cost to such dissemination of hate.

SPLC mentions the 2010 Ground Zero Mosque debate as the key driver for the recent surge in anti-Muslim sentiment. The controversy and subsequent protests against the Park 51 community center, which is neither a mosque nor at Ground Zero, was directly manufactured and orchestrated by Pamela Geller and SIOA. Now, there are over 50 ongoing nationwide movements against allowing Muslims to build their constitutionally protected houses of worship.

Recently, a man convicted of setting fire to an Ohio mosque said Fox News convinced him all Muslims are “terrorists.”

Last August, recently defeated Rep. Joe Walsh (R-Ill.) told a town hall in Chicago that Muslims in America are "trying to kill Americans every week.” A few days later, air rifle shots were fired at a mosque in north suburban Morton Grove, Illinois. Soon after, someone hurled a 7-Up bottle filled with acid and other unspecified materials at an Islamic school in Chicago during nighttime Ramadan prayers.

Nearly 31 states have introduced an anti-sharia bill, which is about as necessary as a bill banning big-foot or unicorns.  Yet, 6 states have passed it (Louisiana, Arizona, Tennessee, Kansas, South Dakota, Oklahoma.)  The author of the bill is attorney David Yerushalmi, who serves as counsel to none other than Pamela Geller.

Islamophobia is not just a "Muslim" issue. It never was. Sadly, it is a cancer affecting all our communities.

Sen’s horrific death was yet another episode in which an innocent individual’s brown skin tragically caused him to be mistaken as an anti-American threat. Last August, White supremacist Wade Michael Page murdered six Sikh Americans at their Wisconsin temple. The first post 9-11 hate crime murder was of Arizona gas station owner Balbir Singh Sodhi, a Sikh American specifically chosen by the murderer because he was “dark-skinned, bearded and wore a turban.”

A senseless tragedy like this affords an opportunity, requires necessity and demands urgency for diverse American communities, especially Muslims, Sikhs and Hindus, to unite in solidarity against hate and intolerance. In America, there exists space for legitimate criticism, debate, and discussion about  religion, race, and ethnicity. But we must finally confront ourselves and ask how do we, as a society, benefit from hysteria, fear and scapegoating? What do these Islamophobes inspire except division and lucrative, personal paychecks?

Yes, we give the KKK a freedom to speak their nonsense, but we as citizens and as a nation have disempowered them, denied them a mainstream platform and silenced their megaphone.

The question now at hand is how many Sens and Sodhis will it take to expose these fringe Islamophobic voices, marginalize them, and move onward, together, as they slither in shame and eventually drown in their own irrelevance.