"Jungleland": In search of a lost city 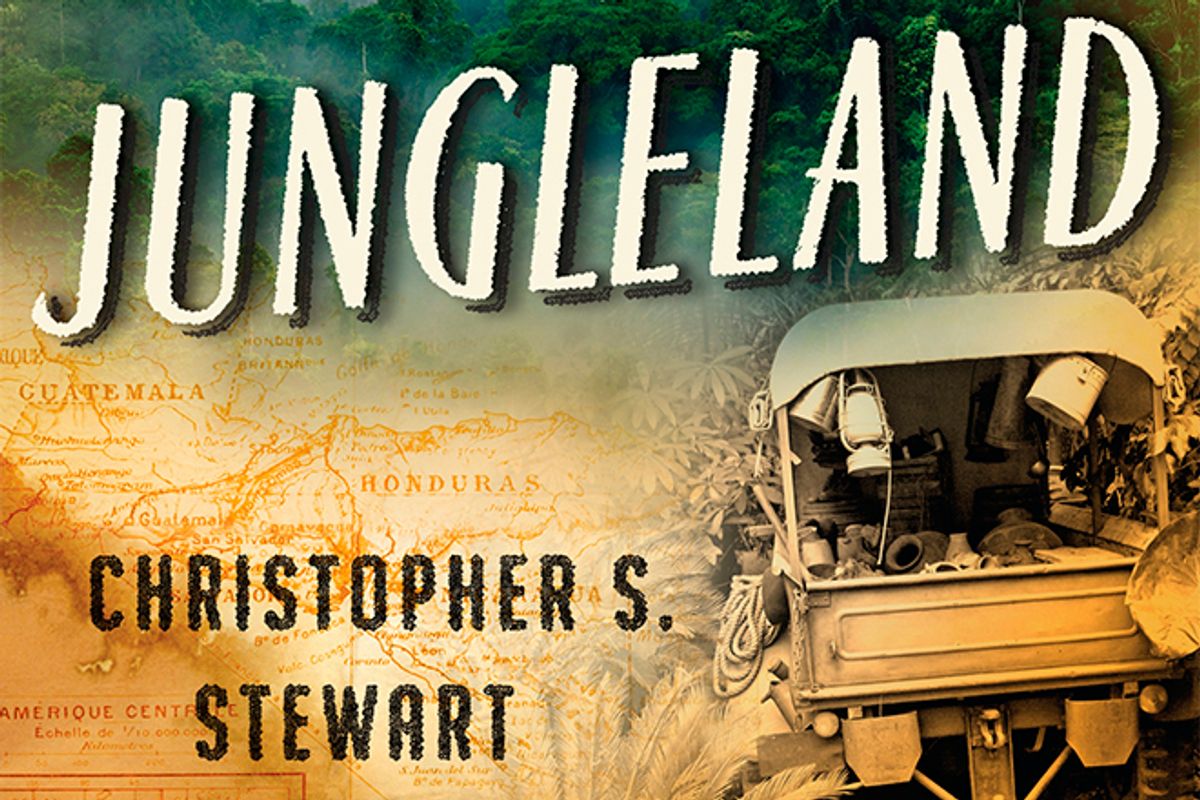 The true story Christopher S. Stewart has to tell in "Jungleland" resembles nothing so much as the set-up for one of H. Rider Haggard's old pulp adventure novels. It's got a fabled lost city somewhere in the midst of a trackless rainforest, intrepid explorers, stoic guides, assorted dangerous animals and sinister bad guys, and a dash of espionage. Even the local tribesmen get in on the act, issuing forth vague warnings about "forbidden" zones, the voices of the dead, evil spirits and monkey gods.

Stewart, a journalist specializing in war and organized crime, first heard about Ciudad Blanco -- the White City, a magnificent ruin rumored to be buried deep in the jungles of the Mosquitia region of Honduras -- while reporting on the booming Honduran drug trade in 2008. An American ex-soldier who had been involved in training the Nicaraguan contras told him about the legend while describing Mosquitia as the "shittiest, buggiest shithole jungle in the world." Stewart was soon obsessed, and in a few months, he was on a plane for Central America.

He was far from the first to heed the call. Explorers ranging from Columbus to Cortes had taken note of the rumors, and the first Catholic bishop of Honduras informed the king of Spain that he'd heard tell of the city from the lips of an "Indian princess;" she said its aristocrats ate from solid gold plates. Charles Lindbergh claimed to have spotted the white ruins of "an amazing ancient metropolis" while flying over Central America, and many other visitors to the region have found artifacts that seem to be the remnants of a sophisticated culture. The most recent and apparently reliable eyewitness account dated back to 1940, when Theodore Morde, a 29-year-old adventurer from Massachusetts, claimed to have stumbled on the city while wandering in the heart of the jungle.

Although its premise resembles that of David Grann's bestselling "The Lost City of Z" (about attempts to substantiate similar rumors of a lost city in Brazil), "Jungleland" is less about archaeology or history than it is about the exploring urge itself: both the hope that the world still contains remote and fabulous mysteries and the paradoxical desire to unearth them under challenging conditions. Stewart recalls daydreaming of Mosquitia in the Brooklyn Ikea while his wife and 3-year-old daughter shopped for a sofa, imagining himself "living off the forest, eating what I caught, drinking river water," in a quest for the White City -- a quest that he also envisioned as an effort to better know himself.

"I feel old," Stewart told his wife, who very sensibly pointed out that, for all his experience in war zones and underworld hangouts, he didn't even know how to camp. He is also afraid of snakes, and the Honduran jungles feature some of the most venomous, including the dreaded fer de lance, a serpent whose bite causes its victims "to start bleeding from all your pores and orifices, including your eyes." Still, Stewart insisted on going.

Yes, "Jungleland" does belong to that genre of memoir in which a reluctant young man kicking against the traces of what he imagines to be adulthood finally reconciles himself to a new stage of life as husband and father. This is, it must be said, a genre for which very few readers have much patience or sympathy, but Stewart's own story is made more poignant by its juxtaposition with the biography of Morde, who had circled the globe five times by the age of 26, worked for the OSS (precursor of the CIA) during World War II and ended up hanging himself at the age of 34.

It's also a ripping yarn -- or, rather, two ripping yarns braided together. Stewart obtained Morde's expedition journal, and while his own travels in Mosquitia weren't exactly "in the footsteps of" the other man, he makes the most of the many parallels between the two journeys, skillfully jumping back and forth. Stewart and his (fortunately very experienced) traveling companion, archeologist Chris Begley, set out amid rumblings of war set off by the 2009 coup that overthrew Honduran president Jose Manuel Zelaya "Mel" Rosales. Morde's expedition was launched near the beginning of World War II, and both groups of explorers would emerge from the jungle occasionally, craving updates on the evolving conflicts.

Both teams endured fevers, punishing downpours and bone-rattling rapids. They questioned reticent indigenous peoples and heard weird stories about ferocious jaguar sentinels and siren-like witches who lured men to their death in the guise of beautiful women. Each expedition had to form temporary alliances with highly dubious characters; Morde's group stayed with an American expat who informed them "I've killed six men, but they had to be killed," and Stewart and company bought a ride on a boat full of "timber pirates," hardened criminals engaged in the sale of illegally harvested trees.

If the jungle was denser and the technology less potent in Morde's day (Stewart brought along a GPS device and satellite phone, as well as Clif Bars and Valium), the modern-day explorers also had to dodge drug runners and other criminals in a nation with the highest murder rate and one of the highest levels of corruption in the world. They drove to their trailhead on a highway known as Bandit Alley and walked through large swathes of clearcut. Pancho, their stalwart guide -- an object of Stewart's wonder because he wore a shirt "that throughout the trip would always look as though it had just been ironed" -- took them to a tiny village he helped to build and dearly loved; he had been driven from that home by armed thugs. Where 16 houses once stood there is now only jungle, another of the lost dreams whose traces Stewart found everywhere he looked during his journey.

Stewart is a crisp, lean, colorful stylist, with that essential knack in any good travel writer or feature journalist: a nose for punchy, telling anecdotes and images. They meet a villager who wants to know where he comes from and, upon hearing the answer, asks if it's possible to walk to Italy from New York. (Then he tells the group that he loves Rambo, a movie he hadn't realized was American.) To judge from the excerpts Stewart quotes, Morde (an off-and-on AP correspondent) had the same knack. "Jungleland" is great fun to read, mostly because it's not trying too hard to be more than great fun to read. Reflection is not Stewart's forte and his strivings toward "the big questions of life -- getting older, leaving youth behind, commitments, the importance of experience and discovery, and even love" come across as merely dutiful. Fortunately, they're kept to a minimum.

But what about Ciudad Blanca: Did he find it? There is a thrilling chapter toward the end where Stewart and Begley find themselves walking among high green mounds, small houses or buildings long covered over with vegetation. There are more and more of them, and then Begley kicks aside the vines underfoot to show Stewart the scattered cobblestones of a thousand-plus-year-old road. They pass an ancient stone wall, even bigger mounds, and finally climb to a creeper-swamped, mountaintop temple, "about four stories tall and as long as a football field."

Stewart turned to Begley and asked, "Is this the city Morde found?" The answer, like much about Mosquitia, is more complicated than you might think, and with it "Jungleland" takes a surprising turn toward real depth. As they say about the jungle thereabouts: It may be easy to get into it, but it's awfully hard to get out.