"Girls": Can this friendship be saved?

"Girls'" Hannah and Marnie had one of the rawest, most brutal BFF fights depicted on TV. They'll survive. I think 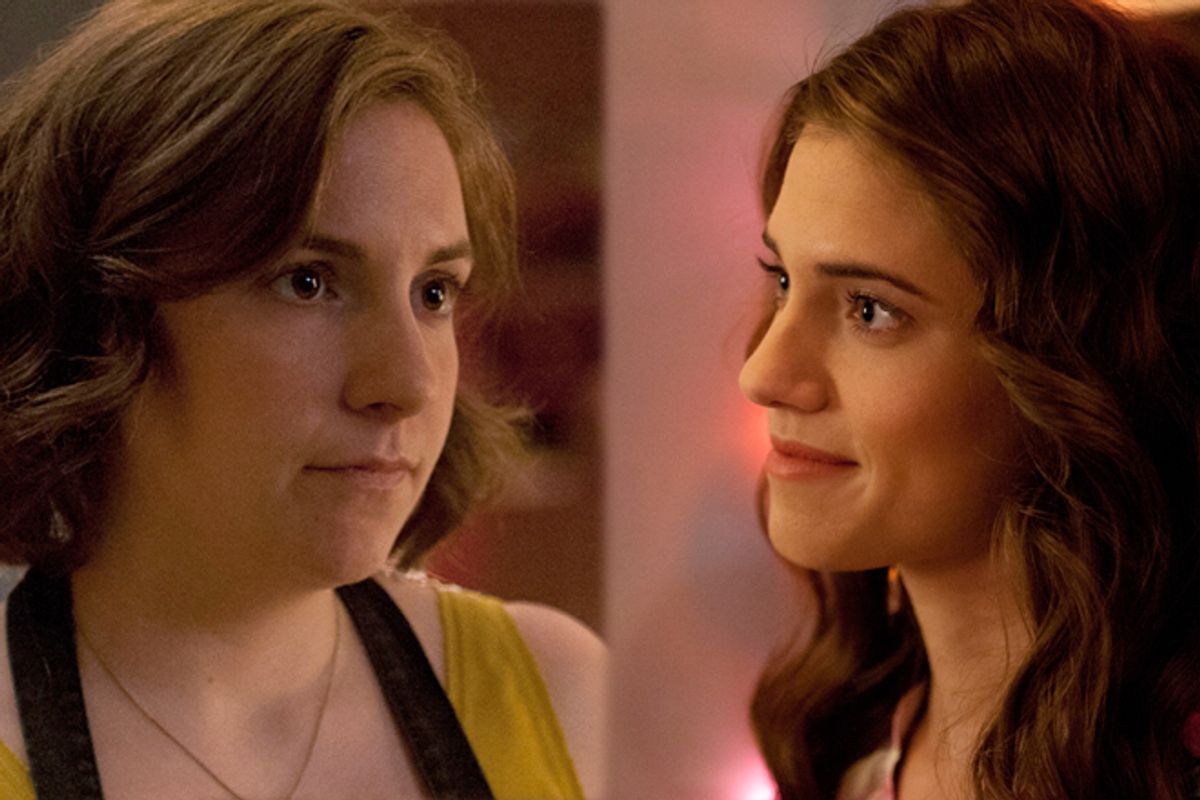 From the time we’re little we’re told nothing is more precious than our female friends. We sign our letters BFF. We bond by sharing our most intimate secrets with each other, which is what endows us with the ninja-like skill and power to psychically disembowel each other.

I hate fighting with friends. I’m prone to fits of hysterical deaf, dumb and blindness at the first whiff of a dust-up. The stakes are too high. I’d rather they run me down with their car than tell me I’m insensitive.

Which is why when I watched "Girls," and witnessed the blowout between Hannah and Marnie toward the end of the season (Episode 9),  I was seized by a mild terror. Not because I was so emotionally invested in this friendship, but because it was so true.

I shouldn’t have been surprised: While Dunham gives shout-outs to "The Mary Tyler Moore Show" and "Sex and the City" in the first episode, it’s clear that "Girls" is a different beast altogether. Honestly, can you imagine Carrie and Samantha spooning in bed? Mary eating a cupcake in the tub while Rhoda sits on the edge in a towel shaving her legs? Yes, those girlfriends argued, but with five minutes left in the show they were weeping and apologizing over a gallon of Rocky Road or a round of Cosmos. Not so in "Girls." Then again, Rhoda never set up a doctor’s appointment for Mary to have an AIDS test, and Samantha never financially supported Carrie. So it should come as no surprise that when Marnie and Hannah do have a fight — a big BFF steel-cage death-match — it would get real.

Confession: From the beginning I gave Dunham props for her clever writing, the verisimilitude of her sex scenes, and her willingness to be naked, literally and emotionally. But I wasn’t a real fan of "Girls" until Episode 9, the episode of the fight. Where Dunham throws gasoline on the psychic kindling that has been smoldering since the first episode.

Dunham’s handling of the fight scene between Hannah and Marnie is masterful. Her use of therapy speak: “Now I need closure,” the back and forth of “You’re a wound!" "No, you’re the wound!” was like Woody Allen on estrogen, the show rising to the level of social satire. Not only that, but the entire foundation of the girls’ friendship, and the arc it has traveled, is revealed in this one scene. It’s got all the girl-trouble highlights: You’re fat. You’re selfish. You’re jealous. You’re a user. You’re boy-crazy. And finally — the coup de grace — you’re a bad friend! No you’re a bad friend. In a culture that prizes and fetishizes female friendships to the point of ludicrosity, the worst thing a girl can say to another girl is, "You’re a bad friend."

Even those of us who are mostly strangers to fighting have made ourselves vulnerable by asking, “Are you mad at me?” When Hannah asks, it’s an invitation to an argument.

When Marnie answers “no” while stuffing the clothes -- that shitty old stuff she’s been wanting to get rid of for a long time -- into the incinerator (except for an old dress that Hannah took even though as Marnie none too subtly suggests it’s going to be too tight on you) she is not only affirming, Yes I’m mad at you, you fat, lazy bitch! she is casting off her past self, and steeling herself for war.

But the fire that burns up Marnie’s clothes is contained.

Hannah and Marnie have been playing with matches, and that’s dangerous. Hannah, despite entering the fight in a demoralized and weakened state, is going to retaliate. After all, Hannah by her own admission is used to beating up people; she works herself over regularly and unmercifully. Still, she manages to get back up on her feet because she is a survivor.

No, she didn’t! OMG. You don’t say that. But Marnie just blurted it out. She didn’t, as Hannah says, tell anyone, but in her mind that’s what it feels like. She’s betrayed her on the most elemental level. She’s said the thing you can’t say. Hannah accusing her of being a shallow and status-seeking bitch doesn’t come close.

While both girls accuse the other of “always having been this way,” Marnie demonstrates that she’s forgotten nothing. Hannah will never be safe. When Hannah responds to the accusation that she’s a bad friend, with “Maybe that’s NOT WHAT’S IMPORTANT TO ME right now. I don’t give a shit about being a 'good friend.' I have bigger concerns,” Marnie takes the high ground: “That’s all I needed,” she says. She can’t be faulted for walking away.

I believe, as in real life, neither woman expected that this fight would escalate as it does, that those smoldering coals of resentment and anger would become a devastating conflagration.

But what was Marnie supposed to do? In college she and Hannah were equals. Now, two years later, she’s turned her into her mom/therapist/patron/landlady. How long was Marnie supposed to tolerate Hannah sponging off her? Seriously? Eating her yogurt. And, she gave Adam the key to their apartment? Hello? That’s like giving the love child of Rain Man and Wonder Woman the key to your apartment. And, insult to injury, she’s forced to endure the sounds of their fucking?

And how long could Hannah stand Marnie mewling about Charlie, nagging her about the rent, accusing her of whining and being lazy. And how about the fact that Marnie always looks put together?

Ironically, in my very unscientific survey of "Girls"-watchers, teens and 20-year-olds didn’t register the fight as being as significant as viewers 30 and up did. Why? One reason might be that while the fight begins with accusations of selfishness and not listening, jealousy over having a boyfriend — something girls accuse each other of all the time — the underlying issue fueling the blow-up is money and power, something that, as you get older, you realize is a huge deal. In college, we’re all, for the most part, equal, and because this is America, allegedly have the potential to achieve the same level of wealth. However, outside of college the scale is different as personal worth becomes equated with financial worth.

What we see is that Hannah, because she’s an artiste, feels entitled to be supported. Her refusal to acknowledge that there’s anything wrong with not paying her share of the rent is an issue and emblematic of her selfishness and narcissism, while Marnie’s equating of wealth with happiness and fulfillment is simplistic and woefully misguided.

Watching this perfect storm of rage and disappointment gave me chills. It was agonizingly authentic. The consequences — Marnie moving out, and Hannah having to find a way to support herself, whether by getting a steady job or getting Adam to cover the rent — are real. Hannah’s invitation to Marnie to stay in the apartment until she finds her own place (assuming she won’t choose to live with another friend) comes from a place of wanting to reconcile, but it’s colored with denial. Can she really trust Marnie now that she’s revealed herself to be more than willing to hurt her? How can Hannah, as an artist, possibly be best friends with someone who doesn’t respect that making art is a job and it’s hard? That success for her won’t be measured in dollars? How can Marnie, who longs to be an adult, surrounded by ambitious, positive go-getters, possibly return to being best friends with Hannah?

At this point, with some distance, enough wine and tears and apologies, this friendship will be restored. It has to be. We take our girlfriends back, because we don’t want to be a bad friend. We want to forgive. We need to forgive them because, more than lovers, we need to be known in the way only a girlfriend can know you. We need to be accepted.

We know that these women are going to grow, and in different directions as they must. However, no matter who they grow up to be, they were becoming who they will eventually be, together. That shared history and intimacy belongs to them and one time, and it won’t be repeated. Not only is it impossible. It’s too intense.

In those early friendships we learn what it is to be in love. We learn how badly we can be burned by another person, how easily a friendship can be extinguished. In the future, we are, for better and worse, more careful with our hearts.