MTV may be “heck-bent” on exploiting misguided youth for profit. But "creekers" do exist. And so do people like me 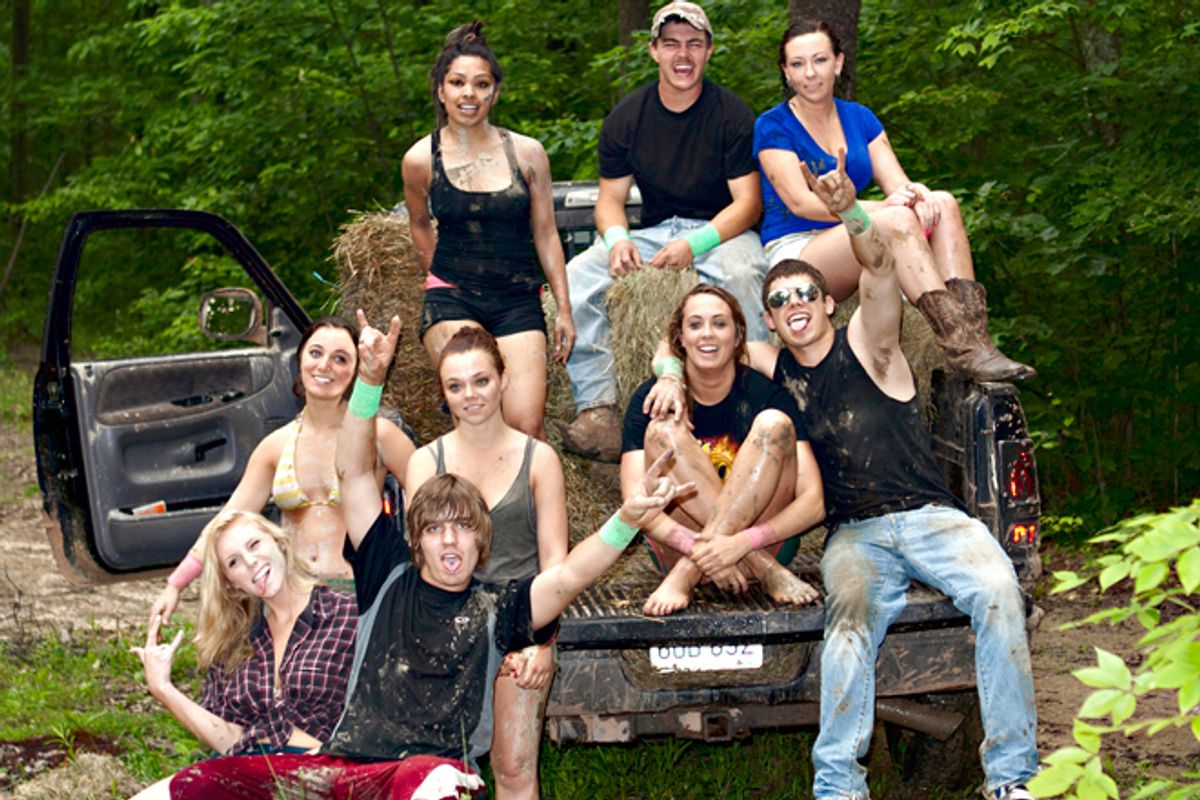 After MTV announced its new reality show “Buckwild” last month — the series debuts tomorrow night —  it wasn’t long before friends started sending me links to the trailer without comment — the virtual equivalent of excitedly tapping me on the shoulder and saying, “Look! Your people!” The show, described as the “‘Jersey Shore’ of Appalachia,” stars “an outrageous group of childhood friends” who live, party and shoot potato guns in Sissonville, W.Va. In the trailer, one cast member receives a “birthday lickin’”; another boasts, “I don’t have no phone, Facebook — none of that Internet stuff.” My fellow West Virginians were quick to decry “ugly, inaccurate stereotypes!” and the state’s “Democratic” senator (formerly, governor) Joe Manchin III even went on the "Today" show to denounce the “travesty.” After using the phrase “heck-bent,” he called West Virginia “one of the greatest states in the nation” and suggested, cringe-worthily, that maybe MTV could “show a balance” by presenting the state’s “greatest young adults who’ve accomplished an awful lot,” alongside the “Buckwild” cast. The big, bad media responded with the noble savage argument; in an interview with Entertainment Weekly, one of the show’s producers called the lack of Internet thing “refreshing” while Tricia Romano, writing for the Daily Beast, deferred to TV historian Tim Brooks. "There is some self-awareness over what they are doing,” she quoted Brooks. “They are proud of it. One of the things you learn from these shows is that people who aren’t like us may be proudly not like us. They live differently intentionally."

I grew up about 40 miles from Sissonville in a town called Hurricane — mildly amusing, I know. Because I “escaped” to Yale, I’ve often been, if I wasn't lumped in with them, at least an expert anthropology student of that “they.” When professors or classmates heard I was from West Virginia, their responses were almost always some variation on, “But you don’t seem like you’re from there.” I was often told that I don’t “make sense”: How could a smart, liberal feminist who works out five times a week come from a place known for making Jamie Oliver cry because its people are so obese? I once had a conference with a writing professor who, after exhausting every possible explanation for my existence, asked me flat-out, “How are you like this?” I responded with a familiar combination of I-didn’t-go-to-Exeter shame and at-least-I’m-kind-of-quirky-right? pride: “I don’t know.”

I often let stuff like “Buckwild” (or obesity statistics, or “devastating” slideshows of mountaintop-removal images, or a median income ranked 48thin the United States) answer for me when someone asks, “Where are you from?” Unlike, say, Nebraska, West Virginia is at least distinctive. When I crack self-deprecating jokes about being uneducated and toothless in an exaggerated ain’t/y’all drawl, I seem like an academic Cinderella story. Given that I am actually so educated that mention of my alma mater connotes crustless cucumber sandwiches and the inability to converse with one’s plumber, people like that. The truth, however, is more complicated.

I didn’t spend my childhood rolling around in a giant tire. It’s a little ridiculous that I have to make this point, but experience tells me I should: Most West Virginians aren’t seven-toothed rednecks who spend days in the coal mines and nights with their cousins. I often felt out of place at Yale not because I was used to living in a trailer and gorging on pepperoni rolls, but because I never had a private French tutor or even a household subscription to the New Yorker. The West Virginia I grew up in is boring and unremarkable, and sensationalizing it is easier than facing how I really feel: a fluctuating combination of resentment, shame, guilt and begrudging fondness. In comparison to former refugees of war-torn African nations, first-generation college students or a Russian immigrant dumped into an American kindergarten class with a lunchbox and not a single word of English, a suburban, middle-class National Merit Scholar isn’t exactly a portrait of struggle. The thick accent, the loud, obnoxious insistence on “freedom,” the mud-splattered all-terrain vehicles — none of that is me.

Everyone can agree that MTV is “heck-bent” on taking advantage of misguided, provocatively dressed youths for profit. But that’s a stock accusation, and it ignores both the lessons we might be able to learn from “Buckwild” and the responsibility we should be taking for what it represents. West Virginians’ complaints about the show — that it’s going to promote false, negative stereotypes unrepresentative of the state — are neither productive nor particularly on point. Make as many tired comments about the artificial “reality” of reality television as you want; the trailer depicts a very real West Virginia. “Creekers” — they lived “up the creek” — didn’t make up the majority of my high school, but they were always around. Spitting chewing tobacco into Mountain Dew bottles. Driving trucks with Confederate flag decals on the back windows. Getting into fights in the hallway.

My life was never so insular, but those “creekers” are just as real as I am. I recognize in the “Buckwild” trailer a familiar unwillingness to accept or interact with the world outside the nearest Wal-Mart parking lot. When I told my guidance counselor — whom I worked with because she specialized in "gifted" students — I was applying to Yale, she responded, "Oh, you probably won't get in there." My trigonometry teacher begged me to consider Marshall University or WVU instead. Now, friends tell me they feel "trapped," then ask me why I like traveling to London or Berlin — isn't New York good enough? The cast members of “Buckwild” might be proud of their lifestyles, but to live that way intentionally would require exposure to the rest of the world that West Virginia education systems rarely offer. It’s not a "refreshing" choice, a valiant rejection of what the MTV producer called “the crap in daily life.” It’s ignorance.

West Virginia is neither the greatest state in the nation nor a land of inbred savages, and its problems won't be solved by sound bites or synecdoche. When Sen. Manchin appeared, wide-eyed and out of touch, on the "Today" show, he sounded less like a competent spokesperson for a population that deserves to be taken seriously and exactly like the kind of provincial buffoon the cast of “Buckwild” would elect. His attempt to act the white knight, to take credit for defending his constituency without the accompanying responsibility for it, was just as embarrassing as the TV show promises to be.

It’s predictable that MTV would exploit the cast of “Buckwild” — and West Virginia’s bad reputation. I’m guilty of doing the same thing. But when the show premieres on Thursday, I’m not going to deny its fair points or laugh it off with a joke about shoelessness. After all, when a high school friend who moved to Pittsburgh for college tweets about her home in “rural West Virginia,” I can’t help feeling annoyed.

“You’ve never lived in ‘rural West Virginia’!” I scream at my computer while clicking through her Facebook photos. “There’s a Dairy Queen minutes from your house!”

Lauren Oyler is a recent Yale graduate based in Berlin, Germany. Email her at leoyler@gmail.com, read more of her work at http://laurenoyler.com and follow her on Twitter @laurenoyler.