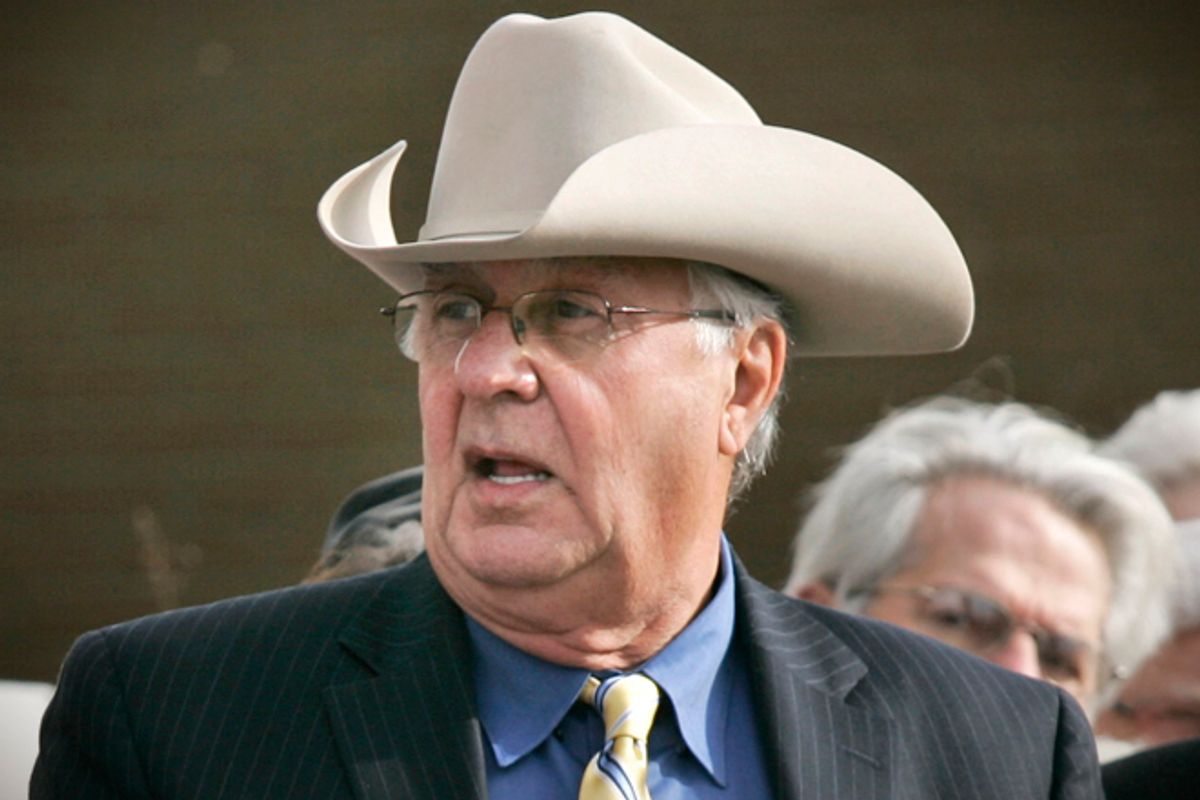 As "Saturday Night Live’s" Stefon would say, this Washington tale has everything: accusations hurled and counter-hurled, handguns, multimillion-dollar payoffs — just what we needed to briefly distract us as the parties played chicken up on Capitol Hill’s fiscal cliff.

The story first came to public attention in early December, when David Corn and Andy Kroll at Mother Jones magazine reported that “former Rep. Dick Armey, the folksy conservative leader, has resigned as chairman of FreedomWorks, one of the main political outfits of the conservative movement and an instrumental force within the Tea Party.

“Armey, the former House majority leader who helped develop and promote the GOP’s Contract with America in the 1990s, tendered his resignation in a memo sent to Matt Kibbe, president and CEO of FreedomWorks, on Nov. 30. Mother Jones obtained the email on Monday, and Armey has confirmed he sent it. The tone of the memo suggests that this was not an amicable separation … Armey demanded that he be paid until his contract ended on Dec. 31; that FreedomWorks remove his name, image or signature ‘from all its letters, print media, postings, web sites, videos, testimonials, endorsements, fund raising materials, and social media, including but not limited to Facebook and Twitter’; and that FreedomWorks deliver the copy of his official congressional portrait to his home in Texas.”

Armey told Mother Jones, “The top management team of FreedomWorks was taking a direction I thought was unproductive, and I thought it was time to move on with my life.” The next day, the Associated Press reported, “A confidential contract obtained by The Associated Press shows that Armey agreed in September to resign from his role as chairman of Washington-based FreedomWorks in exchange for $8 million in consulting fees paid in annual $400,000 installments ...”

“According to the contract, Armey’s consulting fees will be paid by Richard J. Stephenson, a prominent fundraiser and founder and chairman of the Cancer Treatment Centers of America, a national cancer treatment network. Stephenson is on the board of directors of FreedomWorks.”

Shortly after, both AP and USA Today followed up on findings from the nonpartisan watchdog Sunlight Foundation and reported that William Rose, an attorney in Knoxville, Ten., had recently created two companies that funneled more than $12 million in contributions to FreedomWorks. As USA Today noted, “Under U.S. law, corporations can give unlimited sums of money to outside groups supporting candidates, but not if their sole purpose is to make campaign contributions.”

But where the money really came from remained uncertain, and both Dick Armey and FreedomWorks CEO Matt Kibbe initially denied knowledge of the donations. Armey then told Mother Jones, “This kind of secrecy is why I left. I have never seen anything like this before.”

Why each of them would claim ignorance about the source of so much of the total cash FreedomWorks raised for the 2012 campaign is another missing piece of the puzzle. But in response to Armey’s comments and a Dec. 12 letter from two FreedomWorks board members — Armey allies — citing “allegations of wrongdoing by the organization or its employees” — mainly, that Kibbe had illegitimately used the organization to promote himself and a book he had written — Kibbe soon mounted a counterattack.

Corn reported that, in a memo titled “Republican Insiders Attempt Hostile Takeover of FreedomWorks,” Kibbe accused Armey and his two boardroom allies “of being shills for the Republican establishment and undercutting the group’s standing as an independent, non-partisan, conservative organization. (FreedomWorks has at times endorsed Tea Party candidates in primary elections against mainstream or incumbent Republicans, drawing the ire of mainline Republicans.)”

“Kibbe charged that the three men were trying to punish him for defying their effort to steer FreedomWorks into the conventional Republican fold. He contended that the divisive fight within FreedomWorks was not really about his book contract or other organizational matters; it was a grand ideological clash pitting those fully loyal to the tea party cause (such as Kibbe) against backroom, Washington-centric pols attempting to wield their influence to benefit their pals.”

There then followed the most remarkable article of all, a Dec. 25 report from the Washington Post that on the day after Labor Day, “just as campaign season was entering its final frenzy,” Armey “walked into the group’s Capitol Hill offices with his wife, Susan, and an aide holstering a handgun at his waist. The aim was to seize control of the group and expel Armey’s enemies: The gun-wielding assistant escorted FreedomWorks’ top two employees off the premises, while Armey suspended several others who broke down in sobs at the news.”

The Post went on to report that Armey’s $8 million departure fee was paid by Richard J. Stephenson to end Armey’s alleged coup and return the ousted FreedomWorks employees to their jobs. Further, remember that $12 million plus in donations from William Rose, funneled through his two Tennessee corporations? It came “after negotiations with Stephenson over a pre-election gift of the same size … According to three current and former FreedomWorks employees with knowledge of the arrangement, the money originated with Stephenson and his family, who arranged for the contributions from the Tennessee firms to the super PAC…”

“Stephenson attended a FreedomWorks retreat in Jackson Hole, Wyo., in August at which a budget was being prepared in anticipation of a large influx of money, according to several employees who attended the retreat. At the retreat, Stephenson dictated some of the terms of how the money would be spent, the employees said … ’There is no doubt that Dick Stephenson arranged for that money to come to the super PAC,’ said one person who attended the retreat. ‘I can assure you that everyone around the office knew about it.’”

And yet Armey and Kibbe both initially denied knowledge of the money. Curiouser and curiouser.

Armey quickly went to Mother Jones’ Corn to defend himself (and if you think it’s ironic that the right-wing rivals in this story keep running to a progressive magazine to tell their respective sides, you’re not alone).

The man with the gun, Armey explained, was Beau Singleton, a bodyguard who used to be part of Armey’s congressional police detail and volunteered security services to him and FreedomWorks. “He was well-known to the people at FreedomWorks,” Armey told Corn. “He has provided me personal security on many occasions when I was in Washington.”

“Singleton, Armey says, is authorized to carry a gun, but he does so in a back holster that cannot be seen by an onlooker. ‘I was unaware he had a gun [at the meeting],’ Armey maintains. ‘He kept it under his coat in the back … But the news looks like Armey came in there like John Dillinger, all guns a-blazing. That was false …’ In the Post’s account, the unnamed gunman escorted Kibbe and Brandon off the premises, but Singleton says he did no such thing. ‘Whatever problem they had with FreedomWorks, I had no issues with them … I was not used to get them out of the office.’”

In a Dec. 28 Washington Post article, Chris Cillizza wrote that the FreedomWorks debacle “exposed the Tea Party’s fractures to a wider audience.”

“At the heart of the schism was the question of whether this outsider movement should acclimate itself to the establishment it rebelled against a few years ago. Could the tea party come in from the cold and enjoy the warm embrace of acceptance, or at least tolerance, from the mainstream GOP? And if not, how could it survive without national leaders to help it become something more than an insurgent effort? In other words, the tea party needed a second act but had no director. And no one could even agree on what the script should be. The result? Chaos.”

Election exit polls in November indicated that, since 2010, support for the Tea Party has plunged. Cillizza concludes, “A movement can become something bigger only if it understands the difference between winning a battle and winning a war — or between a moral victory and an actual one. The Tea Party won a few of the former in 2012 but almost none of the latter."

As for Dick Armey, while telling the Post, “Harm was done to the movement” because of the infighting, he’s running to cash his termination check. In an interview, “as he was winding down his Wii Fit workout,” Armey suddenly exhibited newfound support for entitlements — his own, at least — as he told ABC News, “I can’t stay here [FreedomWorks], I can’t work with people like this, and I can’t afford to leave with empty pockets.”

He said that Richard Stephenson told him, ‘You know, Armey, my family and I have heard your story, about how you can’t afford to retire and we want to help with your retirement … Instead of hard labor, how about you never have to work again forever?”

Nice non-work if you can get it. In Washington, when it comes to the bottom line, cash in hand always trumps ideology. Happy New Year.