I've struggled with extra weight for years. But I've learned the power of sparkly makeup, Diet Coke and acceptance 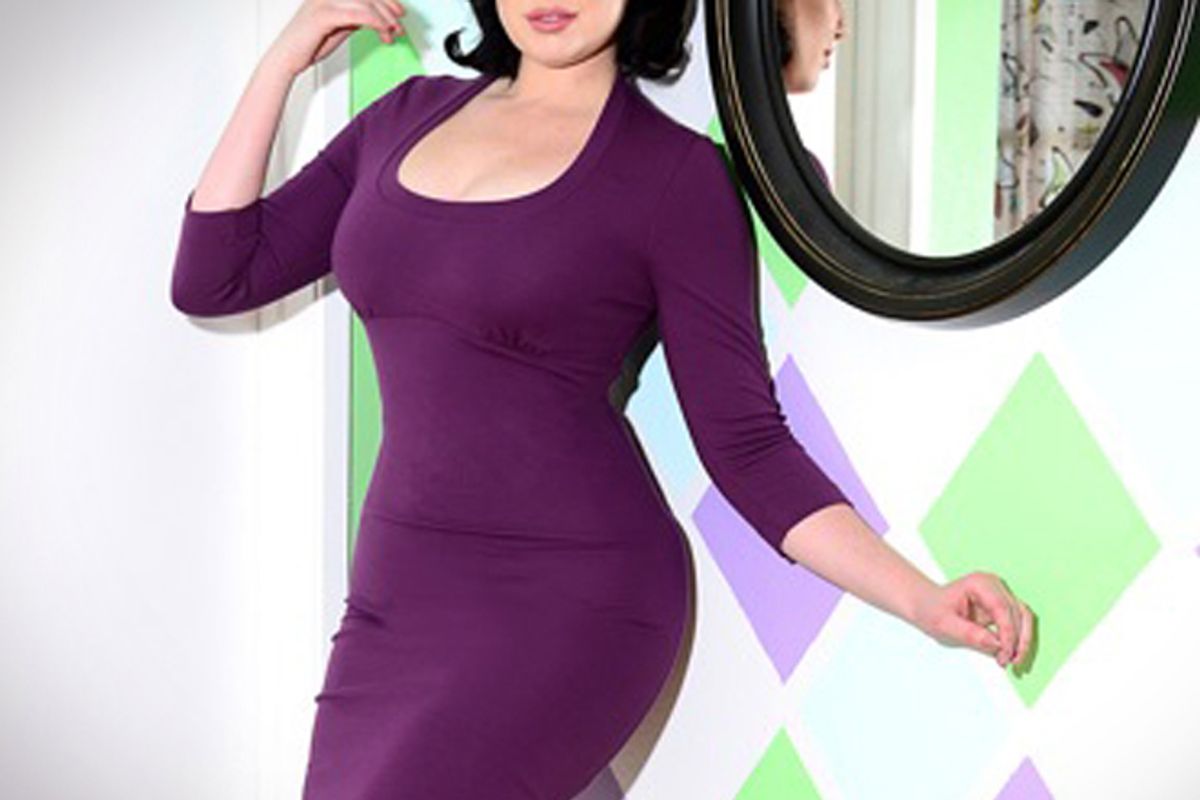 "Body Issues" is a personal essay series about obsessions with our shape.

Over the past two years, I’ve lost more than a hundred pounds. There’s nothing impressive about this feat — it’s not as if I’ve lost the hundred-plus pounds sensibly, sequentially and permanently. Rather, I’ve lost the same five pounds about 20 different times through a series of dubious dietary stunts.

Per the established metrics of weight-to-height ratio and body mass index, I’m not what a medical professional would call exceedingly overweight — though Hollywood, Madison Avenue and the average “thinspiration” Pinterest page would post dissenting opinion. Essentially, I’m your garden-variety mesomorph who doesn’t eat to live but, rather, who lives to eat her feelings.

What consumes me, urging me to mindlessly consume? Usually nothing special — like so many other people, I nosh my way through shame and regret about the past and anxiety about the future. But 2011 and 2012 were exceptional — annus horribilis, times two: I got dragged off by a riptide of depression that I feared might kill me; one of my sisters learned she had lupus; one of my in-laws was diagnosed with small-cell lung cancer; my mother’s COPD landed her in the hospital, and my beloved bachelor uncle fell ill under conditions too horrible to describe and died eight months later. It was not a good couple of years for illusions of familial immortality. No.

No matter what I ate, or how much, I could always count on peeling off five pounds in a few days by drinking lemon water sprinkled with cayenne pepper, tossing back a couple of health store herbal diuretics, and shunning gluten, sugar and dairy. Then I’d get more bad news and close out my evenings by pulling into a fast-food parking lot to eat a jumbo drive-through Value Meal away from the shaming glow of street lamps, only to go back on my regimen of water, diuretics and selective privation. Then, last May, when my uncle went into intensive care, the stress eating became a constant and the weight came on and stayed.

In the midst of all the awfulness, I received a tremendous gift: a namesake dress. My friend Laura, whom I’ve known since the days of the CBGB Sunday hardcore matinees, built a thriving clothing business based on her original designs inspired by vintage '40s and '50s silhouettes. Pinup Girl Clothing features an adorable array of va-va-voomy dresses, and she’d designed one to my specifications — a body-skimming sheath with day-to-night versatility, made of stretchy fabric with a neckline that’s not too low, a hemline that’s not too high, and longish sleeves.  I was looking for two specific features: forgiveness and good coverage.

As soon as it came off the production line, the Burana dress was delivered to me in every available colorway — black, navy, plum and green tea. I zipped myself into the navy, then turned and turned before the mirror: Look at this tailoring, I thought. Gorgeous, gorgeous, gorgeous. My next thought: Oh man, I am way too fat to wear this. I could have asked Laura to send me a bigger size — Pinup Girl sizes items from XS to 2X. But no, I decided, I would wait until I was thin enough to feel good in the dresses I had.

Waiting to feel good was an elusive proposition, physically and emotionally. Even spiritually. In search of comfort beyond the edible realm, I started digging deeper into my quest for some sort of God-like sustenance: Going to yoga, reading books on snuggly, big-tent lefty Christianity, Buddhism, radical acceptance, being in the now. None of it felt better than two double cheeseburgers with extra mustard and large fries washed down by a bucket of Diet Coke, but it seemed important to at least be in the hunt for a more enduring means of soothing my feelings of guilt, loss and vulnerability. I wanted a sense that I was OK, and a bulwark against life’s slights. In other words, forgiveness and good coverage. Is it strange that I wanted the same things from God as I did from a dress?

Then the next box arrived, packed full of more dresses by Laura and her partner, Micheline: the crazy orange-tiger Vamp; the demure yellow-rose-print Erika; the berry, blue and red siren-sleek Erin; the luxe mauve velvet Film Noir with the draped cowl neckline; and the full-skirted cherry-print Heidi, which put me in a good mood just looking at it.  They fit, but just barely. One hardy sneeze and I’d bust the seams. On the same day came an invitation to judge the Miss Exotic World competition at the Burlesque Hall of Fame Weekend in Las Vegas, just a few weeks away in early June.

All the reading I’d been doing featured women coming to terms with the chaos of their lives by dropping back, making gratitude lists, cooking up pots of homemade lentil soup while wearing yoga pants or, on the more moneyed side of spiritual seeking, jetting off to some guru in Belize or going on a silent meditation retreat. But I didn’t want any kind of retreat. I didn’t want to retreat, period. I wanted to surge forward, back into the electric stream of life, and a couple of days in a trashy, sequin-saturated environment might be balm for my girly-girl soul.

I scored a cheap coach-class ticket and jammed my full Pinup Girl kit into my roll-aboard suitcase, along with four pairs of platform shoes, three pairs of false eyelashes, a waist-length hairpiece, a small heap of rhinestone jewelry, and 20 clip-in hair flowers —t he spoils of eBay bargain hunting. I sipped a Diet Coke on the flight — the contest was 12 hours away. Could I lose enough water weight in time to really fit into the dresses? And wouldn’t I feel just fabulous if I did — like I had some control over things? Wouldn’t that be a nice change of course?

That, obviously, was crazy talk — the chattering of the monkey mind. Dressing for the contest was an exercise in holding my breath and minding my worst thoughts with discipline and compassion: Blah feel fat blah blah blah. Blah blah lose 10 more pounds blah blah. “It is what it is,” I said aloud to my reflection. As I layered my makeup, I realized that so much of this “being present” business is simply telling the negative voices in your head to shut the fuck up.

I pulled out a red dress with side shirring and lots of stretch. The perfect choice. A red dress says, “I’m here.” My world is falling apart around me, with illness and death at every turn, but I’m here.

Sometimes, despite all the acceptance and gentle-eyed self-appraisal, you put on your best tight-as-you-dare dress to find — discouragingly, irrefutably — that when you walk, your rump looks like two hams rumbling in a sack. Here’s the mindful, radically accepting solution: Wear a fuller skirt, or surrender to Spanx. They make lovely, center-squeezing, cellulite-smoothing fishnet tights. Mind the metaphor: If you feel like you’re exploding in all kinds of uncomfortable directions, there’s a multibillion-dollar industry built around helping you hold it together. Just roll them on, get over yourself, and get to the party. The goal weight — and the water pills and the rice cakes and the Pilates class — will be there tomorrow. And the next day ... and the next. Recapturing your ideal form doesn’t have to slide from the wish list. Acceptance is not the same as settling — it’s simply giving your impossible expectations the evening off. A cloud of hairspray, a red rose pinned into my bouffant, and 6-inch scarlet sequined pumps later, I was cruising through the casino looking like a one-woman prison riot.

I was the shrinking violet in this crowd, though. Satin, corsets, cleavage, high femme fabulosity, butch drag, and gender bending — everyone was bringing it like this was Prom Night of the Damned. The hairdos and hats were so big, the event organizers had to establish a height rule for the showroom. One girl wore a yellow dress with a tutu-skirt and a Swarovski-crystal-bedazzled rubber ducky on her head. We were the beautiful people not because we were so naturally blessed but because we put in the time.

After the contest ended and the winners were chosen, I retired to the casino’s T.G.I. Friday's with the rest of the sparkly rabble and ate the world’s greasiest quesadilla while watching the merrymakers stream by on the way to the after-party. By the time I headed up to my room, it was 5 a.m. — 8 if we’re adjusting for time zones. I doffed my wig, scrubbed off my makeup, and lowered into bed, feeling satisfied and fully alive. In the burlesque world, it’s called “the glitter high.” I got it. Sometimes you just need to get into that full-femme battle rattle and ride the night down to its pathetic, wheezing last. The grave can wait and so, for that matter, can sleep. I woke three hours later, pupils pinned in the beam of Vegas morning sunlight that streamed through the cheap hotel blinds, totally alert and not ravenously hungry for the first time in months, reborn in the Temple of Fake.

Today, as on most days, I opened the closet and ran my hands across the row of Pinup Girl dresses, thinking, OK, cartoony paradigm of feminine appearance, I’ve given you enough. It’s boots and jeans today. I’m shrinking back to my workaday DEFCON level 5 femme. The burly-q swag and the war paint can wait.

But they won’t wait for long, because I can now clearly see that there will come a time when the riotous red-dress occasions are overtaken in quantity by somber black-dress ceremonies. If you know what I’m saying, and I think you do.

Back in the days of my pious punk youth, St. Ian of Fugazi sang, “You can’t be what you were. So you better start being just what you are.” While I never forgot those words, I didn’t really act on them until recently.  Now I feel a sense of urgency as I return to the sentiment again and again, like a mantra or a prayer. Carpe diem, carpe dazzle. Big or little, at our ideal size or far from it, this is the only show we get, no turning back.

There is a spirituality to every kind of theater, and what, I ask you, is more theatrical than a woman doing her best to work it? Costume, makeup, inhabiting a role so thoroughly you’re transformed by it — it’s all there. God’s loving acceptance is a come-as-you-are proposition, but it’s my secretly held belief that every time you step out in something a little flashy, a million glittery angels chorus a resounding “Yes!” Then you peel off the false lashes, get back into your jeans and boots or yoga pants and roll onward, refreshed and inspired by the knowledge that somewhere between God and glamour, grace prevails.

Here’s what I know, this New Year, for sure: Darlings, it’s later than you think. Always. But there’s still plenty of time. Slip the red dress from the hanger. Tuck the silk flower behind your ear. Hide the scale and head out the door. The rest of your one and only life is waiting.

I will if you will.