... or MSNBC? The Qatari network had a rough intro a decade ago and Time Warner -- and others -- won't forget 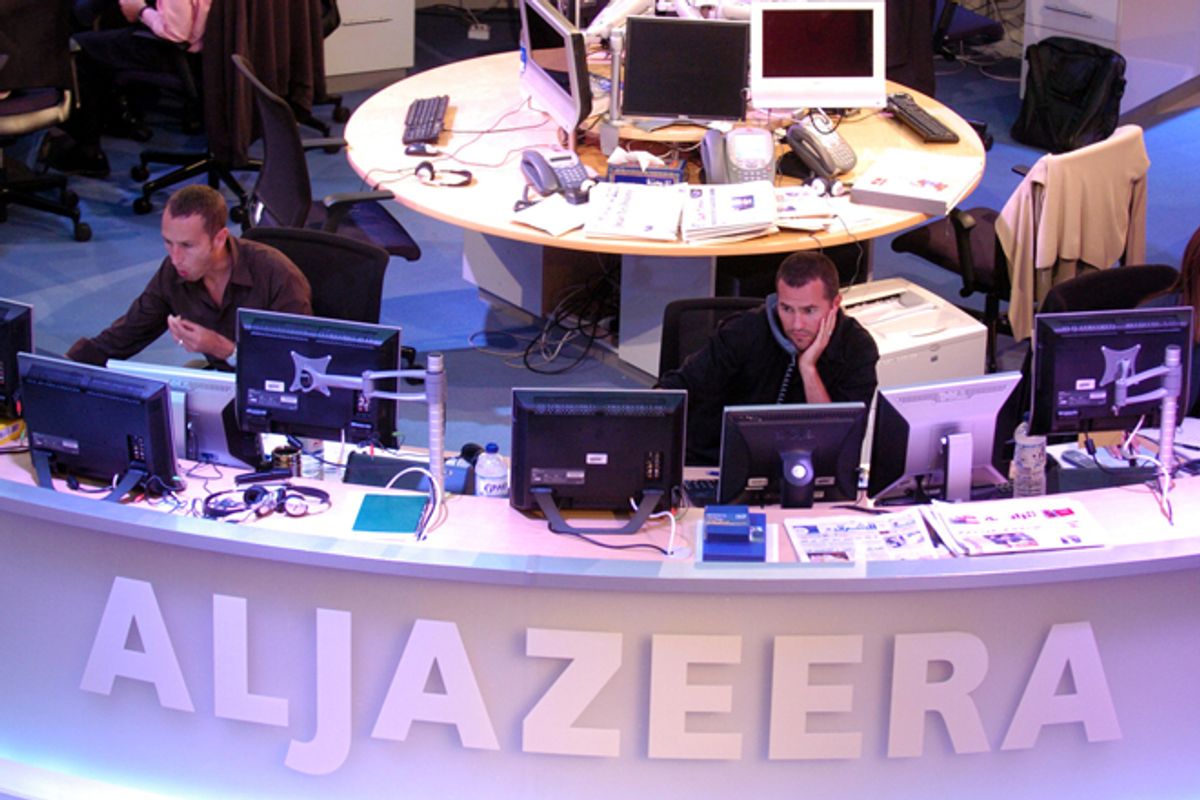 Though the Time Warner decision had reportedly been threatened due to Current’s low ratings, there’s no denying that at least some segment of the U.S. viewing public has long harbored antipathy toward Al Jazeera. An editorial published today by Fox News runs through the talking points about the network it calls “anti-American terror mouthpiece Al Jazeera.” Among them: “Al Jazeera, known as the network of the Arab Street, is also known for taking anti-American, anti-Israel and pro-terror positions.”

As Al Jazeera has sought to reintroduce itself to the American people, it runs up against the first impression it left as the network that obtained and broadcast those endlessly replayed Osama bin Laden confessional videos in the wake of Sept. 11, 2001, back when the network was an Arabic-language outlet only. Consider the takedowns after the 2011 stateside launch of Al Jazeera English, the Doha-based forerunner to Al Jazeera America that aired in scattered pinpoints from Vermont to the District of Columbia. Bill O’Reilly called the network’s lauded coverage of the Arab Spring hopelessly compromised by the network’s ties to Qatar’s royal family, noting that it’d be akin to his reporting on the mob if “I sell narcotics for the organized crime syndicate here in New York City.” Philadelphia magazine, in an open letter to Comcast asking for Al Jazeera English, was compelled to explain: “Content with an Arab perspective is not necessarily anti-American.”

Juliette Kayyem, the national security and foreign policy columnist for the Boston Globe and lecturer at Harvard’s John F. Kennedy School of Government, told Salon that the impression of Al Jazeera as an anti-America, anti-Israel newsroom was misleading. On a visit last month to Doha’s Al Jazeera campus, she noted, the reporters seemed more than anything young, ambitious and innovative. (Failing to break into the U.S. market meaningfully with Al Jazeera English, the network had been streaming through YouTube for interested U.S. viewers.) They were unconcerned about ownership issuing marching orders: “The monarchy knows Al Jazeera is a good brand for the monarchy," said Kayyem. "And the more they mess with Al Jazeera, it's not a good brand.”

Which is not to say that Al Jazeera has magically shed a point of view. “I suspect as viewers get to know the content,” said Al Tompkins, the Poynter Institute’s senior faculty for broadcasting, “they will develop filters through which to watch the journalism, in the same way thoughtful viewers filter Fox or MSNBC and so on.” He cited Britain, Canada, South Africa and Denmark as states whose government-funded networks did good journalistic work.

But, the BBC aside, these states’ networks are not the subject of much discussion in the U.S. Part of why Al Jazeera has become such a valuable brand comes from its coverage of the Arab Spring, the event that moved breaking news in the Middle East away from bipolar conflicts and toward something a bit more complicated and a bit harder to slant. “What is the Arab Street anymore?” asked Kayyem. “At one stage there were revolutionaries and dictators, and Al Jazeera provided the forum for the Street. That’s harder to do with the conflicts that are ongoing now.” She noted that on-the-ground reporting on Egypt of late had presented many citizens’ shades of interpretation to Mohamed Morsi’s elevation to president. “It's a more honest story to tell than how U.S. papers presented it, which is: Here’s another dictator.”

If the conflicts in the Middle East are too multivalent to treat with a simplistic slant, all the better for Al Jazeera’s value as a newsgathering outfit. “Most people in this country don’t pay that much money to international news,” said Brent Cunningham, deputy editor of the Columbia Journalism Review. “If this is available and there's people who come across it and it makes them think or question or challenge their assumptions, that's all to the good.”

That makes it all the stranger, though, that Al Jazeera America reportedly plans to get only 40 percent of its coverage via the international-minded Al Jazeera English; 60 percent will be the sort of original reporting that prompted former AJE anchor David Marash to quit and unburden himself to Cunningham in 2008: “The United States was becoming a serious exception to their role, and a place where the journalism did not measure up to the standards that were set almost everywhere else by Al Jazeera English’s very fine reporting.” He noted that a series on poverty in America was a low-water-mark, trading on stereotypes and conveying little new.

“Their missteps or shortcomings or whatever in terms of the type of things we're talking about are the same things we talk about when we talk about other news outlets. They have their blind spots,” said Cunningham. “It's the same thing that would happen if you or I were dropped in Saudi Arabia. You would almost invariably get some huge things wrong.”

Still, there may be an adjustment period that moves the percentage, if only a little; ironically, the thing that may make Al Jazeera most valuable is not reporting on the matters that most immediately concern Americans, which will only expose blind spots, but taking a broader view. Said Kayyem: “I'm not so interested in Al Jazeera's taste for America. As a watcher of Al Jazeera, I'm more interested in what their journalists in Sierra Leone are doing.”