Can your iPhone help you lose weight? 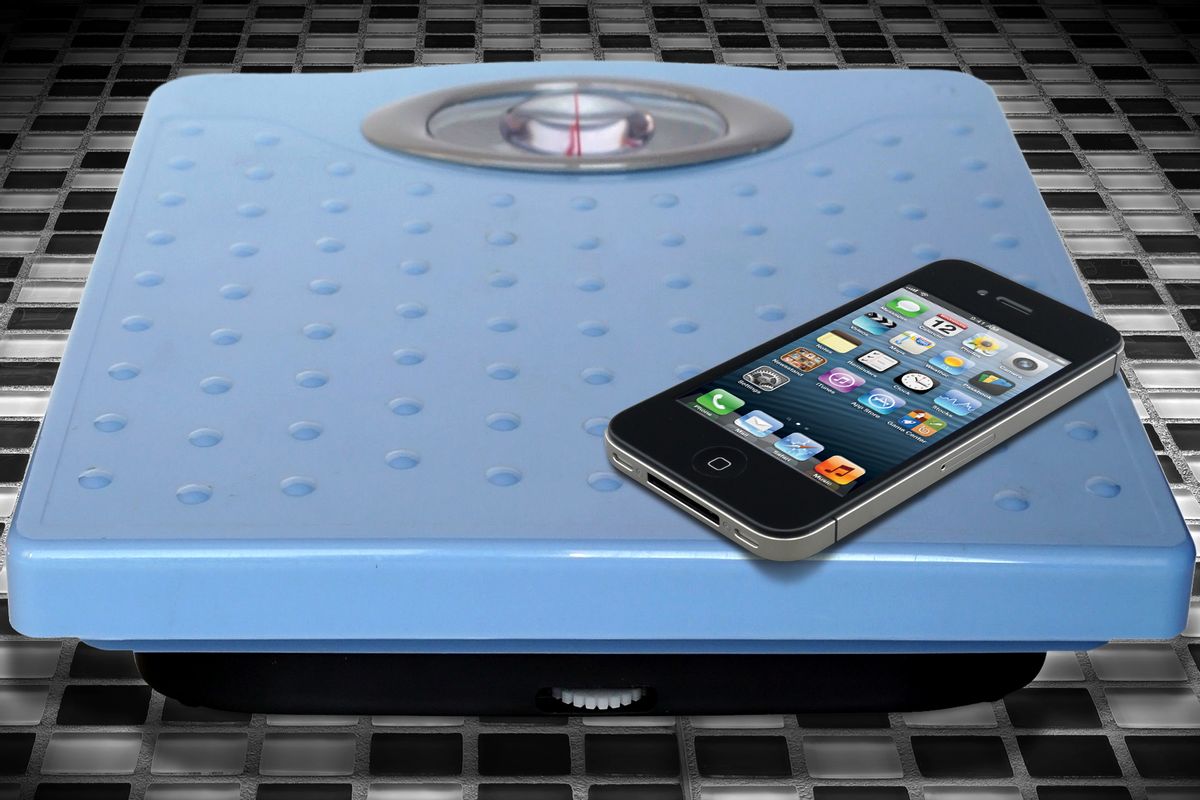 Graydon Carter, the editor in chief of Vanity Fair, weighed in this month on the "Quantified Self" movement. The Quantified Selfers, he tells us, with a hefty serving of snoot, are a "younger growing demographic" of people "who like to record and share every aspect of their lives no matter how inconsequential."

Where past generations had film cameras, scrapbooks, notebooks, and that part of the brain which stores memories, we now have a smartphone app for every conceivable recording need. The thing is, all that time you spend logging and then curating the quotidian aspects of your daily life is time taken away from actually doing things.

There is just so much to unpack in Carter's dismissal, one hardly knows where to begin. There's the dig at current generations, who presumably lack the part of the brain that stores memories. There's the implicit certainty that curating one's life isn't actually doing anything, suggesting that in spending your time logging data you deprive yourself of some greater chance at capturing life's essence. And then there's the sweeping arrogance of the phrase "no matter how inconsequential."

Kids these days and their smartphone apps. Don't they understand there's more to life?

Sure, it's easy to make fun of true Quantified Self believers, strapped to the gills with gadgets measuring every conceivable bodily function, logging data about their sleep and eating habits, their moods and bowel movements, all in the firm belief that "self-knowledge through numbers" will lead to self-improvement. It's hard to imagine a more suitable sitting duck for magazine editors in New York looking for a trend to mock.

But all I could think of as I read Carter's words were the moments I spent leafing through an ancient spiral notebook I discovered while helping my mother pack up her house this past Christmas break. The notebook belonged to my stepfather, and it contained a meticulous, extraordinarily detailed record of every penny he spent while a medical student at Western Reserve University in 1957. No detail was too small to be recorded in his neat handwriting: Under the category of "Recreation" for Sept. 9, 25 cents for "cigs."

Obsessive? Perhaps. But I don't doubt that my stepfather's zealous attention to the whereabouts of his pennies was one reason why by the end of his life -- he passed away last March -- he had accumulated quite a few of them. There is meaning to the minutiae we log. Just the act of jotting something down is an act of discipline that affects how we think about our actions, and bolsters our resolve to modify our own behavior.

The fact that we can now do such data entry with a smartphone is utterly un-noteworthy. The real question -- the question Graydon Carter doesn't bother to address in his drive-by massacre -- is whether we can do such tasks better, or more easily, with a smartphone. One of the founders of the Quantified Self website, Gary Wolf, told me that "the quantified self is an extension of ordinary self-reflection, using new tools." Any time we are self-reflecting, we are not "actually doing things" in Carter's sense of those words,  but that doesn't mean such self-reflection is inconsequential.

Reading Carter's thoughts perversely encouraged me to to find out for myself whether new tools can help with old obsessions in the months ahead. Self -- get ready for some quantification! In 2013 I will dedicate myself to using my iPhone to pursue a goal that I am sure is shared this week by millions of my fellow Americans, whether they are believers in the gospel of the Quantified Self or not. I'm going to see if my smartphone can help me lose some weight.

Yes, yes, I know. Losing weight is simple. Just eat less and exercise more. Don't need an app to tell you that. But it's hardly controversial to argue that simple exercises like weighing oneself on a regular basis and counting calories can focus one's attention on one's diet and exercise regime in helpful ways. We need all the help we can get. As Mark Gerstein, a professor of bioinformatics at Yale who started investigating how attention to his own data affected his behavior, noted, with a nod to Heisenberg, "the act of measurement affects what is being measured." If you have the discipline to log everything you eat and tally up all the calories involved and keep a record, you may be more likely to stick to a healthier diet.

Gerstein found that when he tracked his weight fluctuations, the periods in which he lost weight correlated with the periods when he was most studiously recording what he ate and drank. Mindfulness, then, led to good practice.

But mindfulness is hard. Doing such quotidian things as logging your meals and figuring out how many calories they contain on a daily basis is a huge pain in the ass.

I decided to take Lose It out for a spin. I punched in my height and current weight, chose a weight loss goal, and Lose It immediately saddled me with a daily calorie count that I must stay under, if I want to lose one pound a week until I hit my goal. It was all very seamless. Easy as that pie I am not supposed to be eating.

Next step: logging the meals. And here I ran into an immediate roadblock: For lunch, I had just eaten some leftover spicy Szechwan mapo tofu that I had made myself the night before. I had no idea how to calculate its calories, and when I punched a few variant spellings of the dish into Lose It's search function, I got zilch. (Lose It has a neat feature in which you can scan bar codes on packaged foods to get calorie counts added directly to your daily diary, but that was obviously not going to be helpful here.)

Oh well, I thought, surely, somewhere out on the Web, someone has counted the calories in mapo tofu. That, in fact, is exactly the kind of thing the Web does very, very well. I opened up my smartphone browser and went looking, and was delighted to find a page declaring that MyFitnessPal claimed to have the desired information. So I downloaded the MyFitnessPal app, configured my account with the same basic details, and sure enough, found that MyFitnessPal's search function tapped into a wider database of calorie count information that included numerous suggestions for mapo tofu. (Vegetarian; with beef; with pork; Szechwan style, etc.) Cool. Progress.

Alarmingly, the daily calorie limit suggested by MyFitnessPal to achieve my goals was markedly different from Lose It's. Which to trust? I was also perplexed at the varying answers I got back when I tried to figure out a calorie count for a cup of cooked white rice. (Long grain? Short grain? Basmati? Jasmine?) Inconsistency abounded; I had some doubt as to the accuracy of my serving size calculations, and I have to say that when I finally determined that my lunch added up to about 714 calories I didn't feel a whole lot of confidence in the reliability of my quantification.

But it was pretty darn easy, and I could imagine myself whiling away spare minutes through the day playing with the app and working on my data. I enjoy the easy access, through my touch-screen interface, to the entire world's amassed calorie knowledge. Just the effort of counting calories for one day makes painfully clear, for example, how deadly my favorite vice, Sierra Nevada Pale Ale, is for any kind of weight-loss regimen. A single bottle, MyFitnessApp tells me, adds up to 180 calories!

My experience is hardly unusual, according to Mike Lee, the creator of MyFitnessApp:

Still, one thing stands out, which is that the biggest benefit is education. It’s amazing how little most people know about what they eat or the activities they perform, and once they start using the app, it’s eye-opening. They discover what they eat, how much, how often, the nutritional content of the food, and the impact of physical activity. They build up knowledge that stays with them even if they stop logging their foods. With this knowledge they can make their own decisions about what to change in their lives, what trade-offs are best for them. It’s not following some diet fad, but discovering what works for you.

Lee's quote gets at the essence of the whole Quantified Self movement. Education through self-reflection helps us make decisions about what to change. There will always be people who go too far, and who get lost in their own data, just as there will always be people who never go far enough, who discard their new apps as quickly as they pick them up. To be honest, I'm not sure which category I'll fall into. Will I have the discipline to keep logging my food and drink, and better yet, adhere to the restrictions suggested by my apps? I have no idea. I have attempted many times in the past to record every detail of my spending, and yet never achieved what my stepfather managed for the year 1957.

But then again, it's really never been quite this easy. So maybe this time around, I'll pull it off. And if I do, won't that be doing something? Carrying a few less pounds will lessen the stress on my knees, get me and my bicycle over that hill a little easier, allow me to fit more comfortably in clothes that I would be loath to wave farewell to. All worthy goals, I think -- even if getting to them requires attention to the quotidian. And if my smartphone can help me get there, I'll be the last one to sneer at anyone else's efforts to leverage new technology into greater self-knowledge.