The unemployment rate is holding steady at 7.8 percent, which suggests economic growth is a bit sluggish 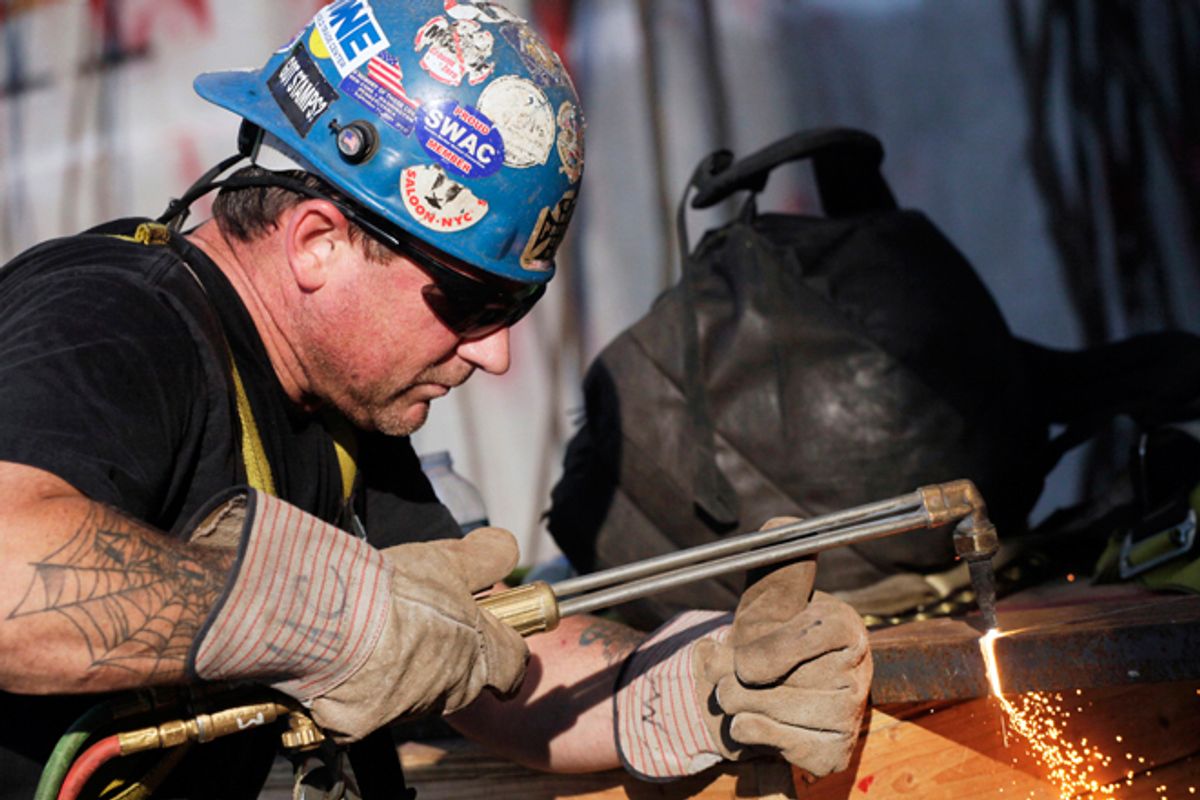 December’s payrolls were up 155,000 and the unemployment rate held steady at 7.8 percent.  Factories and construction sites added jobs — 25,000 and 30,000, respectively — an improvement over recent months.  On the other hand, the public sector shed another 13,000 jobs, driven exclusively by local governments, the continuation of a longer-term negative trend as localities struggle with budget constraints.

Hourly wages and average weekly hours got a bit of a bump up as well, so weekly earnings are up 2.4 percent over the past year.  Since inflation recently has been tracking at around 2 percent, that’s a slight gain in real pay (important, because starting this month, most workers will take a 2 percent hit to their paychecks due to the expiration of the payroll tax break, a casualty of the fiscal cliff deal).  There was also some evidence of more folks moving from part-time into full-time jobs.

The main, first-take point here is that this is a glass-half-full-glass-half-empty jobs report, and more broadly speaking, job market.  In the near term, market and political volatility over the recent fiscal craziness is not particularly evident in the job market, which has been moving along at about a trend growth rate.  Uninspiring, and not fast enough to provide the opportunities we need, but steady and pretty resilient to everything from congressional wound-infliction and hurricanes.

Over the longer term, say, the last two years (2011 and 2012), employment averaged about 150,000 jobs a month, or 1.8 million jobs added in both those years.  That’s enough to slowly open up job opportunities for the unemployed and to absorb new labor force entrants.  But the key word is “slowly.”

The figure shows this steady-as-she-goes point by plotting year-over-year growth starting in 2009 (so the first data point is payroll levels in December 2009- those in December 2008).  You see job growth climbing out of the recession and settling into the current trend toward the end of 2011, where we’ve stayed since.

Historically, following a deep recession like the one we went through, you’d get months with much larger gains than we’ve seen, thus closing the jobs gap and bringing down the unemployment rate more quickly.  That hasn’t happened, in no small part because policy, which responded quickly and forcefully to the downturn, petered out too soon.  We prematurely pivoted to austerity — not European-style, but still — and that’s hurt our ability to climb back faster.

Still, we’re growing at a steady pace and the last thing we’d want to do is screw around with the debt ceiling … right? … right?? … anyone??? … Bueller?