GOP: The clowns are in charge

Why is John Boehner smiling? His conservative wing is terrified of the House's crazy and charlatan caucus 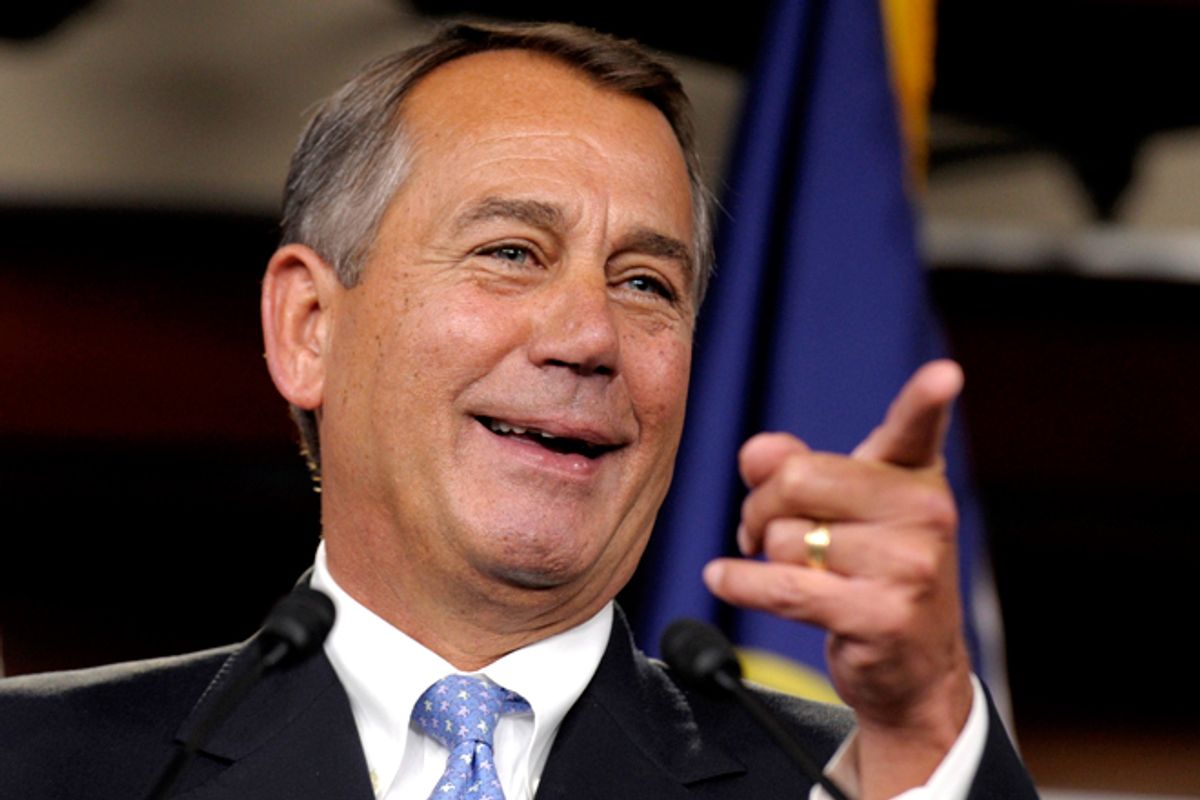 Alex Pareene had a very nice piece this week about the responsibility Northeast Republicans such as Chris Christie have for the very Republican craziness that prevented Sandy relief from passing the House of Representatives in the final days of the 112th Congress. He’s right, but there’s a group that's even more responsible: sane conservatives.

That’s the lesson of the fiscal cliff end game – and of the pathetic "revolt" against John Boehner. In fact, it’s a reminder that the key hostage game in Washington isn’t that Republicans are threatening the nation’s economy over the debt limit. It’s that mainstream conservatives have allowed themselves to be taken hostage by fools and clowns.

The obvious truth about the Republican Party right now is that the tail is wagging the dog. The party’s dynamic, repeated again and again, is that everyone is afraid of being a called a RINO –  a Republican in name only -- and everyone accepts the ability of a few goofballs and a bunch of media hucksters to define what “real conservative” means.

That’s produced a completely dysfunctional party, and in turn it’s making the United States increasingly difficult to govern. Even when there’s an obvious, easy compromise to be had – as there was on the fiscal cliff – Republicans have the most convoluted time reaching that deal because a handful of people have decided that compromise itself is against their principles. And worse, the sensible people in the party are terrified of them.

This is exactly the opposite of how normal parties operate. Normally, in a two-party system, both parties have strong incentives to move to the middle, since that’s where the votes are. That can be extremely frustrating to ideologues! Centrist members of Congress, as a result, often appear to have disproportionate influence. That’s not only because they can threaten to work with the other party, or that they’re well-positioned for making deals with the other party. It’s because most politicians concerned with reelection want to appear fairly close to the center.

For Democrats, what winds up happening is that the most moderate group doesn’t want to vote with the most liberal ones, and then the mainstream group wants to at least sometimes vote with the moderates and against the extreme. The check against that is the nomination process, which pushes politicians toward the party's base (sometimes a bit farther, since primary electorates are farther from the center than are all party identifiers). Overall, there’s a balance, but it tends to favor the center.

What’s happened with Republicans is basically the opposite; they’ve become overly focused on nomination and, even in statewide elections in tough states such as Delaware and Nevada, they undervalue -- and lose -- general elections.

If that was the entire story, we would simply have an unusually ideological and conservative Republican Party. From a conservative point of view, it might even be well worth it to sacrifice a few general elections in order to push everyone who does win toward loyalty to conservative causes.

But it isn't the end. Instead, what’s happened is that mainstream conservatives have allowed the Michele Bachmanns and Louie Gohmerts and Tim Huelskamps – and the Glenn Becks and Rush Limbaughs – to define “real” conservative ideas. And those folks aren’t really more conservative than, say, John Boehner or Mitch McConnell; they're just shills and hucksters, either because they really believe a lot of nonsense or because it’s in their interest to peddle it to other chumps. Indeed: on the media side, and probably on the politician side, there’s a strong incentive for them to constantly differentiate themselves from other conservatives so that they can set themselves up as insurgents against an “establishment.”

The problem isn’t the Gohmerts and Bachmanns – it’s the perfectly sane, very conservative members of Congress, probably at least half of the House GOP, who are so afraid of epithets such as “establishment” and “RINO” that they allow themselves to be easily manipulated by the clowns. These folks have absolutely first-rate conservative credentials but aren’t willing to stand up for them against cranks and charlatans. Even though they presumably know that having a Democrat in the White House means they’ll have to cut deals at times. That there’s no plot to impose Islamic law on the United States. That Barack Obama is actually an American citizen. That forcing the United States government to default would actually be a bad thing. And this: that as much as they would wish it, not every conservative idea is overwhelmingly popular.

The consequence of all this is pretty simple: a dysfunctional, unpopular Republican Party. Which is (in my view) bad for the nation as a whole but is without question bad for solidly conservative Republicans.

You would think they'd do something about it. So far, though, I don’t even see a faint sign of it.