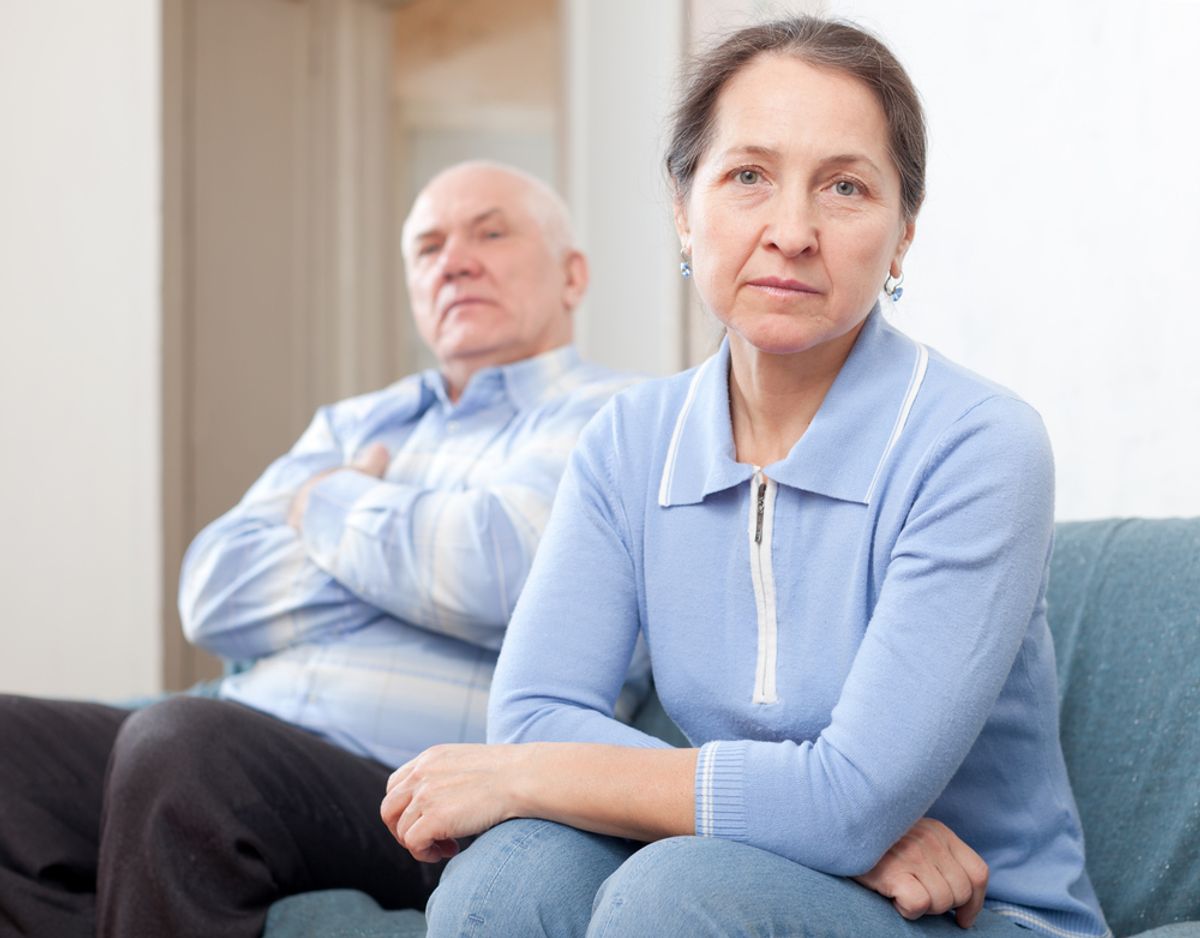 his article originally appeared on AlterNet.

A recent poll revealed a clear tendency to blame women for not keeping their husbands happy and a habit of viewing divorced women as unwanted and pitiable.

That was in the United Arab Emirates. But what about the United States of America? You’d think a more enlightened view of women and marriage might prevail.

Think again. The Huffington Post ran a front-page piece just this week with a headline that would make any old-school patriarch proud: “Women: Five Reasons Your Divorce Is Your Fault.” The author, self-appointed intimacy expert Laura Doyle, spent several paragraphs hectoring women for sins including “Taking the same approach at home as you do at work” and “Rejecting his efforts to make you happy.” She reserves special scorn for present-day Lysistratas who are cruelly “withholding sex” from their partners, as if they were using sex as a punishment rather than simply too tired or not aroused enough to want it. Doyle’s “remedy” for this transgression? “Consider making yourself available for sex at least once a week in support of your mutual goal of connecting.” Problem solved!

Yes, it appears that right here in 2013, somebody is paying Ms. Doyle to expound on the following fantastically stupid credo: “I teach intimacy skills, but not to couples and not to men. I only teach them to women because we are the ones who have the power to make our relationships intimate.”

In Doyle’s binary universe, wives are tasked with creating intimacy in the home and men are emotionally deficient beings who require their guidance. This is a 21st-century redo of the famous “Angel in the House” motif common in Victorian culture, in which women were meant to radiate moral purity and emotional balance for men who were off dealing with the slings and arrow of the outside world. By criticizing women for bringing work skills and attitudes into the home, Doyle reveals her nostalgia for the days when women were financial dependents in marriage. “If all we've ever been taught is how to get ahead in school and career,” she moans, “but not how to foster intimacy, it's pretty hard to change hats when the work day is done and we want a loving, supportive home.” Apparently keeping a roof over that loving, supportive home is an afterthought.

Finger-wagging at women usually comes along with the oft-cited statistic that women file for divorce twice as often as men. What we hear less often is straight talk about the social and economic factors that drive the engine of divorce. The fact is that college-educated people are more likely to stay together, and there’s a higher risk of divorce for people with lower incomes and less education. When people are struggling to pay the rent and keep a roof over their heads, the marriage problem isn’t likely to be some kind of deficiency in managing intimacy. Given the fact that divorce is expensive and often leaves women financially insecure, the stressors would have to be pretty severe to lead women of few resources to divorce.

A recent study found little difference in the way low-income and high-income people think about marriage – they have similar romantic standards and experienced the usual range of problems, with this major difference: Low-income respondents in the study were more likely to be affected by economic and social issues like financial struggles, alcohol and drug abuse.

So instead of playing the blame-and-shame game, perhaps Doyle’s time would be better spent thinking about how to make the lives of lower-income people better and more financially secure.

And even among the more affluent, blaming women (or men) for divorce ignores the realities of modern life.

In Hopi Indian culture, a woman could divorce her husband by simply placing his belongings outside the door to indicate that he had worn out his welcome. In the Western world, it hasn’t been so easy.  Divorce was all but impossible from 1000 until around 1800. But most marriages during that period only lasted a decade or two at the most. Why? Because people died. With longer lifespans, you could no longer count on death to separate you from a spouse. You had to look to the law.

When I think of what people went through before the legal option of divorcing was available – shackled to spouses who may have been violent, abusive, incompatible, criminal; people who seemed to be one person at the altar and then morphed into something utterly unexpected later, I feel a cold shudder. But the Laura Doyles of the world still insist that staying together in a marriage is the outcome to be wished for in nearly all circumstances. It never occurs to them that human beings have only recently been involved in the experiment of staying together over period of up to 50 years or even more – trying to keep a marriage going long after children have been raised. With the vicissitudes of modern life, from relocation to job insecurity and harmful work/family balance trends (particularly in the U.S.), not to mention the sheer passage of time and divergence of personalities and interests, the idea of a one-size-fits-all-forever union ought to be recognized as unrealistic for many. For some couples, the marathon marriage might make sense, and good for them. For others, the benefits of separating when a marriage no longer works clearly outweigh the costs of staying together.

In Mexico, some forward-thinking people have been studying ways to break free of the “til death do us part” mandate of marriage and propose more reasonable, flexible arrangements. In 2011 Leonel Luna from the leftist Party of the Democratic Revolution proposed a bill to make it easier for couples to divorce if things don't work out in the first two years – the time when most divorces occur. Luna has cited the horrific costs of legal battles and the acrimony they cause as good reasons to think about a different approach. The idea is that couples would sign a marriage contract that would last two years, with the option to renew. The contract would specify details of property ownership and child custody, offering children protection that doesn’t happen in less formal arrangements. Naturally, the Catholic Church in Mexico hated the idea, almost as much as it hates gay marriage. The bill hasn’t passed, but at least a conversation that acknowledges the reality of modern marriages has begun.

The Catholic Church and other conservative religious bodies are also opposed to no-fault divorce in which the dissolution of a marriage doesn't force one spouse to blame the other for a breach of the marital contract. The Church wants to go back to a time when churches largely determined the course of family life. But the advantages of a non-adversarial option for divorce are too apparent to most sensible people, and no-fault divorce has been available in all 50 states in the U.S. since 1985. After that, legal fictions no longer reigned in courtrooms where one spouse had to prove the fault of the other. A 2004 study by Stanford Business School discovered fascinating facts about how no-fault divorce impacted women:

Researchers concluded a key driver of these trends was that men were encouraged to behave better because they knew it would be easy for their spouses to divorce.

As we've seen with gay marriage, attitudes toward the institution are changing and slowly adapting to the realities of modern life, no matter what the Catholic Church and the Laura Doyles have to say about it. For women still facing stigma and blame in divorce, let's hope we can speed the process.

Lynn Parramore is an AlterNet senior editor. She is cofounder of Recessionwire, founding editor of New Deal 2.0, and author of 'Reading the Sphinx: Ancient Egypt in Nineteenth-Century Literary Culture.' She received her Ph.d in English and Cultural Theory from NYU, where she has taught essay writing and semiotics. She is the director of AlterNet's New Economic Dialogue Project. Follow her on Twitter @LynnParramore.