The conservative movement is still an elaborate moneymaking venture 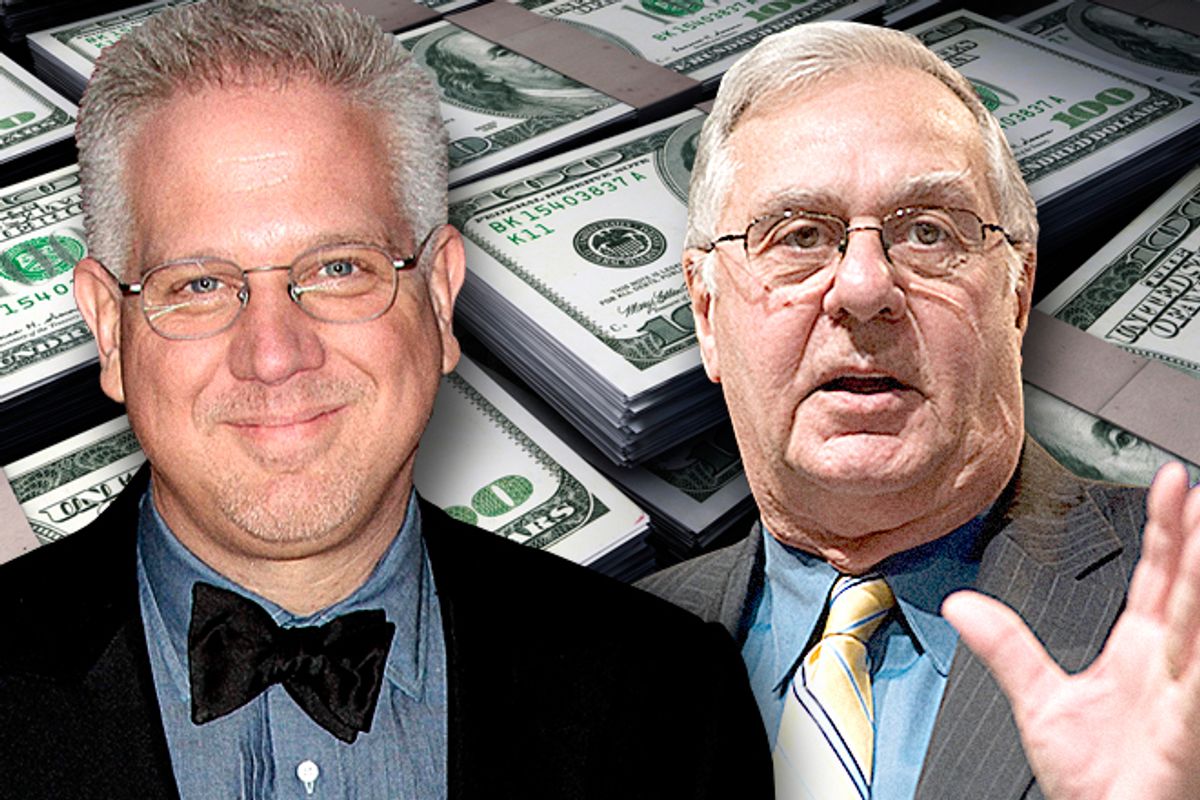 The conservative media movement exists primarily as a moneymaking venture. As Rick Perlstein explained in the Baffler, some of the largest conservative media organs are essentially massive email lists of suckers rented to snake oil salesmen. The con isn't limited to a couple of newsletters and websites: The most prominent conservative organizations in the nation are primarily dedicated to separating conservatives from their money.

FreedomWorks, which is funded primarily by very rich people, solicits donations from non-rich conservative people. More than 80,000 people donated money to FreedomWorks in 2012, and it seems likely that only a small minority of those people were hedge fund millionaires. And what are people who donate to this grass-roots conservative organization funded mostly by a few very rich people getting for their hard-earned money? In addition to paying Dick Armey $400,000 a year for 20 years to stay away, FreedomWorks also apparently spent more than a million dollars paying Glenn Beck and Rush Limbaugh to say nice things about FreedomWorks, in order to convince listeners to send FreedomWorks money that FreedomWorks would then give to Limbaugh and Beck. It's a pretty simple con. Beck, meanwhile, also has a subscriber-based media operation, in which people pay his company money for access to programs where Beck expresses opinions that he was paid to hold. He also spent years telling everyone to buy gold from a company that pays him and defrauds consumers.

As Armey admitted to Media Matters, FreedomWorks at this point essentially raises money for the sake of raising money. It exists to bilk "activists." Armey at least has the courtesy to be embarrassed by this:

"If Limbaugh and Beck, if we were using those resources to recruit activists and inform activists and to encourage and enthuse activists, that's one thing," Armey explained. "If we are using these things to raise money; one, it's a damned expensive way to raise money; and two, it makes raising money an end on to itself not an instrumental activity to support the foundation work that our organization does."

Armey also said the relationship with Beck expanded to include rallies that were co-sponsored by Beck and FreedomWorks, and included appearances by FreedomWorks President and CEO Matt Kibbe.

Armey said he objected to these events, dubbed FreePACs, because they often charged admission to FreedomWorks activists.

A review of promotional information for the events found $20 was a standard donation requested at some of the locations, while a Dallas, TX., FreePAC last summer charged prices as high as $971.

But Armey is basically alone. No major right-wing media figures ever speak out against the widespread practice of constantly bilking credulous old people. Newsmax, a company whose email list is regularly given over to blatant get-rich-quick scheme hucksters, publishes basically every major and minor conservative columnist (and Lanny Davis). Newsmax pays to syndicate their columns, and their stature lends the site credibility. None of them ever complain. No one on the right criticizes the Newsmax business model. It seems to be semi-common knowledge that major conservative media figures sell their endorsements. No one says it's deceptive. No one says Dick Morris should stop marketing his various ventures on Fox, all the time.

This complete contempt for the audience is unique to the right-wing press -- if the Huffington Post made its money selling snake oil, liberals would complain. The recent trickle of complaints about the major nonprofit money-making groups, like FreedomWorks and CrossroadsUSA, has come solely because those groups failed to win the election. If Romney, or even a couple of Senate candidates, had won, no one would mind that the two groups enriched their boards of directors on the backs of tens of thousands of small donors. Right-wing reaction to Armey's admission to Media Matters has thus far been outrage ... that Armey talked to Media Matters.

The problem this presents for the movement, beyond the threat of eventually bankrupting the people who give it power, is that the business of money-making, for consultants and media personalities and Herman Cains, is at this point getting in the way of the business of advancing conservative causes. The groups exert massive influence, and they only ever push the Republican Party to get more extreme. Apocalyptic hysteria is much more effective at getting people to open their wallets than reasonable commentary. There are a lot of people whose livelihoods depend on keeping lots of conservatives terrified and ill-informed. The groups that exist to raise funds raise more funds when they endorse the crazier candidate.

So even if you don't particularly care that regular conservative Americans are constantly being scammed by their media apparatus, you should still worry about the influence of the scammers. The fact that there is a lot of money to be made in acting like Michele Bachmann is part of why the House seems poised to blow up the U.S. economy. The fact that conservatives have that much contempt for their own true believers neatly explains how they govern when they actually have power.