America's favorite joke is anything but funny 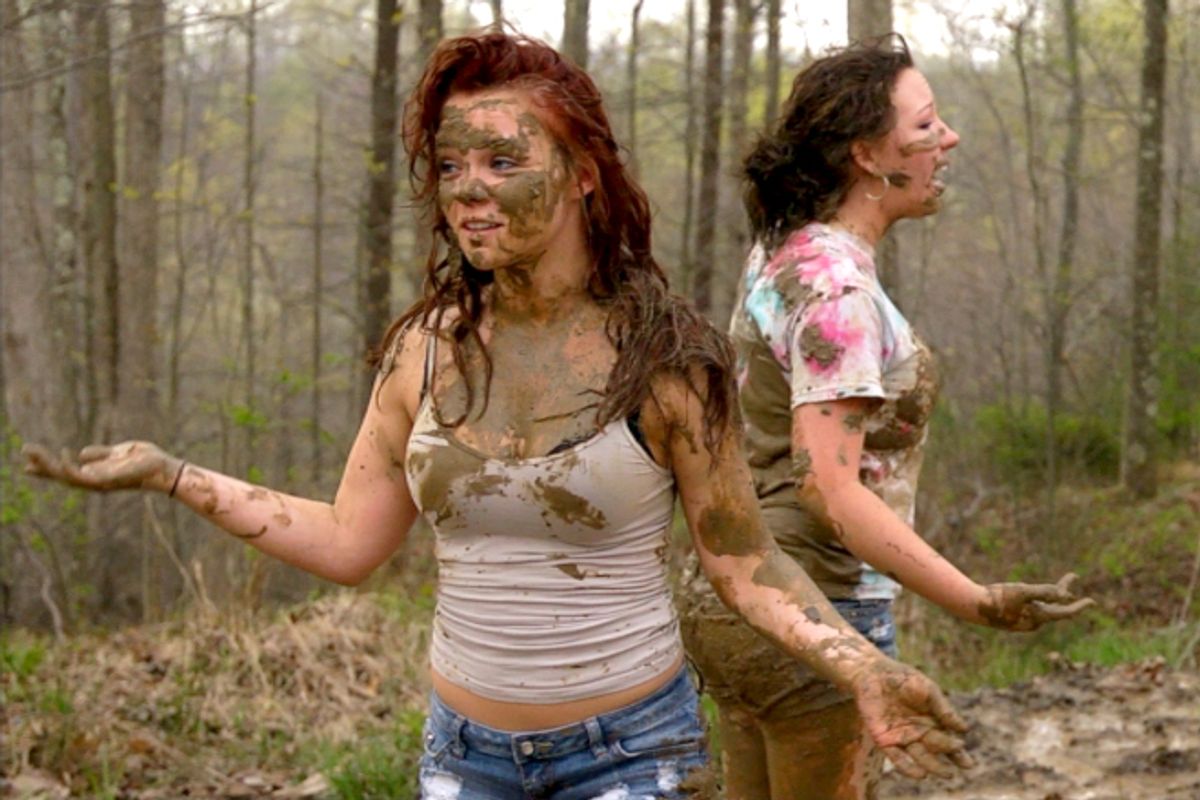 On the night before the premiere of their new MTV reality show “Buckwild ” — which aired last Thursday — Shain Grandee and Kristina Shae Bradley appeared as exotic guests on “Late Night With Jimmy Fallon.” Grandee offered Fallon a glass jar of deer meat. “Killed it myself,” Grandee explained. “We skin it and process it all at the house and everything.”

“Weirdest coincidence. Common [the previous guest] brought me the same gift,” joked Fallon, before asking what he was supposed to do with the meat. Grandee said, “Heck, you can just get a fork and eat it right out of the jar, if you want to.” Fallon dropped his face into his hands and shook his head at the thought of it. But when the slowly escalating cheers from his studio audience reached a fever pitch, he unscrewed the lid, stuck his finger cautiously into the jar, and gave the crowd what they wanted.

Grandee bolted out of his seat with his arms over his head and unself-consciously screamed, “Wo-o-o! That’s awesome!” But his stylishly dressed friend and costar remained seated uncomfortably with her legs crossed, clearly preoccupied with how she was being perceived. Fallon asked her about the predictable controversy surrounding the series, the claim from former governor and current Sen. Joe Manchin that the program, which shows her group of nine friends riding ATVs, “mudding” and pursuing other creative forms of low-cost fun, perpetuates negative stereotypes of Appalachians. She had quickly responded to the same question on at least two other shows by saying that she represents only herself and not an entire state. But, in this moment, nothing came out. She looked sad and thoughtful, like an animal suddenly realizing that it’s not a peer, a friend or a community member — it’s lunch.

Grandee and Bradley represent something important — but not the people of West Virginia or Appalachia writ large, many of whom are similar to the kids of “Buckwild” and many of whom read the Economist, frequent gay bars, and play racquetball, just like many of us. Grandee and Bradley represent the two faces of exploitation, the ways in which someone without any cultural capital can respond to media bullying. When pushed into the dark reaches of a corner you had no idea you were entering in the first place, you can reflexively embrace your caricature, as Grandee is doing, or fight against it, in the tender, vulnerable and, ultimately, false hope that the bully will take you on as a peer. On “Late Night,” Fallon brought up the ridiculous captions that appear on the show whenever Grandee speaks, so MTV’s cosmopolitan audience can access this alien creature. Bradley laughed and said, “Sometimes it’s even hard for me to understand him.”

Cultural persecution and its social psychological effects are nothing new to the hardworking and hard-suffering people of West Virginia, who have lived through the same internal split in the past. Before “Buckwild,” there was "Saturday Night Live’s" “Appalachian Emergency Room,” a comedy routine in which blood spurts from the wounds of rural mountain people rushed to the E.R. with occupational injuries. (Chopping wood to warm the children in your unheated house can be quite dangerous … and hysterical!)

In 2003, CBS hoped to offer the reality show “The Real Beverly Hillbillies,” in which a family from a disenfranchised region would be paid to move into a Beverly Hills mansion for a year. Kentucky’s Center for Rural Strategies placed critical ads in several metropolitan newspapers, and the show was canceled before it aired, but the concept reemerged as the failed documentary “The True Adventures of the Real Beverly Hillbillies.” NBC tried again in 2004 with “The High Life,” but the pilot was never purchased, for “creative reasons.” Nevertheless, that same year Abercrombie and Fitch sold plenty of their $25 “It’s All Relative in West Virginia” T-shirts. Even high-quality programs seem to assault the region: PBS Frontline’s “Country Boys,” in 2006, and ABC's "20/20" segment, “Children of the Mountains,” in 2009, were both serious attempts to draw the nation’s attention to the reality of Appalachian poverty, but both ended up exaggerating underlying stereotypes through their salacious choice of subject matter, which included what is now unfortunately known as “Mountain Dew mouth,” tooth decay in children who drink sugary sodas without regular dental care.

The proposed content of “The Real Beverly Hillbillies” led U.S. Rep. Harold Rogers, R-Ky., to say, “No one would dare propose creating a program focusing on stereotypes about African-Americans, Muslims or Jews … Why then would it be OK to bash those of us living in rural America?”

Of course, we all know why. Suffering people are so entertaining. There’s nothing more humorous than decades and decades of exploitation at the hands of the coal and natural gas industries, both of which have ravaged the landscape and choked its people in miserable jobs, hundreds of dark miles beneath the Earth’s surface. We love to chuckle at insurmountable educational challenges, like the fact that, in 2007, only 17.3 percent of people age 25 or over in West Virginia had a bachelor’s degree, the lowest rate in the nation. The lack of basic healthcare in some regions, the aging population, the weight management issues, the diabetes, the heart disease, the mesothelioma, the routine chemical spills, and the poisoned drinking water are pretty funny. Household incomes from 2007 to 2011 that are $13,000 lower than the national average and 17.5 percent of the state’s population below the poverty line — riotous. And what’s more laughable than, as of 2010, the ninth-highest teenage birthrate in the country?

Of course, these aren’t the reasons why MTV and Viacom executives decided to air “Buckwild.” The program never shows this reality. What the program does show are the ways in which Appalachian folk are superficially different than sophisticated urbanites: Appalachian people talk differently, have different hairstyles, live in different kinds of homes, and drink and eat different stuff. They ride in excavator shovels and make swimming pools out of dump trucks, as we saw in the series’ debut.

We’re getting this limited view of Appalachia for two reasons: First, so we’re insulated from the region’s genuine needs. According to MTV’s caricature, Grandee and Bradley don’t need us. They’re perfectly happy. In fact, MTV would have us believe that the kids of “Buckwild” are free and creative in ways that alienated, urban kids with cellphones will never be. But there are deeper reasons why Grandee says: “I don’t have no phone. I don’t have a Facebook. I don’t have none of that Internet stuff.” If we were to interrogate those reasons, we would have to care about him and help him. And that’s no fun.

The second reason for the incomplete caricature is deeply psychological. The non-Appalachian viewing audience needs this manufactured other, in order to see itself as sophisticated and cosmopolitan — as better. Bradley and her more urban peers seem to need their “country boys” in this way as well. Without the foil, we would have to face our own poverties, our own barbarism, our own shelteredness, our own actual lack of sophistication.

MTV claims “Buckwild” will show young, urban viewers that they spend too much time on their phones texting their friends, instead of playing outside with them. But a more authentic show about urban alienation would spend a few months filming urban babies, as they sit in mechanical swings in institutional settings for hours at a time, while their daycare workers and nannies take well-deserved mental breaks from their underpaid jobs. The series might present a couple who bought a second home to host vacationing friends, but then reads the New York Times Home section to learn the artful ways of getting them to leave early. It might show us washing the dirt out of our fingertips and off of our cheeks at the end of every workday; painting, lathering and scraping our faces to match fully unnatural pictures in ads hoping to sell us paints, lathers and scraping procedures; or paying hundreds of dollars to a gym, just to move our bodies. Of course, that’s no fun either.

Though some commentators feel “Buckwild” will attract tourism to an otherwise mysterious state and some feel there is a limit to the damage a mere television show can do, the caricature MTV has manufactured for West Virginia will leave a long-lasting hurt, for it will dissuade external talent from settling permanently there. Instead of establishing homes in Appalachia, where their heirs will grow up and raise families, external business, scientific and educational leaders will either stay away completely or continue to run their West Virginia interests from other states, where they can live among wealthy, sophisticated people and where they can send their kids to schools without that buckwild element.

But the greatest damage will fall upon the basically sweet, young cast members, who, like all reality stars, have unwittingly surrendered their right to reinvention. Unlike the rest of us, who were free to leave our untelevised high school and familial personas behind once we grew up, Gandee and Bradley will have to live forever in the boxes MTV has created for them — long after they might realize that their audience never really liked their manufactured personas. Unlike MTV’s “Jersey Shore” cast members, who one might say are in the same situation, the “Buckwild” kids are bound to feel even lonelier and more conflicted about themselves, as their starting point was far more culturally and economically isolated than the Shore, a mere train ride away from the largest city in the nation.

As Fallon remarked, after he actually experienced the deer meat himself, “It’s like a stew of sorts, a little gamey, got a little taste to it there.” It was unfamiliar, but he liked it. On the premiere last night, Joey Mulchy, another “Buckwild” cast member and a genuine friend of Gandee’s, said: “We’re two of the coolest guys you’ll ever meet.”