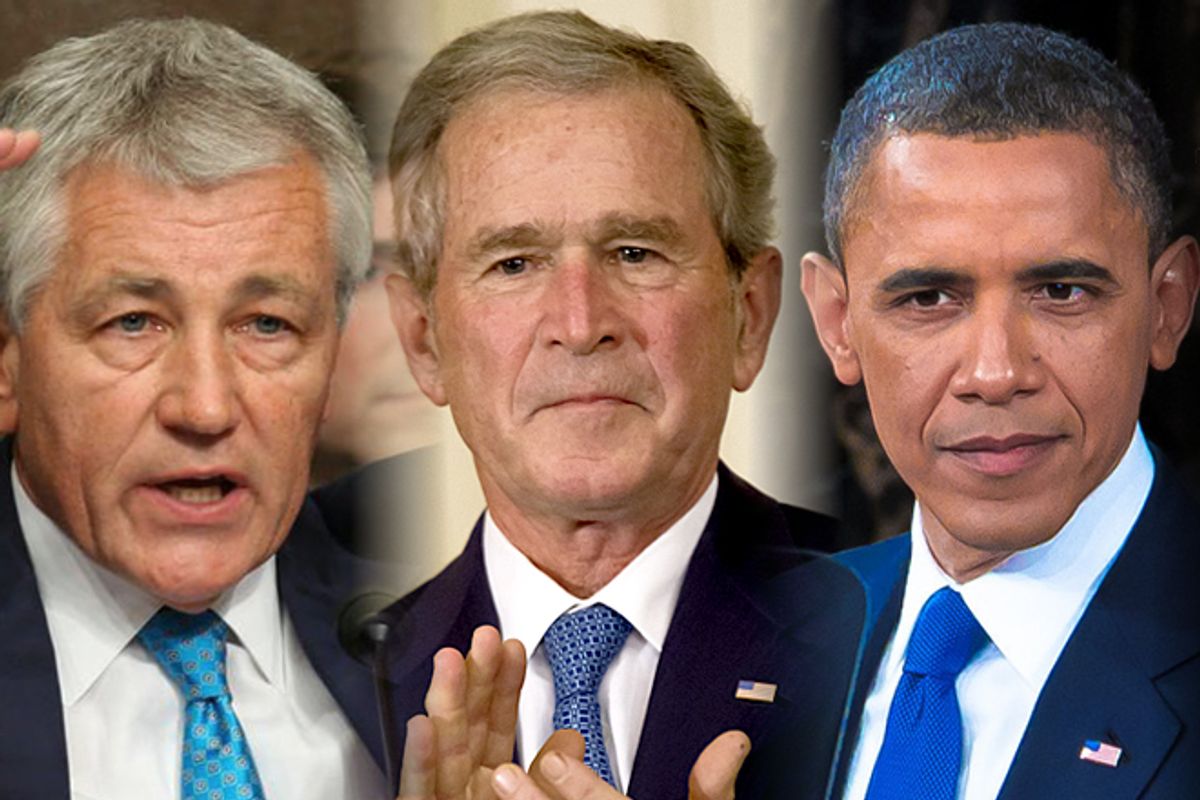 Barack Obama was elected in 2008 to be the anti-Bush — the anti-George W. Bush, that is. In economic policy, Obama’s success in raising taxes slightly on the richest Americans is of symbolic importance, far beyond its substantive effects, as a repudiation of Bushonomics. By nominating former Sen. Chuck Hagel to be the next secretary of defense, Obama is continuing his ongoing repudiation of Bushism in foreign policy, as well.

Obama has been called an “Eisenhower Democrat.” Nowhere has this been more true than in the president’s foreign policy, which is close to that of moderate Republican realists like the first President Bush, Colin Powell (who endorsed Obama), and Obama’s first secretary of defense, Robert Gates. When Gates replaced Donald Rumsfeld, during Bush’s second term, it marked a major shift even before the 2008 election.

By winding down the failed wars in Iraq and Afghanistan, by “leading from behind” in NATO’s air war in Libya, and by avoiding intervention, to date, in Syria’s civil war, Obama has reversed his predecessor’s neoconservative foreign policy in both substance and style. Even Obama's morally and constitutionally questionable reliance on drones puts him in the tradition of cautious Eisenhower Republicans. President Eisenhower himself preferred using the CIA to orchestrate coups, in places like Iran and Latin America, to doing nothing or sending troops. What spooks were to Ike, drones are to Obama.

At the same time, there are important elements of continuity between W.-style neoconservatism and Obama-style pragmatism. Both schools share a commitment to perpetuating U.S. military hegemony in every region of the world as long as possible. Both agree that a world in which the U.S. is not the major European and Middle Eastern power and in which the U.S. Navy is not the strongest force in the western Pacific would be unthinkable.

The difference among the neoconservative and pragmatic hegemonists has to do with the purpose of U.S. hegemony. A decade ago, many neoconservatives argued that the goal of U.S. hegemony should not be stability but “democratic revolution.” Like Napoleonic France, the world’s only superpower should use its might for the purposes of “democratization” from above and nation-building.  This vision of the U.S. military as an agent of global social reform was shared by many progressive “humanitarian hawks,” who, following the debacles in Iraq and Afghanistan, have mostly fallen silent.

Moderate Republican pragmatists like Hagel, Gates, Brent Scowcroft and Powell -- and evidently our Democratic president -- see the maintenance of stability under benign U.S. global hegemony, not the promotion of global political or social reform, as the purpose of American hegemony. They are not against democratic revolutions, like those sweeping the Arab world, but they do not view American soldiers as missionaries with guns.  For them, Uncle Sam should be a status quo hegemon, a security guard protecting the global neighborhood, not a radical seeking to revolutionize it.

In the 1950s, Eisenhower sought a “New Look” in strategy partly in order to minimize spending on the military-industrial complex, compared to what the more ambitious Truman (and later Kennedy-Johnson) versions of Cold War containment required. In the same way, the more modest, stability-oriented version of American global hegemony associated with moderate Republicans and now with Obama Democrats promises to save money in the Great Recession era of budgetary constraint.

Coming after the disastrous hubris of the George W. Bush administration, the more cautious foreign policy of Barack Obama is to be welcomed. But the Obama version of what the political scientist David Calleo calls “hegemony on the cheap” is likely to be a transitional strategy, not the beginning of a new era in U.S. foreign policy. The reason is that the military and economic underpinning of the strategy of U.S. global hegemony, even in its prudent, cost-conscious version, have eroded.

Under George Herbert Walker Bush and then Bill Clinton, post-Cold War American leaders sought to expand America’s Cold War alliance system into a permanent structure of U.S. global hegemony. During the Cold War, the U.S. offered to provide unilateral military security to (West) Germany and Japan, in return for their agreeing to foreswear independent national security policies and to concentrate on civilian industrial production. Following the Cold War, the U.S. implicitly offered a version of the same deal to post-Maoist China: Concentrate on manufacturing for export, and we will police the sea lanes on which you depend. Of the three major industrial economies of the world, the largest — the United States — would spend far more on the military, in absolute and proportional terms, in order to protect the interests of the next three biggest industrial nations — China, Japan and Germany — so they could concentrate on economic growth.

What doomed this post-Cold War Pax Americana was the insistence of first Japan and Germany and later China on running chronic merchandise trade surpluses. This required other countries, including Germany’s European neighbors and the U.S., to run perpetual trade deficits, in order to absorb the excess production of Japan, Germany and China. Because the export-oriented economies of those three nations depended on the artificial suppression of wages and consumption within their borders, the dollars (and, in the case of Germany, the euros) that their exporters accumulated as a result of the trade surpluses did not go to buy imports from America and other countries, but instead were recycled, often in the form of unrepayable debts that clogged up the arteries of national banking systems and contributed to the global financial crisis of 2008.  The toxic interaction among these national economies is explained brilliantly and in depth by Yanis Varoufakis in "The Global Minotaur" and by Michael Pettis in "The Great Rebalancing."

The Great Recession, in other words, can be viewed as an unintended consequence of the Pax Americana, in which the U.S. agreed not only to provide free security to the most important other industrial powers but also to run perpetual trade deficits to benefit the civilian manufacturers of Japan, China and Germany. The post-1989 system of American global hegemony, then, had both a security component and an economic component. Both components have experienced catastrophic failure. The failure of American military power in Iraq and Afghanistan has thrown America’s claim to be guarantor of the security of its allies and protectorates into question, however proficient the U.S. may be at assassination by drone. And the capacity of American consumers, and those in Germany’s European neighbors, to enrich the exporters of Germany, Japan and China reached its limits before the crash of 2008. The U.S. economy will continue to recover, but debt-driven American household consumption can no longer power the world economy.

The outlines of an alternative American grand strategy can be discerned. The too-expensive U.S. pursuit of global hegemony, as I have argued elsewhere, can be replaced by a combination of regional concerts of power and offshore balancing strategies by the U.S., acting as the leading power in a multipolar world, not a quasi-imperial global hegemon. In the economic realm, the unbalanced global economy of the 1990s through 2008 needs to be replaced by a sounder global economy in which China, Japan and Germany rely more on domestic consumption and less on foreign export markets, while the U.S. needs to partly rebuild its manufacturing sector while shrinking its overgrown private financial sector.

But these shifts, though beneficial to all sides, will be resisted by incumbents with stakes in the present order. Those vested interests include not only managers and workers in the overbuilt German, Japanese and Chinese manufacturing sectors, but also many careerists in America’s military-industrial sector, which is too large in relation to any conceivable threats and to the U.S. economy as a whole. The Hegemony Lite strategy that Obama has adopted and that Hagel, if confirmed as defense secretary, will help to oversee is cheaper than the neoconservative version of U.S. global hegemony. But America needs an alternative to the hegemonic strategy, not just a prudent, streamlined version of it.