Brent Musburger and Kirk Herbstreit made fools of themselves during last night's BCS title game. Watch and cringe! 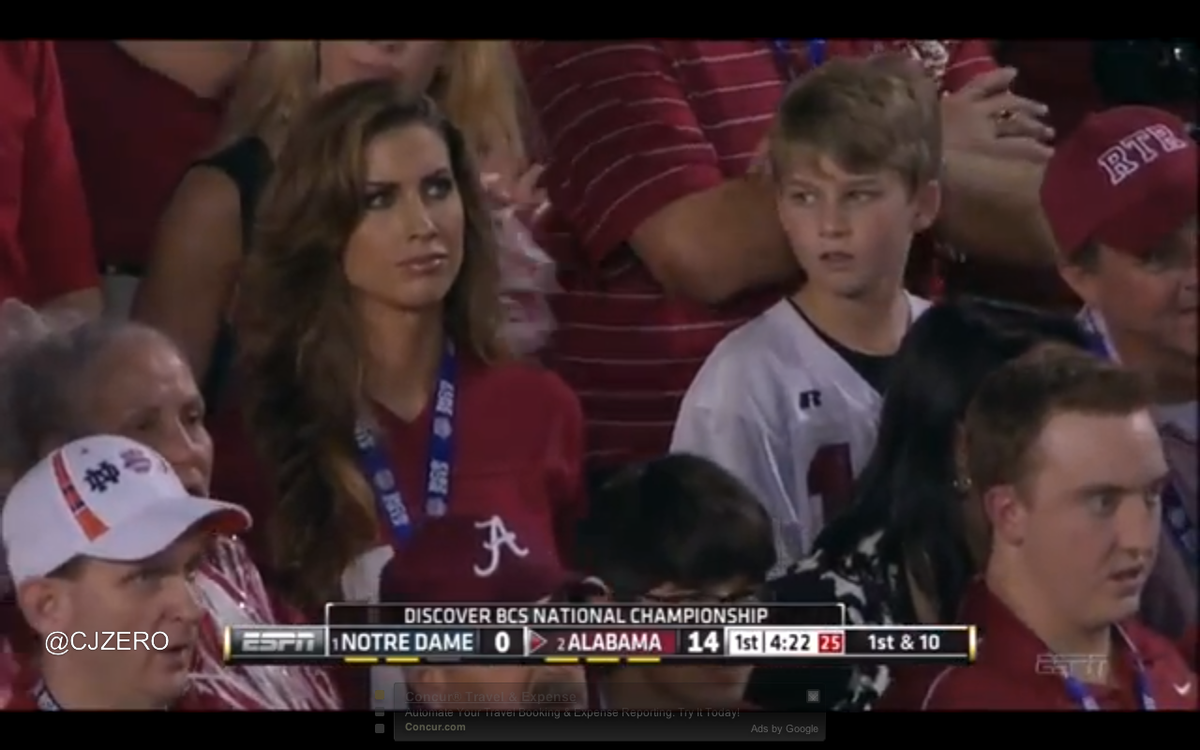 So there was a big football game yesterday. And while I boycotted it, apparently ESPN announcers Kirk Herbstreit and Brent Musburger had some time between plays to devote to ogling the Alabama quarterback’s girlfriend. Some real classy stuff:

“When you’re a quarterback at Alabama, you see that lovely lady there? She does go to Auburn, I’ll admit that, but she’s also Miss Alabama, and that’s A.J. McCarron’s girlfriend. Wow, I’m telling ya, you quarterbacks, you get all the good looking women. What a beautiful woman! Whoa! So if you’re a youngster in Alabama, start getting the football out and throw it around the backyard with pops.”

This is some pretty standard objectification. So common–especially in the sports world–it’s almost not worth commenting on. Except that we’ve had occasion to illustrate posts with a photo of a girl holding a sign saying “I am more important than football” not once but twice this week.

So, now seems like a good time to point out that this bullshit is part of the rape culture that directly enables assaults like those in Steubenville and Notre Dame. As Travis Waldron writes, “It’s a culture that views women as nothing more than chattel, a commodity to be won by the best player even if she isn’t a willing participant. It fosters a sense of entitlement to women and their bodies that only ingrains the rape and violence culture deeper into the game.”

This is why we are not surprised when football players–or other high-profile male athletes–are accused of rape. And I think it’s also the reason that the response from the broader sports community–from coaches, administrators, fans–is so often to rush to defense of their players.

Because, in some ways, it’s their fault too. This sense of entitlement is learned–after all, football players are not born believing that because “we like watching them run a ball down a field” they can do whatever they want–and then it is reinforced over and over again. One of the most infuriating articles I’ve read recently is this 2008 piece about the rape accusation against Jerramy Stevens and the University of Washington’s response. Stevens comes across as awful, obviously, but the people–the entire institutions–that enabled his behavior for years are arguably even worse.

If football players think they’re entitled to women’s bodies, it’s because we’ve made it pretty clear that we agree. It starts with teaching boys that being a QB means “you get all the good looking women” and, through a seemingly endless supply of “second chances,” just never stops.