It's less of a pipe dream than you might think. A new program could bring affordable care to the poor 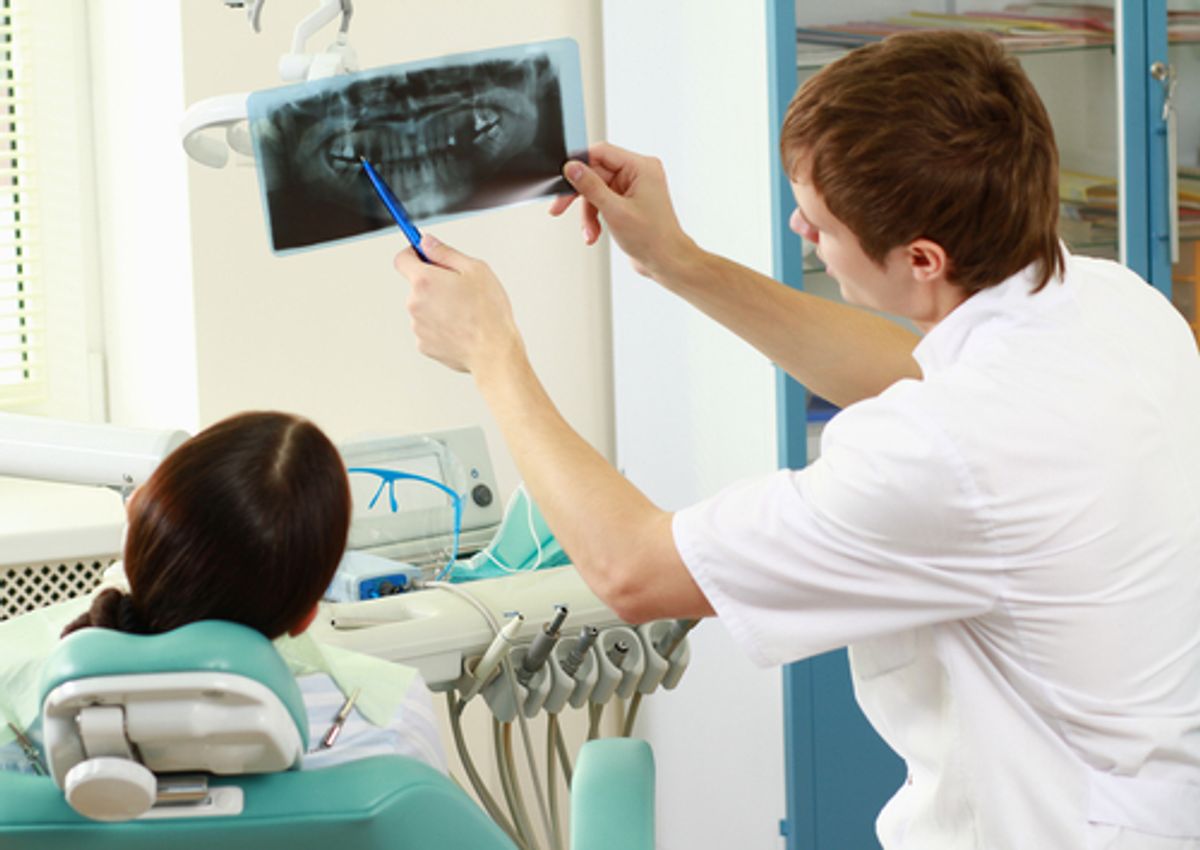 Nothing rattles the mind quite like a toothache; anybody who’s suffered one can attest to that. What’s less appreciated is that poor oral health can throw the rest of the body into disarray as well. Research has linked gum disease with diabetes, heart and lung ailments, strokes, and premature births. Children who don’t see a dentist are more likely to miss school because of infected teeth and gums, and to grow into adults with serious dental problems. And missing teeth make it all but impossible to secure a middle-class job. Dentistry, it turns out, is destiny.

It’s also a scarcely acknowledged front in the country’s growing inequality crisis: according to the federal government, 49 million Americans, most of them in the sorts of rural areas that cover large swaths of the West, live in places that have an official dentist shortage. Many more Americans—as many as 130 million—have no dental insurance; that’s nearly three times as many as lack medical coverage. And the existing dental system is uniquely ill-structured to provide a broad safety net. Ninety-one percent of dentists are small-business owners who bear all the risks and costs of running a practice. For fear of operating at a loss, a great many of them refuse to treat patients who receive dental coverage through Medicaid, because the program’s reimbursement rates to providers are so low. And there is seldom a good business case for opening a dental practice outside the bubbles of affluence in urban and suburban America. Despite its basic importance to health, dentistry has become a luxury item.

In recent years, a small movement of reformers has rallied around a solution. The idea is to supplement the country’s system of private dental practitioners with a corps of “mid-level providers”—nurse practitioners, essentially, for the world of teeth and gums, who can operate out in the field. It’s not an untested notion. At least 54 countries, including Canada, Australia, New Zealand, and the United Kingdom, have expanded their workforces with these so-called dental therapists, with splendid results.

So far, though, just two U.S. states have embraced a move toward mid-level providers. In 2005, a corps of “dental-health aide therapists” began serving Alaska Natives in that state’s vast stretches of remote, underserved, and apparently toothache-ridden territory. In 2009, Minnesota passed its own legislation to begin licensing dental therapists to fill cavities and perform some extractions. (Complex surgeries, root canals, and bridges remain the province of dentists.) Today 16 are registered in the state, several of them former dental hygienists who completed a special master’s degree program to earn their new license. Testifying before the U.S. Senate in 2012, a longtime hygienist-turned-dental-therapist from the outskirts of Minneapolis made a rousing case for the role. “No longer will seeing a dentist be the only means to entering the dental system,” Christy Jo Fogarty declared. “This means schools, nursing homes, community centers—really anywhere with a power source—can become a place to receive dental care.”

This idea might seem about as controversial as brushing before bedtime. But it has encountered a trenchant, strategic, and well-funded opposition. Who could possibly mount such resistance? That’s right: dentists.

CHRISTY JO FOGARTY DOESN’T LOOK LIKE MUCH OF A BARBARIAN AT THE GATE. Wearing blue scrubs, a face mask, and protective eye gear, she speaks in a soothing voice, perched over the open mouth of a boy stretched out in a dental chair. The boy’s mother, an immigrant from Somalia, watches quietly from the other side of the room. Fogarty works for a nonprofit clinic in northeast Minneapolis called Children’s Dental Services, which serves low-income patients who typically don’t get routine dental care. “Once you have a child in the chair, and they’re cooperative, you want to get everything done that you can,” Fogarty explains. If you put something off until a second appointment, she says, the patient may not return.

Fogarty’s license stipulates that she must devote at least 50 percent of her working hours to the dentally underserved, whether they be uninsured or low-income patients or those in parts of the state designated as “dental-health shortage areas.” As a dental therapist, Fogarty must operate under the same roof as a supervising dentist. Aside from that—and the fact that the assistants don’t call her “doctor”—Fogarty is nearly in​distinguishable from the dentists working at Children’s Dental Services.

Once she has notched 2,000 hours as a dental therapist Fogarty will be eligible to take a certification exam to become an “advanced dental therapist.” That designation will turn her loose to work off-site, in mobile clinics, nursing homes, emergency rooms, and the like—still under the “general supervision” of a dentist, but free to roam.

This long leash is what concerns dentists. The American Dental Association has declared itself “unequivocally opposed” to the mid-level-provider model, and has reportedly spent millions of dollars resisting its spread, raising fears that this new, less stringent licensing standard will create a two-tier dental system, with a first and a second class. In the legislative debate leading up to Minnesota’s decision to start licensing dental therapists, the state’s dental association opposed the move by arguing, “All patients should receive the same high-quality dental care.” The group ran newspaper and radio ads proclaiming, “The last thing you want to hear when getting dental care is ‘uh-oh.’”

Some economists might suggest that dentists have an ulterior motive in opposing mid-level providers. After all, preventing less expensive professionals from entering a market is an age-old way of keeping prices high. And in the case of dentistry, it’s not even clear that higher barriers to entry are a great means to ensure better quality. In 1999, two economists, Morris Kleiner and Robert T. Kudrie, examined the dental records of military personnel who had moved between U.S. states that had varying degrees of licensing stringency; they found that “tougher licensing does not improve outcomes, but it does raise the prices and earnings of practitioners.”

In at least one respect—cost—dental therapists do establish a two-tier economy of dental care. Sarah Wovcha, the executive director of Children’s Dental Services, says a dental therapist costs the clinic $43 an hour, compared with $75 for a new dentist; a fully qualified advanced dental therapist, she expects, will run about $45 an hour. Over the course of a year, that adds up to $60,000 in savings per dental therapist—savings that will free up the budget for more staff, and hence more treatment. And that’s not the only way dental therapists are increasing productivity. In terms of dental procedures administered per hour, Fogarty is currently the clinic’s fourth-highest producer on a treatment staff of 17, according to Wovcha. (That might be because Fogarty has worked in the dental field since 1995. Most of the nonprofit clinic’s dentists are fresh out of school.)

Having employed Fogarty and another dental therapist for several months, Wovcha has little use for the “two tier” argument. “What dentists are saying is, ‘Poor people are going to be served by dental therapists, and wealthy people are going to be served by dentists.’ Well, the issue here is that many dentists weren’t willing or able to serve the poor,” she says. “Their argument is, ‘We’re not serving them, but you can’t either.’ So we created an affordable, quality workforce model. To me, that’s not a second tier of care. It’s an ingenious innovation.”

At this point, the Minnesota Dental Association’s line on dental therapists is not so much that they are scary, but that they are no silver bullet. Dr. Mike Flynn, the new president of the association, happens to run a practice in a federally designated dental-shortage area, so he is well acquainted with the access crisis in American dentistry—and mid-level providers won’t solve the fundamental problem, he says. The root issue is Medicaid reimbursement rates. “It doesn’t matter if it’s a dentist or a dental hygienist or a dental therapist. If they don’t get reimbursed properly,” he says, “access to care is compromised. It’s a funding issue rather than a lack of workforce.”

Medicaid funding may be dangerously threadbare, but that doesn’t undermine the case for lower-cost, mobile professionals—especially considering that dental shortages are projected to grow worse in the near future. When all of the oral-health provisions of the Affordable Care Act have come into effect, by 2014, about 5.3 million more children nationwide will have dental coverage, mostly through public programs such as Medicaid. Perhaps that’s why Oregon has set up a dental-therapist pilot program, California is studying the option, and several other states are looking into the model, too.