Is the "Beasts of the Southern Wild" filmmaker an interloper?

Benh Zeitlin, a New York native, explains how he can make a film about southern Louisianans living off the grid 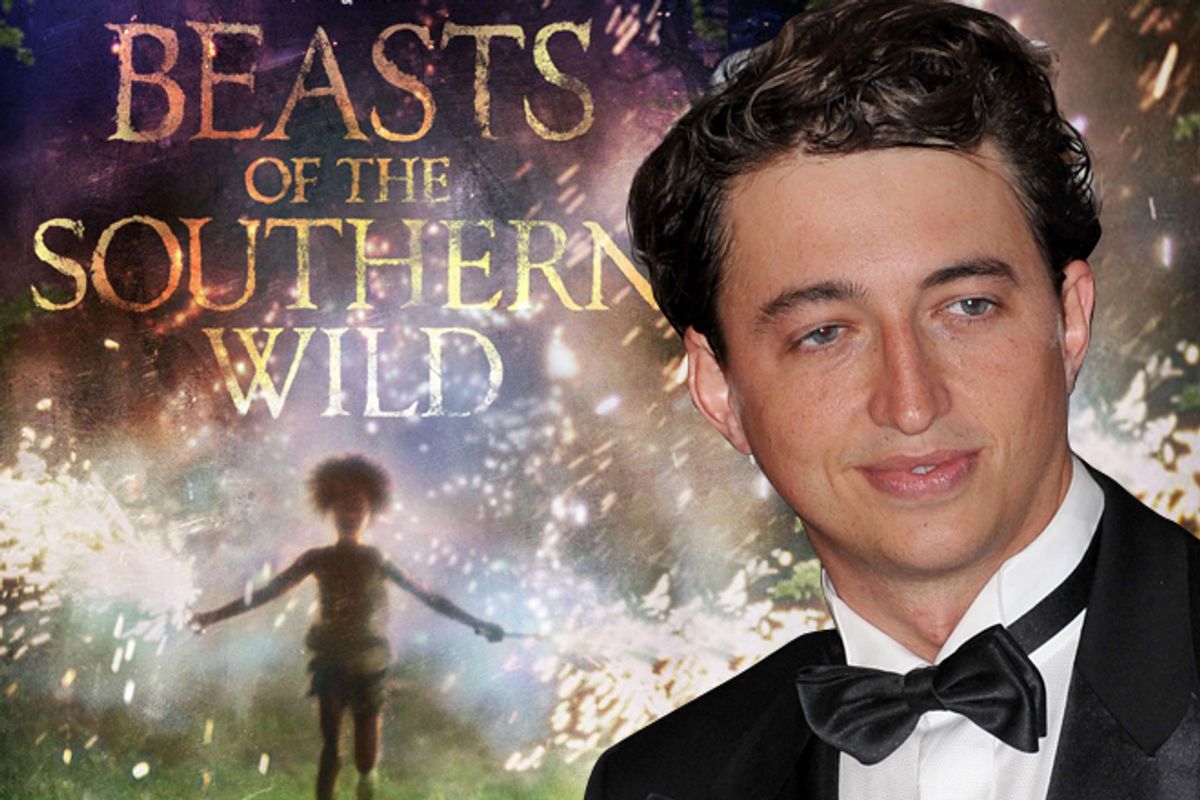 At 30, Benh Zeitlin has been one of the year's most-discussed directors. His first film, "Beasts of the Southern Wild," a story of a journey to semi-maturity undertaken by a motherless young girl in a mystical reimagining of the American South, has been widely acclaimed since its screening at Sundance in January. It was released in June, and is now considered a contender in several Oscar categories, including best picture, best adapted screenplay (Zeitlin and Lucy Alibar adapted the script from her play "Juicy and Delicious"), and best actress for preteen lead Quvenzhané Wallis. We spoke to Zeitlin about his own migration from New York to New Orleans (he moved South full-time in 2006) and casting roles for the fantastical "Bathtub" in which his characters reside.

You’ve talked about, in other interviews, having moved to New Orleans from New York. What’s the point at which you felt as though you could say you were from there? Or are you still working toward that?

I do work toward that, but that never happened. I feel like I belong there, you know? But I’m always going to be this kid from New York who moved to New Orleans; you don’t just become a native New Orleanian, you know, it doesn’t happen. I’m like a transplant. That’s my official title in New Orleans. But it feels like home.

So you’re there to stay?

I think it’s the same thing you can say of anywhere — you know, you’re not like born in New York, you’re not a New Yorker. When I get homesick, I’m homesick for New Orleans, and that’s as good a sign as any.

The film clearly doesn't exactly depict New Orleans, but there are some similarities, and it’s definitely in the same region of the world, and so I’m wondering, was your outsider perspective effective, or was it something you had to work against?

I don’t know. It’s sort of hard to comment on your own perspective, because you kind of live inside of it, you know? I had to learn a lot, and rely on a lot of other people to make sure I was getting things right. It was an incredible resource to have a cast that was all born in south Louisiana, so everything that was being said had to sound right, had to feel right to them. We did kind of interviews and worked with them to get the story to feel like it was authentic, and it was true. So it took a lot of work, but I do think that from the moment I came to New Orleans and the first time I saw Louisiana in general, it has this magical quality. It’s so different from where I come from and where I grew up. It has this sort of majesty and magic to it. And I don’t know if it would seem magical if that’s where you were from, because I imagine, people talk about New York, and for me, because that’s where I grew up, it’s normal. So I do think that going somewhere where you’re not from, you see it differently, and it has a sort of magic to it that probably is different.

In one of the film's first scenes, a group of babies of every human shade is playing together. The film is very diverse. So was there any conscious choice to make your protagonists a black father and his daughter, and did that make you nervous as a white person from the Northeast making a film in and of the South?

If there was one thing that we had going in, it was that the Bathtub was going to be diverse, and that was sort of like a representation of Louisiana. The idea of the Bathtub is that it’s this place that people are not separated by age or by race or by politics or by religion; it’s just this unity that doesn’t actually exist in the world. That was sort of the fantasy, this utopian place where people aren’t divided for any superficial reason. As far as who the main character was going to be, that wasn’t really premeditated. We cast the film – we were looking at all races for that part, and it became African-Americans because of Quvenzhané Wallis, and obviously if you can find a 6-year old that can act like that, that’s not a moment of, “Oh, no!” That’s a moment like, “Oh, God, this is a miracle,” you know. So I think that there was a lot of work of getting the voice right, of getting the characters right. It is really the work you have to do no matter what. In this type of a film, working with unprofessional actors, whether they were white or black, they were going to be from south Louisiana. I don’t talk like that, from south Louisiana, like, I’m a Caucasian, you know … so that work was going to be done regardless.

I think it exists. You know, south Louisiana is a wild place. When you get to the bottom of the world and get past it and you go into the wild, this place where there’s real freedom and no rules, when you get past the road and you take a boat down and you get off the grid, there’s this wildness and this freedom that exists that can’t really exist on the inside. You get out there and it’s a different world.

Given that there is no one strong adult figure around Quvenzhané Wallis' character, is there hope for her character by film's end after all the trauma she's undergone?

Yes, definitely. Definitely. To me, it’s like a movie – you’re right, there isn’t – that’s what the film is about. She’s losing literally everything that takes care of her. Losing her place, losing her father, losing her culture, you know, it’s all disappearing. But I think the film is about the process by which this girl internalizes these things and becomes strong enough to survive and that was the note that we wanted to end on. Rationally, you’re like, “Where’s she going to go? Who’s going to take care of her?” But you know she’s going to make it.

Do you want your audience, given how idealized the film is, to avoid thinking about real-world events and just think about the characters? Katrina was hard not to think about.

Katrina is what people have seen of a current natural disaster that is continuing up till now and into the future in south Louisiana, and that really got out into the world. So people think of south Louisiana, they think of what happened six years ago at this point, but, like, there’ve been four storms since Katrina that didn’t get into the news, and south Louisiana is losing land faster than any other part of the Earth. It’s just disappearing. The film is very much about those things. It’s about what it’s like to live there now, and what it’s going to be like in the future, and all the storms that are still to come. I want people to think about the future, more than as an interpretation of the past.

What’s the reaction been among your neighbors who've seen the film?

It's been great. We had to bring in a big unlabeled screen and put it up in the gym and set up chairs in the gym. We had this amazing screening with all the people from the town where we shot the film, and people were really proud of it. I think the fact that the survivors and the holdouts were the heroes of the film, and that there was a pride and dignity in this sort of battle to stay, which is often, in the outside world, really disrespected.

How do you avoid the trap of condescension?

I think you just try to write about things that you genuinely love and respect. It’s not, like, a trick. I think that a lot of stuff that gets done, a lot of art that gets made by people who don’t genuinely love and respect the subject that they’re making art about, and then inherently, you come off, I don't know ... I don't know what the trick is. Everybody on-screen, it’s just people that I love, and places that I love, and so you just have to be sincere about it.