Oscar's fifth slot: Who are this year's dark horses?

The contenders for best actor appear to be a lock, but here are four actors who may surprise us with a nomination 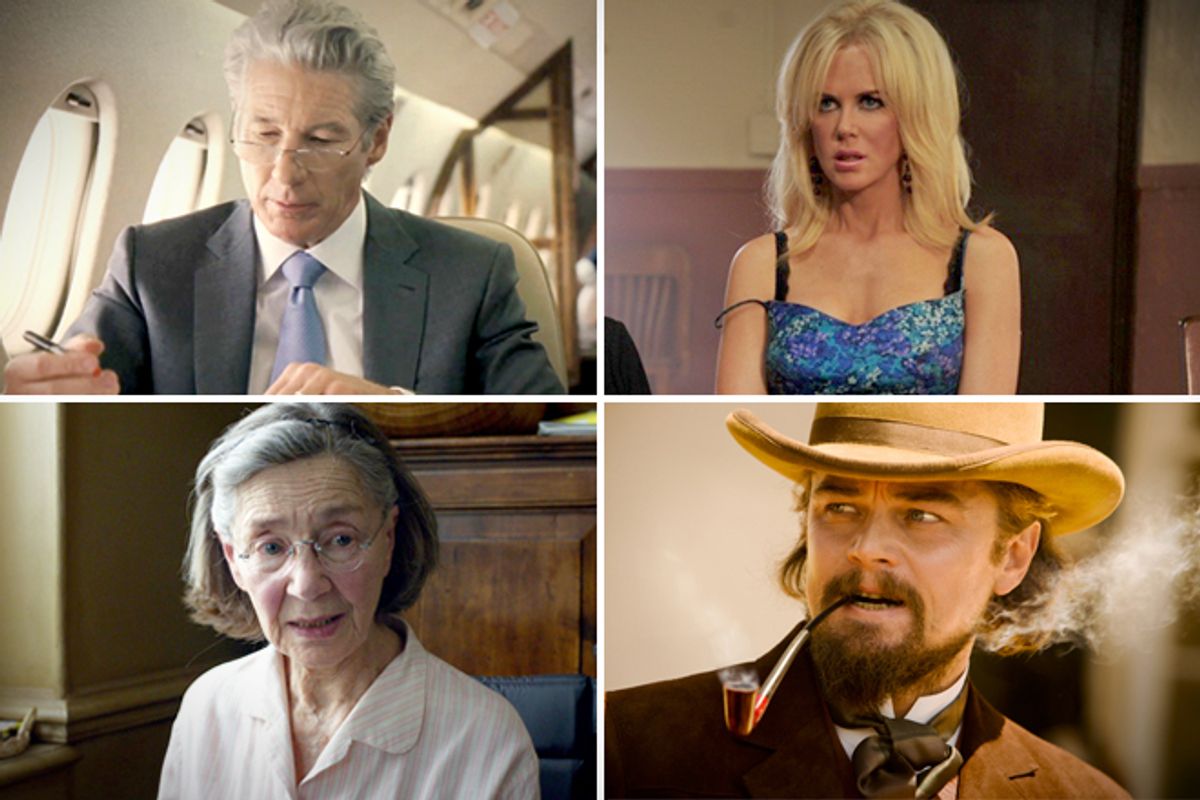 Where have all the surprises gone? Even in a relatively unpredictable year, the acting categories at the Academy Awards have begun to feel fairly fixed: Daniel Day-Lewis will very likely win best actor; Jessica Chastain and Jennifer Lawrence are out way ahead of the rest of the best actress pack; Anne Hathaway's all but unstoppable as the anointed best supporting actress. With such strong contenders, Thursday's Oscar nominations announcement may provide the biggest suspense of the season, as we wait to see if any dark horses, with no real chance of winning, slip into the category's fifth slot. Last year, for instance, "The Girl With the Dragon Tattoo" actress Rooney Mara surprised many by grabbing the nomination that had been presumed Tilda Swinton's, while the little-known "A Better Life" performer Demián Bichir was a shocking best actor nominee. Who is just on the precipice of making it in on Thursday? Here are a few possibilities:

The team behind little-seen "Arbitrage" have been flogging the movie hard with For Your Consideration ads and appearances, and Gere ended up snagging a Golden Globe nomination. The Oscars are a harder field to break into — especially in a year when Daniel Day-Lewis in "Lincoln," Hugh Jackman in "Les Miserables," and Denzel Washington in "Flight" look like a lock, with a couple of other strong contenders — but perhaps Hollywood loves the never-nominated Gere more than we know.

Jennifer Lawrence in "Silver Linings Playbook" came out with an early lead as a depressive widow in this film, and Jessica Chastain's "Zero Dark Thirty" role is a formidable contender, too. There are several women (Naomi Watts in "The Impossible," Marion Cotillard in "Rust and Bone," Helen Mirren in "Hitchcock," Quvenzhané Wallis in "Beasts of the Southern Wild" — well, she's more of a girl) jostling for a few spots, and Emmanuelle Riva's never quite had the loudest buzz. As a dying woman in the critically beloved "Amour," Riva would seem like a strong contender, but her feel-bad film might be too depressing for a populist voting body, and her advanced age (she'd be the oldest nominee ever) and language barrier (Marion Cotillard is in a stronger position--could two nominees come from French-language films?) work against her.

"Django Unchained" has a bit of a supporting actor problem, with three former nominees gunning for limited spots (Alan Arkin in "Argo," Tommy Lee Jones in "Lincoln," and Robert De Niro in "Silver Linings Playbook" all look like shoo-ins). Christoph Waltz is really the film's co-lead, and won recently enough that he seems like a non-factor; Samuel L. Jackson and Leonardo DiCaprio, though, both seem like credible potential nominees, as long as they don't eat into each other's votes. And Leonardo's had more luck with precursor nominations.

This is a tricky one: Kidman's been nominated for both Golden Globe and SAG Awards for her racy role. While Sally Field and, especially, Anne Hathaway, have sucked up attention for their respective roles in "Lincoln" and "Les Miserables," Kidman has gotten the two biggest precursor nominations. And yet it's somehow impossible to imagine the fuddy-duddy academy going for a role in which a prior winner urinates on a 20-something heartthrob, or masturbates in a prison. It's just not the sort of thing you can imagine a 67-year-old movie producer voting for over a safer, more respectable option — like sweet little Amy Adams in "The Master"!